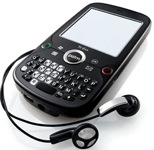 Word of a official announcement was first posted on Electronista, the Register and subsequently Slashgear and shortly later recapped by Engadget. There is no word of the Treo Pro on Palm.com's site and PalmInfocenter has not received any sort PR statement from Palm regarding the device as of this writing.

By now nearly every aspects of the device has been leaked online including numerous rounds of spy shots from multiple sources, some with uncharacteristically good resolution. The Treo Pro is expected to sport a Quad-Band GSM phone with Tri-Band 3G HSDPA support. It is said to run Windows Mobile 6.1 Professional on a 400 MHz processor with a 320x320 pixel flush touchscreen, 256MB memory, microSD expansion, built in Wi-Fi, Bluetooth and GPS.