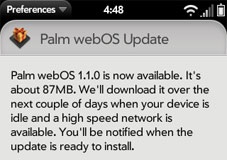 Palm has just released webOS version 1.1.0. The system update for the Palm Pre is available now, over the air via the built in Update application. The new build of webOS adds a few new features, builds out Exchange EAS support, includes a new NFL app, brings some bug fixes to existing apps and restores iTunes media synchronization with the latest version of iTunes (v8.2.1).

The update weighs in at 87MB. Palm's support documentation details the full release notes, which are also mirrored after the break.

I was hoping that they wouldn't let Apple cow them on the iTunes issue. Not out of any actual like for iTunes, but just the principle of the thing. Keep it up Palm.

This thing with Apple is getting fun. Palm is actually getting interesting again. Maybe next they'll do an "iPhoney" skin for v1.11. I love it. C'mon AT&T, get WebOS to me and I'll sync it with iTunes even tho I don't use iTunes. :-)
Pat Horne

In Thursday's "Sell Block" segment, Cramer said it's time to take profits and sell Palm (PALM Quote). He said there's only one king of the smartphone market, and that's Apple (AAPL Quote).

Cramer said when it comes to Apple versus Palm, you simply cannot compare the two companies. He said a few months ago that Palm's stock was left for dead, and was only saved by its introduction of its "Pre" smartphone. But now a month after the Pre's release, criticism is mounting, and rumors abound about high return rates for the device.

With Palm stock up a staggering 360% for the year, Cramer said the trade is over in Palm. He said ever since the introduction of the Pre, Palm's stock has been slipping, a trend that's likely to continue.

Cramer said Apple is the only stock to consider in the smartphone arena. The iPhone, with its iTunes and hugely successful app store, make it the king of the castle, said Cramer. Palm, he said, has run its course.

Look at the volume numbers. Cramer is correct. It's time to unload, or better yet, short. Do you have the balls, Gekko?

my investing philosophy since 1995 -

Sell now, before Pre is available on all the major US carriers? Before the full international release? Before the next webOS device is even out?

You'd be crazy, man. Palm's still at the bottom of a very, very long ladder. Nowhere to go but up.

"Beware of acting on insights of the market that you think are yours alone. Millions of investors are likely to know something that you believe you are discovering."  John Bogle

It's time to take profits on Palm, Cramer told viewers on Thursday. Investors who want a play on smartphones and the mobile Internet should buy Apple instead.

"Apple's the better company with the better product," the Mad Money host said.

Apple's [AAPL 157.69 0.95 (+0.61%) ] new iPhone 3GS launched barely two weeks after Palm's [PALM 14.139 -0.231 (-1.61%) ] much-hyped Pre and quickly stole the show. It took only three days for Steve Jobs' company to sell a million units. During this week's earnings report, Apple said it couldn't keep up with the demand for the sleek handset. Consumers love the operating system, the iTunes platform and the App store, it seems, making it all but impossible for Palm to measure up.

Official sales numbers for the Pre haven't yet been released, but Barclays said that demand tapered off in July. Complaints are rolling in about both the software platform and the hardware, and Jesup & Lamont put the return rate at as high as 40%. When you factor in that the Pre's carrier, Sprint [S 4.66 -0.12 (-2.51%) ], lacks the marketing muscle of AT&T [T 25.48 0.64 (+2.58%) ], the iPhone's carrier  and marketing is crucial in this business  there seems little reason to continue holding onto Palm. After all, the Pre was supposed to be this company's future, and that future is looking rather dim right now.

With the iPhone, the still-popular iPod and a computer business that is "exceeding expectations despite the slowdown," Cramer said, Apple is the stock to buy. He thinks AAPL could reach $200 in the next few months.

As for Palm, Cramer put that company in the Sell Block.

Watching the video convinces me that anyone who took financial advice from that drongo deserves to be parted with their money. Isn't this the same guy that Jon Stewart called out for advising that hedge funds spread false rumours about products to drive down stock prices?

my investing philosophy since 1995 -

Sissy. Short Palm. (Maybe I should post this on Yahoo message boards in order to get SV to do it?)

The thing is, the Palm vs. Apple comparison is still silly. Palm isn't going to come anywhere near iPhone numbers (or Blackberry), but they don't have to. The real question is who is going to emerge in third place, and I'd say Palm is a good bet.

Yes, the stock is up a lot over pre-Pre prices, but back then Palm was teetering on the brink of disintegration. The company still might tank, but it seems more likely to start easing back into profitability.

> ..Isn't this the same guy that Jon Stewart called out for advising
> that hedge funds spread false rumours about products to drive
> down stock prices?...

^^ And that makes it ethical?

Cramer is full of crap. That's been established (but not by Jon Stewart).

On the other hand, I would agree with shorting Palm for one reason: they are deliberately picking a fight with Apple. Apple is not afraid to set their lawyers loose and Palm is practically begging for it. Do they have the cash to survive a protracted legal battle? Apple has over $30 billion in the bank.

Palm should grow up and just licence iTunes sync or find a better solution.

> ...Palm should grow up and just licence iTunes sync or find a better solution.

[but Apple's apparent methods for protecting from other folks syncing iTunes as an Apple device REALLY appear to be DUHmb - this time using a USB Vendor ID or something like that?]

Palm has told Apple that they have lawyers and patents, too. Apple has clearly decided they don't want to go to war with Palm over patents.

The iTunes sync is as much gamesmanship as anything, there does not appear to be a legal route towards stopping Palm, otherwise Apple would have leapt on it already.

I am not sure the Pre will win third place, but I think there is still money to be made, especially because I suspect that at any sign of a major misstep and Palm will be bought out quickly.

Not at a minimum price of $3 billion if NO premium is paid over the current price, it won't!

This has to be the most updates palm has ever issued for one of its OS. Go Palm. Can any palm history buffs verify this for me. Did Palm ever issue updates without a new device?

RE: Most updates ever

Yep, no doubt. I heard that Ruby was bringing Cobalt 6.2 on board for the low end this fall. Should get interesting folks. :-D
Pat Horne

Vaporware. It doesn't really exist. Everyone knows that Palm doesn't upgrade the software in their devices.

Let's see Palm release a 2.x update a year from now, or a 3.x update two years from now for the Pre .

Then I'd agree that the company has turned around.

And when that happens, you'll conveniently move the target again.

** Then I'd agree that the company has turned around. **

Saved for next year. If you haven't changed screen names, then we'll bring it out and wait for you to go loooong baby!
Pat Horne