A new report out of Taiwan claims that the contract manufacturer for the upcoming Treo 650 Smartphone has stated volume shipments of the new model. 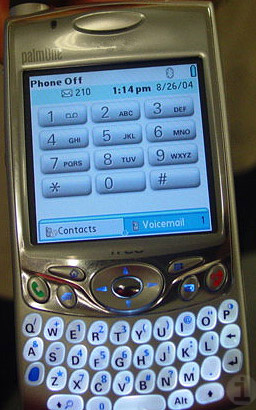 Digitimes, is reporting that High Tech Computer (HTC) began volume shipments of a new PDA phone model to PalmOne this month and is slated to enter mass shipments in October, according to market sources. It was reported in May, that HTC had won a contract for the next upgrade of the Treo 600.

According to current speculation, the next Treo will retain the same basic form factor and layout with a number of refinements and improvements, most notably a new high resolution 320x320 pixel 65k color TFT display and integrated Bluetooth. It will be powered by Palm OS 5.x, have 32MB of RAM and run on a 312 MHz ARM processor.

The upcoming smartphone will also have a improved 1.3 Megapixel camera with digital zoom and video capture, new dedicated answer and disconnect phone buttons and a SD/MMC expansion slot with SD I/O.

From the leaked pics that circulated earlier, it does not appear so. :( There is a small circular mirro on the back next to the cam that some had earlier mistaken for a flash, but that is only to help with self portraits...

Guess I shall wait for the Treo 700 or 800 or whatever and keep hoping.

The 650 might be the tie-breaker for me. The real issue is reliability, though. The more devices you combine, the more important it gets. I once had a Treo 270 hard reset on me while on a business trip - fortunately I had my phone numbers in my phone, too. (Yes, the 600's have SD card backup.. indispensable.)

While I never really used one, I feel that the two devices could have been integrated in a way that makes the phone unit independent enough to at least receive calls while the palm part is busy with hotsyncing/restarting. Why insist on one processor handling it all. (I suppose it COULD handle it all - except restarts - if it was programmed to do so. But I digress, it's enough to look at the sorely lacking in innovation PIM functionality provided to see that there is no genius at work there currently.)

In the face of falling stock prices, I am guessing the former and they may have even contributed to the "rumor" to try and create hype.

In any case, it is a nice device!

just_little_me @ 9/13/2004 7:11:20 PM #
I don't believe many companies would actively promote rumours of new devices this far out - the main reason being that it KILLS current sales. The last thing palmOne want is a boat load of 600's that they have to take back from resellers, etc and then use as doorstops...

patchwork @ 9/13/2004 7:53:12 PM #
Remember. PalmOne doesn't have those kinds of stock problems with the Treo 600. In fact, they can't seem to manufacture enough of them to keep up with the demand. Allowing this rumour to continue might actually help them a little bit, in that it will certainly take some pressure off the current model.

hkklife @ 9/13/2004 8:41:01 PM #
Yup, I see a rejuvenated Treo 600, probably with a few core OS/app updates (unifying browsers, more apps built into ROM etc) hanging in there for another year or so. Other than the low-res screen, its specs are still very competitive in the smartphone market and, much like the T|C, just needs software updates to be brought up to date for the most part.

I think it's funny how the Treo 650 has had much more concrete information and high-quality shots compared to the T|E2/T5 yet there's been far less buzz about it on any site other than Treocentral. I suspect P1 "wants" Treo 650 info to leak out (ie keep up the 600's existing momentum) but wants to keep a lid on any new PDAs.

Jaske @ 9/13/2004 11:20:26 PM #
If you compare this dream Treo with other branded devices, and you forget "25%+ Smaller/Lighter" and ad an other 64 MB RAM, what is so special about this Smartphone?
I really doesn't understand the meaning of that stupid thumboard (especially not now with the new virtual thumboard recently announced on PIC)

No, I'm hoping the Tooth Fairy will leave it under my pillow for me.

of course, by the time the rest becomes reality this may change.

I think this is a rather difficult feature to overlook. Having spoken to others with smart phones, I believe the form factor is quite an issue. One individual actually keeps a separate phone as well as the smart phone (the other was too clunky to use). Some of those 'other-brand' devices are reminiscent of those old bricks that were used in the early 90s.

I believe many of the current smart phones are only 200MHz  too slow for that other clunky OS they use. Apps like Skype (Voice of IP software) require 400MHz from other brand OS. Ha ha. However, I understand that a Palm OS version of Skype is to be released in October. I am hoping that Palm OS version will not have such a high processor requirement. In any case, the Treo will run like lightning.

I am certainly no expert on smart phones. However, I think its fair to say that the rave reviews the Treo receives speak for themselves.

justauser @ 9/14/2004 3:47:36 AM #
Yeah - Skype requires WiFi. I'm assuming Palm will provide drivers for their WiFi card for this Treo and all other NEW PalmOne releases predicted for the next month or so. They'd be insane not to. Of course there may not be enough juice supplied to the Treo SD slot to power a WiFi card. But as there are alternative smartphones emerging that have Bluetooth and WiFi built in, it would be sensible to at the very least offer the SD option for those who can't live without it. Mind you, I'm also assuming the Skype Palm version will run on this device - Too many assumptions. My point really was that this device looks quick where most other offerings have had to slow the processor down significantly for the sake of battery life.

Sounds like you're waiting on the i500 or 530 then. Samsung uses those same form$ & exchange the guts.

tupai @ 9/15/2004 7:46:59 PM #
A phone without a thumboard or any type of keyboard will immediately render the phone useless (at least in my experience with normal phone and treo and tungsten W). Do you envision to drive and pull out stylus just to dial a number? Yes, there's voice dialing, but that's still not a reliable solution in a crowded/loud area.

justauser @ 9/16/2004 5:29:19 AM #
Agreed. Mobiles require quick access to answer/ dial/ hangup functions. Nothing quicker than dedicated hard buttons. I don't think you need market research to tell you that most users will be looking for these buttons.

I didn't say no hard buttons, just no thumboard/keyboard.

acidreflux @ 9/24/2004 9:18:22 PM #
I really dont understand how people are saying that this is photoshopped, because a chrome finish is really hard to do and look realistic. Secondly, it looks like there is some reflection to the metal, which is very hard in photoshop. third, when you blow it up in photoshop you dont see a bunch of pixels distorted, or inconsistencies with the pixel pattern of buttons and so forth. anyways, may not be real, but sick of hearing virtually no good reason of why it is false, or people saying what palms direction in the future is or will be. just rediculous.

sandys @ 9/14/2004 7:17:27 AM #
I grudgingly moved away from palm (treo 180G) a long time ago when I was after a decent convergence device and there was nothing out there IMO to match the P800 in size and functionality, this 650 looks like what I was after back then, the p800 software base in no way matches the Palm and I'd be happy to go back if it has this screen and working bluetooth profiles for headset etc. along with standard memory etc. the P800 has been good though no real complaints has done everything I wanted from it, I just miss some of the apps I used to use on palm which were better thought out than the p800 equivalents I swapped to.

Where can i pre-order?

RE: Where can i pre-order?

tupai @ 9/15/2004 7:49:41 PM #
palmOne hasn't even announce that they are making the device, so there's no way people are taking pre-order at this point. Hopefully it's sometime before xmas, I would pre-order it as soon as it's announced. I used treo600, and loved it -- the only complain is I wish the screen was high res. But if this device is true, it's a perfect phone for me, and sell my treo600 on ebay :)