More pictures of the rumored palmOne Treo 650 have been posted. The new pictures show more angles of the upcoming smartphone and confirm additional details.

Like the previous photos, the pictures come from a discussion thread on TreoCentral. The images show a dark blue hued palmOne Treo running on the Sprint Network.

According to current speculation, the Treo 650 will retain the same basic form factor and layout with a number of refinements and improvements, most notably a new high resolution 320x320 pixel 65k color TFT display and integrated Bluetooth. It wil have 32MB of RAM and run a 312 MHz ARM processor. It also includes a new 1.3 Megapixel camera with digital zoom and video capture, dedicated answer and disconnect phone buttons and a SD/MMC expansion slot with SD I/O.

The new photos confirm the Treo 650 will run Palm OS Garnet v5.4.5 and will have 20MB free of usable RAM. Also shown is the removable 1900 mAH Li-ion battery, and increase in capacity over the treo 600.

The previous source image lists the release timing as Fall 2004, but does not offer any other details on price or availability. You can click on any of the images for the full size view. 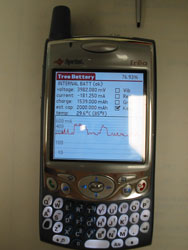 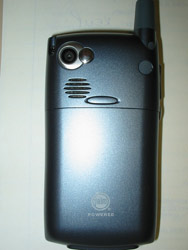 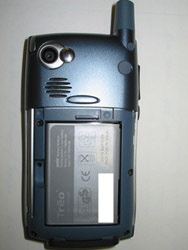 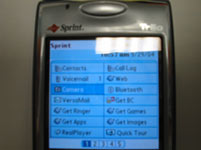 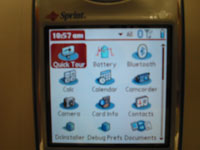 Thanks to Gaurav for the tip!

Quickster @ 9/29/2004 8:38:05 PM #
First thing I noticed about these new pictures is that this keyboard once again has the highlighted number keys which is a very good thing indeed. And if this new model was available I would have mine right now.

This could have been it, but I need my memory (I try to avoid external storage... VFS bugs me).

In fact if you compare this to most smartphones (its competitors) then the specs are quite impressive.

I was hoping to run my Navman GPS gear on it - but with only 20MB free it will be impossible with everything else I need. Might have to go for the T5 - with the virtual SD card in it I can put all my maps on that, and leave my SD slot free for... umm... something...

Still has an antenna and low RAM

Also I miss the FM Radio support. BUt ok, it Palm and they are sloW!

What is the capacity of the battery on the 600?

Estimated capacity is 2000mA and the battery is listed at 1900mA?

Alert Scully and Muldar! The game is afoot and we can be hoodwinked!!

Given the vagaries of manufacturing batteries and electronics, I find a 100mA "discrepency" not worthy of a post.

Perhaps that's why the est cap: is used instead of guar cap:.

Wuju @ 9/30/2004 9:40:02 AM #
Anyone knows if the built in bluetooth technology accept voice communication like Sony Ericsson Bluetooth headset at all? I would like to use it with the Treo650 to speak wirelessly as well as using the regular wired headset. Thanks.

Wuju @ 9/30/2004 10:37:17 AM #
I hope so because one would want a bluetooth on the phone for wireless data transmission with your notebook for sync or web access but it may not able to do wireless voice communication hence my original question.

look ppl these are real pictures....

What is on the back?

HFranks @ 9/30/2004 2:57:50 PM #
Now all I need is the blackberry connect software to be released and I can kill off my Palm T3 and Blackberry. Palm and RIM keep announcing the blackberry connect (back in May/June and now this week) without ever committing to a release date. Come on PalmSource/RIM - lets get the software out there. I'm tired of carrying two devices.

I'll also second the choice for more memory. A Secure Digital card is fine, but it doesn't work for programs that need to be synced.

Actually that is not true.. If you get a launcher program called Launcher X, you can save a very small shortcut on your PDA which will then allow programs on the card to be synced. Obviously you must have the card inserted, but outside of that, it works great. I use this method to get Avantgo to sync from the card. I keep the main program on the card saving 953k on the Palm, and the shortcut is only 385 bytes.

How about waiting a little longer for Treo 700???

GearHead @ 10/7/2004 1:07:13 PM #
I wish this was the first Treo to be announced, with all these goodies. I think Plam 1 needs to come up with a better Treo to compete with new HP, as far connectivity goes.
Following could be the specifications.

I think this is the ultimate Treo to stir the market aound the globe. Definetly a winner.

You never know, may be it'll happen.

I bet they will call this Treo 700 and will be available by December 2005!

anyone used the Treo 600 with Fido in Canada

With an unlock Treo 600, anyone used it with the Fido carrier. Any problem with performance or service. I would like to get the 650 and I imagine if it works woth 600, it will work with 650 as well as long as it's unlock. thanks.

Anyone tried the GSM server for Treo 650 unlocks? http://www.fasttutorial.com/treo650

they are helpfull with the unlock and firmware upgrades
they helped out a lot. They sold me a treo 600 and 650 that I use in canada and it works very well.

Thanks for the help guys

to unlock my Treo 650. it worked without any hassle, the software and instructions link is http://www.irwebonline.com/acatalog/treo-unlock.htm