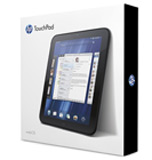 HP's TouchPad is not only the first ever non-smartphone WebOS device, but also the first non-phone "Palm" device since 2005's TX and Z22. As such, ever since its February unveiling, the combined HP/Palm entity is placing a tremendous amount of faith that the the TouchPad will spearhead a rebirth of WebOS, now debuting in verion 3.0 form on this device.

Read on for my in-depth TouchPad review.

This is a really good review. The conclusions really seem fair as well. I have a WebOS phone and love the platform. But w/o homebrew overclocking etc, my Pre would be unusable. Seems the same with the new Enyo framework on excellent hardware. Hopefully today's update will make serious strides.
Still holding on to my netbook for power productivity use and not seeing a reason to leave it behind for the TP or even the more mature tabs.
Pat Horne

Overall a good review, but a few points of contention:

As I stated previously, this tablet is almost exactly the same as a first-generation iPad in every dimension, outweighing that device by a few ounces.

Kris, you didn't have a first gen iPad for comparison, but let me say, that while the dimensions are identical on paper, it's the real world differences that count.

The 1st. gen iPad was tapered from the edges and bumped out slightly from the back. This allowed you to easily hold the iPad by the edges. The touchpad is not tapered, and looks to be much thicker (and is much more cumbersome to hold) then a 1st. gen iPad.

While the TouchPad is the most landscape orientation-friendly WebOS device yet, it still feels "best" in in portrait mode, much like iOS.

I disagree here; most iPad apps have support for landscape mode, and IMHO landscape works best on the iPad.

As far as metaphors go, I agree. However, where the metaphor fails is in terms of usability. Closing multiple cards in succession is a bit tedious.
I believe the multitasking gestures on the iPad are easier and quicker to use than webos cards.

"The screen info says: with Capacitive Touch TM. The response is so much better it is amazing!!"

Great review and very useful, thanks.

Of the currently-available tablets, the one I like the most is the Iconia A500. I've tried it and like it, but don't see any killer app for tablets yet that would make it worth getting one - anything a tablet can I do, I would prefer to do on another device I already own. I'm also really interested in the M500, when that comes out, with proper multi-tasking.

Thank you for this fine and detailed review. As always, I really appreciate your wide-ranging comparisons to both the present state of the market and the past glory of Palm OS.