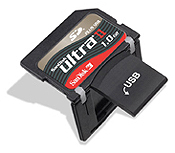 SanDisk has announced that its SanDisk Ultra II SD Plus card is getting a capacity bump to 2 GB. The Ultra II SD card combines USB connectivity and flash memory storage. It works seamlessly in any SD card slot and can also be used as a high-speed USB 2.0 flash drive without the need for a card reader.
Read the Full Article Text Here

I love the idea of this thing...

I love the idea of this thing, but I'd like to hear from anyone who has torture tested it. I mean, my cellphone battery is being held together with duct tape. I'm fairly rough on my technology. If it can't hold up to constant, typical day-to-day usage, then it's useless to me. How well do these SD/USB cards hold up?

I've got one of these and I've been using it for about 6 months pretty actively. So far, so good. The thing is pretty solid. I highly recommend this to anyone if they don't want to hassle with some sort of connection device for their SD cards.

I'd be all over this one BUT I an encountering tons of problems reading/writing to 2gbSD cards in most of the SD slot devices I use between work, home, friends & family.

My Palm TX & Casio digicam have no issues with 2gb SD cards. My Gateway Centrino notebook & desktop PC have no issues "most" of the time but every time I insert my 2gb cards I hold my breath (spontaneuous reboots etc. do occur on a semi regular basis from inserting 2gb cards from any manufacturer).

Several other older card readers don't even see the 2gb cards at all and there are of course no firmware updates for these devices. I received an Epson 4x6" photo printer for Christmas but had to return it (with much grief) because it couldn't see SD cards larger than 512mb.

This kind of confusion and non-compatability is simply unacceptable in this day and age. The SD consortium has simply permitted too many rogue companies to produce non compliant SD cards and too many companies have foolishly imposed SD size limits on their devices. At the very least, everything 2gb and below should be universally accepted. I could see 4gb and up cards being "quirky".

so SD card with USB is a perfect solution for you. You don't need your old SD card readers any more because you can simply plug into your USB port to read your 2GB data. :-)

SIGH...right, but what about when I insert this card into a device that doesn't have a USB port on it? MANY devices have just an SD slot and nothing else

I am specifically speaking of issues related to reading & writing to all speeds/brands of 2gb SD cards...not any inherent problems with this Sandisk's USB interface.

If the devices you listed above cannot read 2GB SD card, then they need to have a way to upgrade their firmwares or drivers. Just like old 386 PC might not be able to detect IDE HDD that's more then 512MB, unless the PC has newer BIOS firmware you can flash.

I've had two of these things for about a year (not sure if it's been a year since they were introduced, but I got the first one pretty soon after that) and they've held up well. But there's a qualifier. I regard the card and its hinge as potentially very fragile and always handle it gently. I don't roughly or cavalierly fold it in half and risk going past the point where it's supposed to stop folding. I always "break" the two sections apart gently and with two hands, and I haven't had a problem yet. That said, I'm curious to know what SanDisk would do for me (yeah, right) if the thing did break. Could my data be recovered? I remember seeing something on the SanDisk site about how this thing is guaranteed to stay intact through a gazillion (or whatever) openings and closings. That sort of implies, though probably not legally, that if you bust it before you reach the magic number, SanDisk will help you out. And I'm adding speculation on top of speculation here, but I don't know if "helping you out" would consist of aid in data recovery or just "Here's another card to replace the one that busted."

I keep the card primarily in my Palm TX and routinely remove it and plug it into the computer at work and my computers (both Mac and PC) at home. I've also used it in my Panasonic camera with no problems. However, my laptop PC has a conventional SD slot and I won't put the card in there -- it's not necessarily so fragile that it wouldn't survive removal from the slot, but I don't want to take the chance, especially since I have the better option.

One final caveat is that this thing's USB connector won't reach some recessed USB ports. In such cases it's easy enough to use a short cable. Yes, I know -- if you're going to carry the card *and* a cable, you might as well just use a conventional flash drive.

Trust me, I've tried hitting every site (American & foreign) of all of the card/device manufacturers of the non-compliant hardware I have. Epson in particular refuses to release any updated firmware for their printers w/ card readers built in and, amazingly, won't even directly admit there's a problem. Gatewa is in the same boat. Canon sort of takes a "YMMV" stance on their miniDV camcorders' card capacity limitations. The rest (Mitsumi, Dazzle) couldn't be bothered as they are just reselling some Chinese firm's wares to begin with more likely than not.

Fact is, it costs these companies $ to support current, slightly old and EOL hardware. That's $ they don't want to spend. They alread HAVE our $ so why fret over it? Just fit it in next year's update and they can be assured a few poor suckers will fork over the $ to upgrade for a reason as piddyly as 2gb SD card compatability. Or you can be like me and warn everyone which companies/products to avoid like the plague. Just more fuel for the fire and yet another reason that the fully interoperable, converged world will always remain a bumpy path filled with headaches at BEST.

For the record, I've had excellent luck with Sandisk replacing a DOA 64mb SD card and a 128mb card that was toasted by my early production run T3 (pre-update) and very early 1gb card that didn't live up to its promises. Rule of thumb--all Sandisk cards in the "newer" style logo/packaging are much more reliable than the older variants.