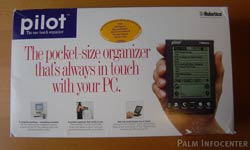 The worlds first widely successful PDA and the beginning of what would become many Palm OS handhelds, the Pilot 1000, has become a mobile technology icon. This was the device that rejuvenated the PDA industry and made the term 'Palm Pilot' a household name.

Originally released in March 1996, the Pilot 1000 debuted with 128k of memory and a monochrome black on green glass display. Read on for a look back at the Pilot 1000 with detailed images of the handheld, retail box and original packaging.

ah... the good ol' times...
wouldnt it be a nice time for palm to announce the new treos?

Where is the link to the PIC review?

I'm actually getting a Pilot on Wednesday.

Hi,
makes me nostalgic. But I don't understand the moves that followed:

IIIc without memory expansion
m505 with fuxated screen
m515 without bt or anything
Discontinuation of Palm.net
No Blackberry-Killer(altough the i705 could have been with its "push" email)

I originally owned a Casio "Zoomer" PDA, which faded to the background, overshadowed by the Apple Newton of the time. The Zoomer was looked at by Jeff Hawkins, and Graffiti was even released for it. Of course, when the USR Pilot 1000 was announced, I just ahd to have one, so I purchased one the week after its release. I have owned some form of PalmOS device ever since. (I'm currently contemplating a TX.)

Palm's simple design concept is what really made it shine. It wasn't bloated or loaded down, it was fast, and it did what it was meant to do. Oh, and battery life was measured in weeks back then, not hours. And in my opinion, the Palm V/Vx models, were the absolute best PDA design ever marketed.

m515 was the paradigm of PDAP design

Why?
It perfectly updated the classic Palm V IDEO formfactor design and brought the feature set closer to modern PDA levels. The m500 was actually more comfortable to hold in the hand due to a less "sharp" bottom flare than the V. It also weighed less as well.

-It lacked the 66mhz Dragonball CPU that some of the comparable Clies at the time used
-No backlit Graffiti area like the m505.
-The usual drawbacks of OS 4.x on Palm Inc. devices--no d-pad, no 320*320, no audio etc.

Had Palm released something like an m555 running OS5 with stereo sound & a 320*320 screen, it'd have been nearly perfect. Heck, even something released today with specs in the neighborhood of the TX or T|E2 in the same formfactor would be worth getting excited about.

Palm totally missed the boat styling wise a few years ago and has yet to recover. Anyone remember the nude woman + Palm V ads? The Treo design in comnparison resembles a chunky torse with three amputated limbs (the ungainly antenna protruding out of the top being the remaining tree stump leg).

Palm USED to have the V/m500 series, Handspring USED to have the Visor Edge. Sony HAD a couple of pretty stlish Clies. Now Apple has their iPods, Motorola has the PEBL, RAZR etc. There are any number of stylish LCD & Plasma televisions. B&O has always had stylish gear. Where's Palm current efforts that give even a second though to aesthetics? Remember, folks, style can always succeed over feature set if the price is kinda right and no major compromises are made (battery life, screen etc). The iPod Shuffle is the best testament to this philosophy...though the lack of an LCD on it can be considered an enormous drawback.

Yeah, the M515 hit the nail on the head. Similar but improved form factor, plus expansion slot and extra memory. To top it off, if you did not use the backlight (like you would use the V) it got similar battery life. Even with the backlight on, it did pretty good. I do think they came pretty close to their peak with the T3. With the exception of the battery life, the T3 is still one of my favorites because it is smaller than the V and still packs a lot of power and a big screen.

> Heck, even something released today with specs in the neighborhood of the TX or T|E2 in the same formfactor would be worth getting excited about.

I couldn't agree more. Since the 'Tungsten' brand has now been ditched, it's time that Palm takes a look at its designs again. I think that the m500 form factor would make a good starting point to work from. A new design would normally mean a reconfiguration of production lines (which would increase costs), but there may be good upside potential. The success of other lines of gizmos (eg, RAZR, iPod, etc) shows that there is a reasonable market for elegant design. The big question is: how much would a redesign add to the cost of a mid-range unit? A thin and light unit, with the specs of a TX or TE2, at an affordable price could be a knockout combination.

(No, 'Back to the Future' is not may favorite movie!).

I bought a 1000, later upgraded to a whole 1 meg memory! Then a IIIx, Vx, now a Treo 600 for about 2 years. (I think I left one out, though.)
A few weeks ago my now-Outlook sync auto-archived and of course it archived my old calendar appointments. Fortunately I also sync with my home desktop using the Palm Desk softwre so it restored all those old appointments.
This was the first real PDA in my company, although my boss at the time had a connection and later got a clear case for his--that was extra cool.
After almost 10 years with a PDA, I can't imagine doing without it. The 700p is in my sights next.

I think my first was a Palm Pilot. I remember 2 mb of RAM. My wife bought it for me for Christmas. I had been using a Sharp Wizard. Then I had a Palm IIIC. I believe there were a couple of Clies in there also. I now have a T3 for a couple of years. I have never had to reenter any data. I have only had 1 hard crash in 7 years. And that was years ago. One day I forgot it at home and I was lost. I didn't know what to do. The only real problem is that with all the good games the battery does not last long enough. I have thought about a Treo but I do not want to be without a phone because I was playing Sudoku too long.
Long live Palm and the Palm Os.

friend of mine has this palm pilot 1000 and it's with me for now, lol am trying to see if there is a way to change the language..it's currently in french.

is there any place to get the old software and connectors?

any help is greatly appreciated, thanks.
sb

im sorry i made a mistake

i posted previously about the one im trying to things for but its not the 1000 its palm pilot personal.

but still need to know if languge can change.