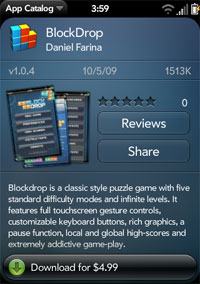 Updated: Palm Inc. has activated the commercial end of its third party software marketplace. Starting late this afternoon, some of the first official commercial webOS applications are now available for purchase from Palm's on-device App Catalog.

Some of the first paid apps to debut include:

Update: And as soon as they were up, they're down again. A critical security bug has cropped up with the new system (discovered by WebOS Internals). More details will be posted as they come in. Paid apps are back, so Palm seem to have found a solution to the problem. Details on the security hole are posted after the break.

you can thank Apple/iPhone/AppStore for these prices. without them these creeps would still be trying to charge 2x and 3x as much. competition is good!

Creeps? Interesting choice of words to use for software developers. What do you call politicians?

IMHO, some of these prices are too cheap for Pre apps. The iPhone has a huge user base that makes $2 apps profitable, but we might see higher prices across the board for the Pre once the initial honeymoon period is over. And really, $9 for a good game is still pretty decent value.
For when you'd rather be doing anything other than paperwork.
http://www.rypenow.com

they're not all creeps - only the ones that tried to gouge. and PalmOS had a pretty big user base - but yes, never fully and properly marketed apps to.

Subject says it all. About as friendly as you can get, really... besides allowing other stores.

Welcome news for developers tonight: Palm yesterday called a gathering of developers and journalists to officially introduce their new Developer Relations heads to the community, and made two big announcements to boot. Firstly, they've announced a new app distribution model that does away with any Big Brother review process. Developers can now upload their applications directly to Palm, who will then return a URL which can be used to access applications directly from the Pre - as simple as that.

The second piece of news is possibly even bigger: if developers choose to make their apps available as free open source, then distribution in the App Catalog will be completely free, with no strings attached. (Developers wishing to sell their apps will still be charged $99 annual fee for their account, and $50 per paid application in the catalog.) To cap it all off, every developer in the audience was given a free Pre and Touchstone with a month's free service from Sprint. "Just hack on it," were reportedly Ben Galbraith's words.

they have developers left? i thought they pissed them all off?

^^ heh. if they did, I imagine they're about to get a whole lotta them back...

RE: Palm Announces 'No Review' App Distribution, Free For Open So

This is a much smarter way to compete with Apple, rather than the itunes sync game Palm have been playing.

Don't know how many are going to come rushing back to the platform though...

I'd think Palm would be setting itself up by doing this. It'll take very little effort on the part of the Bad Guys to make Bad Exploiting Software even though almost all applications are wide-open source.

Unless Palm is saying their mini-review of each application really IS a maxi-review that'll become bogged down instantly.