palmOne has announced the Treo 600 smartphone is now available to Verizon Wireless customers along with a new release of Wireless Sync, Verizon Wireless always-on e-mail service powered by Intellisync. 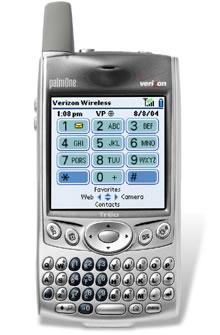 Verizon Wireless is the only carrier to offer an integrated e-mail solution on the Treo 600 smartphone so that e-mails sent to a customers PC will be immediately sent to their Treo 600. Wireless Sync offers constant synchronization of customers e-mail, calendar, contact list, tasks and more. Wireless Sync for the Treo 600 is an upgrade to Verizon Wireless previous version and includes always-on functionality, inbox synchronization and the integration of up to three additional POP3 or IMAP e-mail accounts. The service is compatible with Microsoft Outlook and Lotus Notes.

The Treo 600 is an ideal device for business executives, seamlessly combining a full-featured mobile phone and a Palm OS® organizer with wireless data applications in one compact, powerful device. While the Treo 600 is as small as a wireless phone, weighing just 6.2 ounces, the phone/PDA hybrid boasts a full QWERTY keyboard and five-way navigation button. The Treo 600 enables users to read and send e-mail and also has an integrated camera. With separately purchased software or accessories, the Treo 600 becomes an MP3 or video player. The device can be used with NationalAccess, Verizon Wireless high-speed Internet service with average data transmission speeds between 60 and 80 kilobits per second (Kbps) with bursts up to 144 Kbps.

The premier smartphone in the industry is now available on the largest network in the United States, said Ed Colligan, palmOne president. The feature set of the Treo 600 is perfect for todays mobile work force where communication and productivity are key.

Verizon Plans
Treo 600 customers may select from a number of Verizon Wireless voice and data plans that begin at $24.99 for 5MB of data allowance when added to an Americas Choice plan of $35 or higher. Wireless Sync is included with every NationalAccess PDA/Smartphone data plan. The Treo 600 is available for $449 with a two-year customer agreement.

Some of the reasons behind Verizon's delay is...

vesther @ 7/19/2004 8:03:07 AM #
....with the Wireless Sync in mind, plus other features that Verizon wanted implemented with the Treo 600. The contract discount prices only apply to new accounts, but don't expect to waive the activation fee with these phones, though.

On other Treo news, Nextel is the only major carrier left out on the cold.

I see at Verizon's site that there are optional data plans listed with the Treo. Does that mean that with a Verizon Treo I could not dial into my Earthlink account to check mail like I currently unless I subscribe to the data plan?

This is Verizon's lower speed IP service and will probably be a lot more pleasant and cheaper than what you're using now.

One question: are minutes connected through #777 billed as just minutes off my plan?

At one time you could get "auto-provisioning" where NA minutes would just deduct as usual, but I don't know what the status of that is now. I still have it but I'm not sure if you could get it now or with a Treo.

vesther @ 7/24/2004 11:06:06 AM #
I need to point out a major discrepancy for those who are looking for CDMA Treos that the Verizon Wireless Version of the Treo will only allow memory usage up wo 21MB because Verizon, during the approval process, wanted PalmOne to "block" 11MB for the system to use. Does that ring a bell?