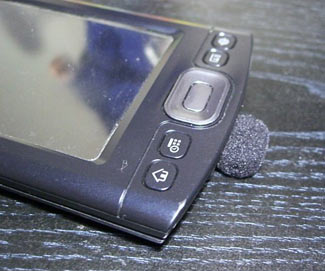 Fall 2006 has come and gone with no sign of any new Palm handhelds on the horizon. With even more urgency than before, the PDA faithful are stockpiling devices and accessories and preparing the inevitable. The TX leads the field as Palms flagship handheld and is still readily available worldwide. Yet any long-term Palm user will recognize that one of the TXs major shortcomings is its lack of an internal microphone.

Once again, Tech Center Labs have produced a superb quality external microphone for Palms TX. After such a positive experience with Tech Center Labs earlier TX microphone, I was excited to learn that the older units major shortcoming had been addressed with a tiny, bud-style new mic design.

In the Box
I received a poly bagged evaluation unit in an envelope. Since there was no documentation or packaging whatsoever I will not comment on this aspect of the product.

Initial Impressions
Unfortunately, my initial impressions with this microphone were that it does not appear as solid as its older brethren. The entire bud mic is encased in a thin wrap of foam. This is the same kind and quality used to line cheap Radio Shack microphones and dimestore headphones. After carrying my TX around for a few days with the microphone attached, the foam began to tear and sag in several spots. Pulling the foam enclosure aside reveals the delicate innards of the microphone underneath.

When viewed at arms length it appears that my TX has sprouted a tiny fro from its Multi Connector area! 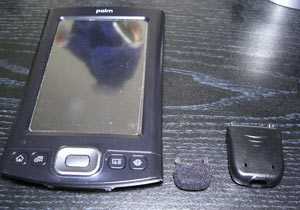 I was worried that this redesigned smaller microphone would be wobbly and less secure than the previous TCL microphone. This time, fortunately, my fears were quelled as the tiny bud mic is still so securely attached that I could wave my TX around by grasping the mic (not a recommended maneuver by yours truly)!

Just as before, I used the freeware SoundRec application for all of my microphone testing. I used the TX + bud microphone for two full work days. My usage of the TX was exactly the same as it was for the previous test. I recorded shopping lists, phone numbers, drunken ramblings at a party and whatever else came my way. Informal testing against my Treo 700p and its bundled Voice Recorder app, proved the TCL mic to have slightly less sensitivity but less background noise than the internal Treo microphone. This new mic also had a bit less background noise than the older TCL microphone. I would assume this to be a side effect of the new design. Audio quality was, as before, crystal clear and superb in nearly every environment save for a very noisy restaurant or in a moving car with the sunroof open. Ill even wager that despite the reduced dimensions, this smaller design is actually a better performing microphone than the older design. I am sure the exposed design of the bud mic makes this possiblewhich leads me to back to my original cause for worry.

Compatibility and Availability
Tech Center Labs only tests and guarantees this products compatability with the Palm TX, their development platform of choice. However, the microphone should work any Multi Connector-enabled Palm handheld device such as the T5, E2, and of course the TX. I tested the mic on my Treo 700p and found that the external bud mic does NOT override the Treos internal microphone. In e-mail exchanges with TCL we have speculated that the pins of the Multi Connector standard dedicated to microphone input may be omitted or bypassed on the Treos. It would be interesting to test this mic on a LifeDrive since it is the only non-Treo device sold by Palm that also offers the Multi Connector port.

Tech Center Labs sells a wide variety of Palm microphone and charging devices directly on their web store. The bud mic retails for $24.95 plus shipping. TCL provides and maintains a handy list of links to freeware VOIP, voice command and sound recording applications. 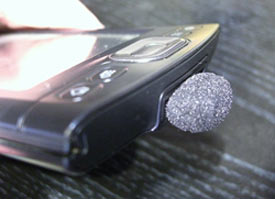 I encounter no ill effects from using my TX in other apps with the microphone plugged in. As before, it requires no driver installation and is a plugn play device in every sense of the term.

Conclusion
My only complaint with this unit is quite a major one. The potential damage that could result from a naked TX being slipped in and out of a pocket with the bud mic attached is unpleasant to contemplate. Tech Center Labs is no stranger to working outside the box for new solutions and, should a reasonable market still exist for products of this nature in the future, will likely address this concern in the 3rd generation product. TCL continues to go where Palms bean counters fear to tread. If the coming months are indeed the swansong of the conventional PDA, then at least Tech Center Labs has given TX owners a final gift of audio capture.

... coulda gotten 4.5 outta 5 with this profile instead:
http://www.churchoflivingfaith.com/images/txmic.jpg

The things that they are fixing because of Palm's refusal to try to win, are actually quite impressive. This whole thing is bittersweet ... "Great accessories to improve Palm PDAs, yet Palm is so pathetic that they cripple there devices into mediocrity".

I love my T|3. No need for a T|X and the silly microphone add-ons.

... coulda gotten 4.5 outta 5 with this profile instead:
http://www.churchoflivingfaith.com/images/txmic.jpg

I like that! has room for the mic, vibes, silent alarm and laser pointer. If they give us another Palm with the same case design and missing all these gadgets I'd be tempted to go through the expense of having something like that molded.

Gary, you're a hero anyway in my book. This article just reminds me to shake my head and wonder why I ever became addicted to Palm OS, when the bean counters are driving it into the earth. I hope for all our sakes, that you'll not have to do that. Hopefully you can use your expertise of additions that make a Palm PDA better, rather than being saddled with the task of getting their devices somewhere near par.

Kris is correct, the foam cover could be damaged by leaving the mic attached when shoving the TX into your pocket. I keep my TX in a SENA case and the mic in my shirt pocket, it only takes a second to attach it when I need to record something. I also include a spare foam cover with each mic. They are the same covers you use on ear buds so they can easily be replaced when they become worn. The foam has the advantage of reducing background and wind noise.

Do they make Buggy Whips too?

Gary enjoys the sort of rugged, back-to-Earth pioneerism and rural living that Beersy can only dream of!

Congratulations on a job well done renovating your "bunker" and enjoying what must be a wonderful way of life!

Thanks guys! It's been a culture shock but in a good way. A few years back my big concern was 'does the Ferrari or Countach need to be waxed again?' Now its 'what's that stuff leaking out of the Pickup?' and 'why aren't those chickens laying?'
But I still really enjoy electronics and am looking forward to the next Palm PDA, I don't think they are ready to quit yet and I think the smart phone competition will push them back where they started.
Gary

A 'new' Case for this tiny mike

When Gary shipped me my unit (yeah, he pretty much does everything there....chief bottle washer, etc.) I asked about a 'case' for the unit. I wouldn't consider keeping it attached to my T|X since I don't need it all the time, just once in a while.

The solution was an empty SD card case. I suspect that a CF case would work just as well.

The benefit to the attachable mike on the T|X over the T|3, which I thought was just about the perfect PDA was that I constantly accidentally turned on my T|3 with the voicerecorder switch.

I know there was software out there to fix that, but I was never satisfied with the other 'effects' of that software.

The price of the Bud-Mic is reduced for the Holidays and for just Palm Infocenter readers I have added a secret way to order and not be charged for shipping. Instead of clicking on 'add to cart' click on the little string of Christmas lights below the 'add to cart'