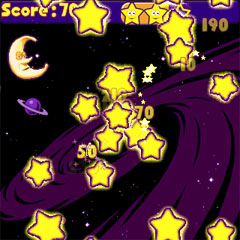 Astrawares new title StarPop! is less of an actual game than an electronic diversionand an addictive one at that! Theres no one better suited to give fascinating insight into the games creation and development other than the man himself, Astraware founder, CEO and the mind behind StarPop, Howard Tomlinson.

Gameplay & Options
The goal of the game, quite simply, is to pop stuff with repeated stylus taps. Balloons, fruit, stars, and hearts are all fodder for your stylus tip. Each stage is comprised of a two segments; a rotating and bouncing phase (think Asteroids meets the old Astraware shooting gallery games) followed by a straightforward downward falling, item popping round. Its simply not possible to lose a game in the conventional sense. Instead, one gameplay session concludes and another begins, with the only goal being to beat the previous score.

A high score table has fortunately been included within the game. Astrware has seen fit to include unlockable bonus characters and novelties to extend the replay value, though these might be more interesting to small children than adult gamers.

The levels of StarPop are represented as different planets on the games transition screens. These various worlds range from the interior of a house to the depths of candy-colored psychedelia. A rocket ship carries the player from planet to planet. This all makes no sense whatsoever but its splendid fantasy and perfectly appropriate for the games mood.

StarPop is a single player-only affair. However, dont be surprised if a spouse/child/coworker/friend wrestles your Palm out of your hands and begins playing out of sheer curiosity. Only twice have I ever been asked, What ARE you doing when playing a mobile game; the first was when I was wincing and furiously tapping and dragging my stylus during a heated Warfare Inc. game. The other was during a quick mid-afternoon StarPop game at work. For StarPop to be as engrossing as one of the deepest and most complex titles written for the Palm OS is a testament to the simple but addictive nature of its concept. 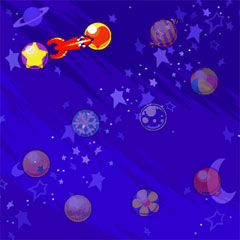 Without a doubt, Starpop can be referred to as an eye AND ear popping title. With plenty of bright primary colors channels and first-class console-quality music and sound effects, Astraware has produced a Palm OS tour-de-force. Comparisons with the classic SNES-era Kirby and the Mario/Yoshi games sprang to my mind, what with the cartoon-like graphics and richly colored, surrealistic backdrops. Effects animation levels are adjustable depending on the capabilities of a particular Palm device. I noticed a very slight bit of sluggishness on my TX with all effects maximized but my Treo 700p was fine, likely due to its more generous heap memory.

If Starpop rates a 9 for its graphics, it deserves a solid 8 rating in the sound department. StarPop opens to a nice poppy tune on the main title screen that continues throughout the game I honestly barely noticed the music as I was too busy popping everything in sight but some additional tunes wouldve been nice for varietys sake. The sound effects are of suitably high quality and appropriately varied in their popping effects.

Controls & Misc
StarPop is entirely stylus-driven. In my transition from a conventional PDA (Palm TX) to a Treo 700p Ive noticed my stylus doesnt get used nearly as often as it did before. StarPop puts the touch screen to fantastic use with a game that simply could not be replicated on any other common platform save the Nintendo DS. 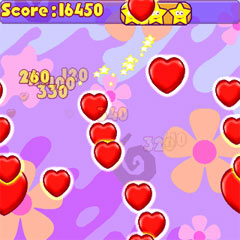 The game occupies 974k and is split between the 940k game prc and a small music file. StarPop supports all OS 5+ Palm devices and all native OS 5 resolutions. Do note that the T|T and T2 cannot play the game in 320 x 320 mode and that the Zire 21 and several Chinese Palm-based smartphones cannot play the game.

I had no issues launching the game off of an SD card in my TX or 700p though I did notice that the game takes a bit longer to load and uncompress its files than most other Palm OS games.

Conclusion
Overall Starpop is a very nice diversion for gamers and non-gamers alike. The fantastic audiovisuals and addictive play control on StarPop can serve as a model to other game developers.

The only area where this title can be faulted is in terms of its pricing and limited replayability for the hardcore gamer. The suggested MSRP of $19.99 might be a bit high for the casual gamer; however being able to occupy both parent and child can be priceless to some parents! Viewed in this light, the price is quite agreeable and offers better value and quality than is expected of a lightweight title such as this. If Astraware continues to make continued advances beyond their standard puzzle with innovative titles such as StarPop, the Palm OS gaming world will flourish and set inimitable standards in the process.

I'm not a big gamer, but where the F is Zap 3000? IMO - Zap was BY FAR the best game ever created for the PalmOS and Astraware let it rot rather than capitalize on its success. How about a new Zap (Zap 3000) with 480x320, enhanced graphics/sounds, new levels, etc.? Why let this franchise die?

Astraware have been putting most of their efforts into a new set of cross-platform dev tools - but good to see their first original release in a while (presumably built using afore mentioned tools).

Perhaps they already have plans for a new title in the Zap series - would sure be a welcome game in my book - as there are far too few shoot 'em ups on Palm OS (and far too many Bubblet/Bubble-Pop type games).

Yes, I am also expecting Zap 3000 from Astraware. It looks like it's going to become a vaporware.

Is it just me? But I think most of their games are very similar in game play, but just different graphics.