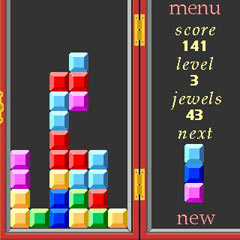 Overview & History
During the 16-bit console wars of the early 90s, Segas answer to Nintendos Tetris juggernaut was a game called Columns. While it essentially mimicked the basic premise of Tetris, Columns did provide a few unique twists. Instead of focusing on rotating geometric shapes, Columns dealt with arranging multi-colored jewels into matching patterns. The color screen of Segas Game Gear portable console made this color-centric gameplay possible, whereas the Gameboys monochrome LCD was better suited to the gameplay of Tetris. While Columns was mostly ignored by the critics as one of dozens of Tetris-inspired kockoffs, the game developed something of a cult following. While I still prefer Tetris, Columns more relaxed gameplay and multiple gem arrangements belie its appearance as a Tetris knockoff. I actually continued to play the game on my old Genesis and in various emulator forms through the 90s up until recently.

Beiks quietly released a near-perfect clone of Columns in 2001 for Palm OS devices. The game was totally redone in 2003 but is unfortunately overdue for another remake. I was thrilled to see the 2003 update released and immediately purchased it for my Tungsten T. I have kept, and played, Jewels on every Palm OS device Ive owned ever since.

Modern Palm OS Device Issues
A minor 2007 update to bring the game in line with the remapped hard button layout and give an in-game exit function would be fantastic. Unfortunately, this looks like another unfortunate case of abandonware by the developer. The most annoying part of the game is that the home button on my Treo 700p is mapped to piece movement within the game. I have to either reset my Treo or tap the voice recorder button on the side of the Treo to exit the game (since that button launches CallRec).

Even in 2003, Beiks had the foresight to include an in-game instructional help screen and remappable controls, even if 5-way navigator support was completely overlooked. Jewels occupies a meager 89k of device memory and runs flawlessly off of an SD card. 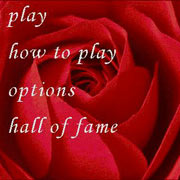 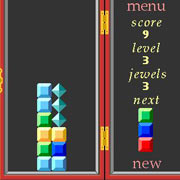 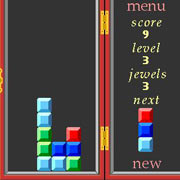 A version update to this great port would bring it to a near-perfect score. Despite these minor annoyances, Jewels is mostly usable in its version 2.0 iteration and is the best way to enjoy classic Columns on a Palm OS device short of actually emulating the original Sega version.

I always liked Columns, especially the Game Gear version. What I didn't like so much was when the Game Gear's batteries gave out in the middle of a game...

Ah, Sega. I miss them. The Microsoft vs. Sony console war doesn't have anywhere near the fun of the Sega vs. Nintendo battle. Back then it was about the games, not the machines...