With the ever-widening waistlines and bottoms of the American populace, dieting and exercise are popular New Years resolutions. While yours truly is not yet in mortal danger, I had a more sedentary than usual 2006 due to a variety of factors (mostly family and work related). I made a vow to inaugurate 2007 by monitoring my caloric intake and eating more healthily while slowly transitioning into more regular exercise. Enter the CalorieKing software for Palm OS.

Overview
CalorieKing for Palm OS is just one tool amongst an impressive lineup of nutritional, exercise, diabetic, and food-related books, software programs and even pedometers offered by the Calorie King division of the Family Health Network. 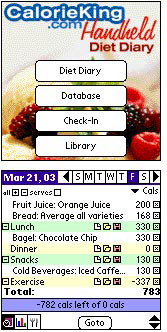 CalorieKing is a weight los company founded by Allan Borushek, a dietitian, health educator, and author with over thirty years experience in the field. Borushek is best known for his best-selling book, The Calorie King Calorie, Fat & Carbohydrate Counter. The book is featured regularly amongst the best-seller lists of both USA Today and Amazon.com. With over ten million books sold over the years, Allen Borushek is widely acknowledged as the "Calorie King", thus the name for his company.

CalorieKing now has a line of diet and exercise management software for Mac and Windows in addition to the Palm OS and Pocket PC mobile platforms. The CalorieKing Nutrition and Diet Manager is their most popular software app and their Palm OS version is the focus of my review here.

CalorieKing Nutrition and Diet Managers frequently updated food database contains over 50,000 foods and beverages. Fully integrated with the database is an easy-to-use diary for recording your daily food intake and exercise regimen as well as a powerful personal profile, which calculates an individual's recommended calorie budget (their term, not mine!), tuned for healthy, sustainable weight control.

Testing Methodology and Initial Results
CalorieKing requires a Palm OS device running OS 3.5 or newer with at least 8mb of free memory. The CalorieKing website lists 4.2.1 as the newest version of the app but my download of the executable installer actually loaded version 4.2.2 to my Treo.

I installed the program to my SD card in my 700p, thinking the huge food item database was going to be much, much larger. The entire app occupies only 361kb of space. The handy CKTools app is just an additional 55k and is well worth installing.

I actually installed the program on my Treo several months ago in 2006. Unfortunately, due to a variety of factors related to work and personal life, I was unable to make a concerted effort to diet or evaluate the app at the time. Knowing I wouldnt be able to give the program the proper attention it deserved, I conveniently waited until all of the spoils of the holidays had been consumed. Then, on January 1st, I commenced my actual testing & dieting period. I also purged my pantry of unhealthy snacks and rejoined the local gym a few days later. Things were already looking upuntil I got the eye-opening experience of adding up the snacks and treats one imbibes during the course of a dreary winter workday!

As of January 24th, while I have managed to lose only three to four pounds, I am much more in tune with my eating habitsparticularly, just HOW unhealthy certain restaurant meals can be! As a perfect example of a lesson learned as I entered my second week with the program, CalorieKing made me aware of the folly of having a healthy workday lunch (plenty of fresh greens, some grilled chicken or seafood and no carb-heavy starches) that was foolishly followed by a mid-afternoon Grande Starbucks Peppermint Mocha! 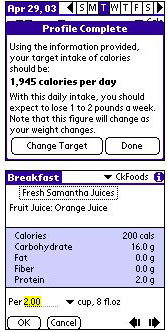 Im impressed by the depth and capabilities of the CalorieKing software. Its definitely capable of making a huge difference in ones lifestyle. Even before the pounds start falling off from reduced intake and greater levels of exercise, a few days of diligently logging all of the snacks and sodas are certain to raise an eyebrows when the calories, carbs, and grams of fat are all accounted for! That said, I am inclined to recommend CalorieKing for its inherent health-related benefits and the data it presents rather than its technical merits as a cutting-edge piece of software.

Technical Shortcomings
While the CalorieKing software has definitely benefited from the tireless efforts of the companys health educators and nutritionists, it has some definite shortcomings and limitations when used side-by-side with modern Palm OS application.

Graphically, the programs About screen clearly shows its age with a dithered, 8-bit color backdrop and a copyright date of 2002. In addition, the iconic aspects of the UI are quite crude and sometimes ambiguous in meaning. Sometimes Id have to spend several minutes flipping through dialog boxes, drop down menus, and tabbed icons before finding the screen I was searching for.

Id love to a see an overhauled version 5.0 of the program designed around the ubiquitous wireless capabilities of nearly all modern Palm OS devices. In addition, the food database could be greatly expanded and the included tools enhanced to take advantage of the near-infinite storage capacities afforded by SD card capacities. Id personally like to see some kind of included exercise coach, with actual pictorial guides to stretching and various types of activities. Native wireless integration would also be a fantastic addition, as would 5-way navigation support.

Nonetheless, CalorieKing is going to be my constant companion through 2007 as I slowly but surely make inroads on keeping my caloric intake under control and continue monitoring my activity levels in the programs diaryalways an important thing for a desk jockey like myself!

The fine folks at Calorie King are promising an updated version of the program sometime this year. Ill be eagerly awaiting its release as this very deserving app is really in need of, ahem, a new set of shorts and running shoes to improve its overall appearance.

CalorieKing is available now from the publishers website for $29.95. An upgrade version for owners of version 3 is available for $4.95. A free trial is available and CalorKing offers a nifty free health tool bundle for download on their website.

There isn't a lot of reviews online of these type of programs. What made you decide to use CalorieKing over some other program?

Reviews of similar types of software

Quite honestly, nothing other than the fact that CalorieKing's PR person kindly asked us to do a review of it.

For the record, I don't usually review "these kinds" of apps (lifestyle type programs), preferring to leave that sort of stuff to real-world influences (Doctor, wife, people at the gym etc) but I thought it might make for an interesting change of pace for a review.

TreoCentral reviewed CalorieKing a while back, as did PalmAddicta. One of the PA associate writers also did some other diet and exercise-type software reviews that you might want to look into.

I'll definitely keep using CaorieKing for the forseeable future. Of course I'll definitely post any impressions of the new version of CK whenever it's released.

I can assure you that the vast majority of the reviews here at PIC will continue to be the usual hardware, games, apps, media players etc.

I tried several other products and found that I liked Calorie King (CK) best. The amount of pre-entered items (both grocery items and restaurant) was great and relatively well organized and that is huge for me. The ability to enter my own items right alongside the pre-entered items is great. Being able to save whole menus is cool. Integrating exercise with my food intake completes the picture.

The program is very stable. Only occasionally crashing when searching the large database stored on my SD card. Ease of navigation is better with CK than any other thing I tried.

But my favorite things are being able to see so many types of real time reports and charts. Tracking my progress became a huge motivator for me. I am a visual guy so seeing the chart trending down or leveling out (or going up God forbid) helped me in my weight loss and helps with maintenance.

I've used CK for over a year now. I lost 50 pounds in sixth months and kept it off. Bet 40 dollars I ever spent!

CK's database is nearly twice the size of any other competing programs. Sure the interface is a little clunky, but what your really buying is the database. They update (add to) the database of restaurant menu items almost every week. This is by far the best nutrition program available for the Palm OS.

> ...The program is very stable. Only occasionally crashing when
> searching the large database stored on my SD card...

Even though I've seen this type of comment over and over again for decades, I'm STILL aghast at the thought they we've grown so accustomed to bad software that "only occasional" crashes are considered a sign of very stable software.

There is something intrinsically wrong with this way of thinking (*).

Pointers into the nether being used uninitialized? Memory leaks? Data stores too small to hold what they're going to hold? No problem! Will only cause occasional crashes!

I hope it gets fixed in my lifetime.

I've been using CK for months. It's got much more serious problems than mentioned so far.

On the other hand, they also have desktop software for Macintosh and PC, a website, and handheld software for PocketPC as well as Palm. But none of them talk to each other. I have no way to print out the data that I enter in my Palm, and I have no way to share that data with another CK program on my desktop or on the web, so that I can print it out that way. This makes it much less useful to me when I go in to see my nutritionist.

In addition, they force you to do a "net calorie" method with your food intake and exercise. My nutritionist wants me to track these things separately. It's hard for me to tell if I've had too many calories or not enough, if I'm having to do the math in my head to remove whatever I've expended in terms of my workout. Doing a "net calorie" method may be preferred for some people, but not for me. There needs to be an option for tracking them separately.

I'd like to see a way to treat the "My Foods" stuff exactly the same as the official database, being searchable, etc.... You never know when you are going to run across some new item from a company who has lots of other items already in the database. But once you've manually entered all the relevant information, you shouldn't have to worry about where the information came from or where to find it again. If you have lots of foods that you've created in the "My Foods" section, this becomes a royal pain.

Same problem for "My Exercises" as they do for "My Foods".

I can deal with the UI issues, but I shouldn't have to.

RE: More serious problems than mentioned so far...

This is my impression too. It seems close, but not close enough. The fact the desktop programs don't sync with the Palm version is a huge miss.