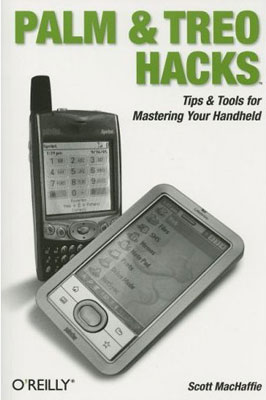 Nipping at the heels of McGraw Hill/Osborne Press How to Do Everything series of Palm books is a new contender from OReilly & author Scott MacHaffie entitled Palm & Treo Hacks.

I was pleasantly surprised to see this little book on the shelf of my local Borders a few months ago. Despite the book bearing an October 2005 copyright date, I never even knew of its existence until I stumbled across it sitting right next to a similar book entitled PSP Hacks. I immediately purchased this book, as I was curious to see if this new entry into the Palm OS handbook field was going to be the eventual successor to the HtDE series. Do note that my initial reading of this book came prior to finding the release of a sixth volume of the HtDE series was imminent. After completing my HtDE review back in December, I re-read Palm & Treo Hacks with renewed enthusiasm so that I could contrast the two volumes. This is not a head-to-head review but I will reference my previous book review here for comparison purposes.

Keep on reading on to see just how much hacking how-to is contained within this inconspicuous little book.

History
Palm & Treo Hacks is the first and, so far, only volume in the series. Its author, Scott MacHaffie, is a programmer (as stated in the opening credits) and does not appear to have authored any other books prior to this one.

Target Audience and Content Relevancy
Palm & Treo Hacks is a similar, yet entirely different animal than the How to Do Everything book reviewed previously. Both are, as stated in my earlier review, essentially very detailed instruction manuals with a dose of advanced how-to instructions included in the later chapters. Yet upon finishing page 1 of P&TH the reader is left with no doubts that MacHaffie and OReilly are assuming the purchaser of the book is already a fairly seasoned Palm OS veteran. P&TH has a sense of urgency and immediacy throughout as it covers a huge breadth and variety of topics in a scant 216 pages vs. the 466 pages of HtDEs sixth volume. For example, the overview of Palms handheld lineup, the breath of the bundled PIM functions and the basic mechanics of the Palm OS UI are disregarded entirely with so that the book can go about its business without wasting valuable page space. As a veteran Palm OS user, I appreciated this lack of fluff and redundancy but I could imagine novice users immediately put off by this approach.

Chapter Organization and Content Highlights
On a basic level, P&TH does follow a similar pattern as the HtDE series. The opening chapter deals with maximizing the inherent functionality of the bundled PIM applications. This chapter (and, on a whole, the entire book) could be especially valuable to even veteran Palm OS users who might be upgrading to a recent OS 5.4.x device from an OS5 or earlier machine. Another potential target audience for this book could be someone who cut their teeth on Palm OS machines but jumped ship to Windows Mobile/Pocket PC for a few years before returning to the comfort food that is the Palm OS pudding.

Of course, feature sets will vary from one device to another so certain actions such as adding thumbnail images to contacts, are not applicable on some devices. As an example of the no-nonsense approach taken by this book, instead of a sidebar listing of which Palm devices support adding photos to Contacts (Zire 72, 31, and newer devices) the text simply reads, You need to have a memory card installed on your Palm device and your Palm needs to support this feature. No mention whatsoever that this is not a downloadable or user-selectable feature that can only be achieved by purchasing a new Palm. In this regard, Dave Johnson and Rick Broida do a much better job of explaining the precise dos and donts inherent in particular Palm devices.

One particularly strong area of the P&TH book is its coverage of games. Especially notable is a section on programs to help Dungeons & Dragons Dungeon Masters, Shadowrun fans and similar. Also, while I applaud the author for mentioning that the official downloadable Palm OS port of SimCity doesnt run on OS5 devices, the book fails to mention that there IS a version of SimCity that is compatible on earlier Palm OS 5 devices. This just happens to be the version included on the MDM Game Essentials MultiMedia Card. Strangely enough, the section on retro gaming mentions MDMs own Atari Retro games card.

Writing Style and Language: While this book is not going to win any awards for literary excellence, the language used within is presented in a clear, straightforward and easily understandable manner. Its not nearly as friendly as the juvenile banter between Johnson and Broida but this economy of words certainly helps keep the page count to a minimum. For the most part the book is very well written and conveys exactly what is necessary with a minimum of fluff or filler.

Aesthetic Attributes and Readability
The physical book itself is a nicely bound, oversized paperback. The font used is clearly legible and the paper quality is suitably heavy. My biggest gripepossibly the books biggest shortcoming overallis its absolute primitiveness in terms of graphic design, aesthetics and imagery. The books monochromatic austerity belies its whopping $24.95 MSRP (what I paid for it at Borders). The cover is a nauseating grey, white and green affair, with the oddly juxtaposed Sprint Treo 600 next to a LifeDrive. The smattering of actual product photographs, displayed in the books final chapter on hardware, are dark and murky. To add final insult to injury, the Comfort Stylus fingertip stylus shown in the photograph is being used with a Dell Axim instead of a Palm OS device!

Fortunately, the numerous screenshots depicted within the book are clear and small icons depict tips, suggestions and cautionary notes. In addition, a cute thermometer icon indicates whether a hack (to use the term loosely) is for beginners, advanced users, or experts.

Shortcomings and Overlooked Information
Actual criticisms of the book as far as incorrect information are quite few and far between. The book generally does a fine job of covering a wide variety of interesting topics, often ones that are highly specialized or niche areas. P&TH always gives helpful URLs and a number of screenshots. Tantalizingly strong segments, such as installing a Linux distro onto a Palm device, could have an entire chapter devoted to them. Yet after reading the book cover to cover, highlights such as the Linux and classic gaming/ROM emulation segments are followed by sections distressingly empty, such as the lack of Graffiti 1 replacement suggestions.

On that note, perhaps the most commonly performed hack in recent Palm OS history is inexplicably unaccounted for. The relative ease with which the Tungsten Ts classic Graffiti libraries could be loaded onto newer OS 5.2+ devices is commonly found online. Yet P&TH doesnt even make the slightest that there is a Graffiti 2 replacement available of dubious legality (the hacked G1 files) or a mediocre legal solution (TealScript). Does OReilly fear legal intervention by Palm and Xerox? Then why attach a hack title to a book if youre afraid of stepping into legal hotwater?

In a bizarre twist, the section of Bluetooth dial-up-networking is a very mixed bad. A tremendous amount of coverage is given to the infamous Shadowmite hack. Originating with a clever TreoCentral member, this hack restored the Treo 650s DUN capabilities that Palm had disabled at the behest of the carriers. Yet a similar subject, concerning pairing a Palm handhelds to cellular handsets via Bluetooth phone for dial-up-networking, is completely glossed over. No mention is made of the LifeDrives crippling inability to work with CDMA handsets either. I assume the bulk of this books text was written prior to the LifeDrives release and its image was just hastily added to the books cover artwork.

Of course, all of the content found in any of these Palm OS print guides can be found freely online. Its just nice to sometimes have them all in one neatly-bound volume. That said, Palm & Treo Hacks covers things not found in the How to Do Everything series but there are many areas in HtDE not even touched upon in this book.

By virtue of having content nearly one year newer, HtDE references recent bits of tech such as 3rd party MultiConnector cradles, A2DP audio solutions such as Bluetooth wireless headphones and Softicks Audio Gateway software. These various tidbits are unfortunately nowhere to be found in the older P&TH. Yet in its favor P&TH exclusively features a number of detailed, potentially valuable how-to guides such as Palm disassembly, charge contact repair, and battery replacement. A completionist newbie, if there indeed exists such a manner of user, would be well served to own a copy of each book!

Interestingly enough, both P&TH and HtDE conclude with a section on Palm-related hardware such as replacement styli and full-size keyboards. While neither book can hope to be an exhaustive accessory and peripheral overview, the nod in this department goes to P&TH due to its potentially invaluable pictorial coverage of battery replacement and worn contact repair.

Unsurprisingly, the unapologetic, brutally honest coverage and discussion found in PalmInfocenter is shunned in the books recommended URLs. Brighthand, the Gadgeteer, PalmGear et al. are all accounted for.

Conclusion
If I could combine the best bits of How to Do Everything and Palm & Treo Hacks, Id have something approaching the perfect Palm OS printed bible. Unfortunately, Im not a one-man publishing house so Im forced to rank each book on its relative merits.

I really am having trouble figuring out exactly what target audience is being targeted by OReilly and MacHaffie here. Ceding the introductory market to the long-running HtDE series and acting as a niche guide to Palm OS power users would seemingly be the best course of action for a second volume in this series. Unfortunately, with the downsizing of the Palm OS market, publishers like OReilly are forced to try and target as many types of users as possible with a single volume. This is no fault of Scott MacHaffie as he does a usually admirable job within the limitations of the book.

I simply cannot call this book a must have for either novice or expert Palm OS users. It has its high spots in places and is certainly of some value to many users, but the $25 price tag is very hard to stomach. Most of the Palm OS users who are active online wont see the need for a printed guide of any sort. The fact that OReilly tries to target hackers with a mass market, high-priced book like this is highly suggestive of a publisher without a clear vision of the overall state of the Palm economy and its user base.

Palm & Treo Hacks is available with a suggested MSRP of $24.99 at www.oreilly.com

Kris, check the index. I'm pretty sure it's there.