Canalys's latest worldwide smart mobile device report says that global shipments of all smart mobile devices rose 30% year-on-year in Q4-06 for a total of 64 million smartphones shipped in 2006. Their market estimates show that Nokia, RIM, Motorola and Palm each held onto a place among the top five worldwide smart mobile device vendors in Q4 2006, but some positions changed. Nokia retained its lead, while RIM moved up a place into second, nudging ahead of Motorola. Palm remained in fourth, while Sony Ericsson broke into fifth place for the first time since Q2 2004, thanks largely to shipments of FOMA devices in Japan. Its EMEA smart phone shipments were also considerably higher than in previous quarters thanks to the arrival of new models.

Year-on-year market growth for all smart mobile devices combined shifted down to 30%, compared to the 50% seen in Q3 2006, but unit volumes still hit a new quarterly peak of 22.1 million. Converged device shipments (smart phones and wireless handhelds) rose 42%, while unconnected handhelds posted their largest fall yet, down 41% compared to the same period one year ago.

Canalys estimates that Nokia shipped 11.1 million smart phones in the quarter, with its popular Symbian S60-based Nseries devices, particularly the N73, continuing to drive the volume. Despite increasing pressure from competitors in the mobile e-mail space, RIM performed well this quarter. A full quarters sales of its new Pearl smart phone, positioned as a more consumer-oriented e-mail device than its other models, helped it increase overall device shipments by 54% year-on-year. RIM retained its position as the leading smart mobile device vendor in North America, ahead of Palm for the second quarter running. Although Palm had new smart phones on both the Windows Mobile and Garnet OS platforms in EMEA and the Asia-Pacific region, its usually strong, consumer-led Q4 was impeded by a fall of 45% in worldwide shipments of handhelds, in line with market trends. 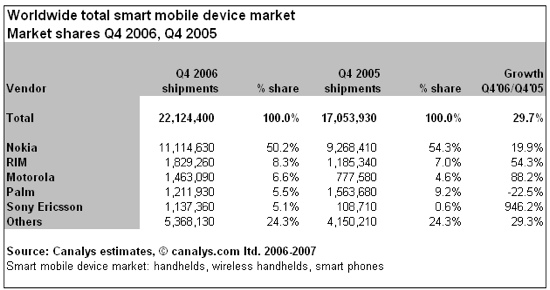 Canalys estimates that Linux devices represented more than 90% of the 1.5 million smart phones shipped by Motorola in Q4 2006. Meanwhile almost three-quarters of both Palms and RIMs shipments are in North America. Overall market leader Nokia, however, still ships more than half of its smart phones in EMEA, with Asia-Pacific also accounting for over 40% and North America being its weakest area by far.

Japan remains a unique market. Sony Ericsson performed well there in Q4 against the strong, local Symbian-based vendors, namely Fujitsu, Mitsubishi and Sharp. RIM and HTC have also entered this challenging territory, but are yet to see significant volumes Lashford says.

Sony Ericssons increased shipments were not solely down to Japan though, as it has extended its smart phone range again with the W950. Having both Walkman-branded and keyboard-based devices means it can target a variety of end-user types. But it will need to continue renewing and expanding its portfolio and ensure that the propositions of each model remain clear if it wants to stay in the top five during 2007, Lashford added.

Canalys estimates that global smart phone shipments for the full year reached 64.1 million units, up from 39.4 million in 2005, equating to annual growth of 63%. Wireless handheld shipments in 2006 rose 44% from 5.3 million in 2005 to 7.5 million, overtaking their unconnected handheld predecessors. Shipments of the latter fell 33% to 5.6 million units.

In operating system terms, for the full year, Canalys estimates that Symbian had 67% share, up from 63% in 2005, Microsoft was in second with a slightly reduced 14% share, RIM came in third on 7% followed by Linux on 6% and ACCESS/PalmSource with the Garnet OS on 5%.

In 2007 Canalys expects that activity around Mobile Linux will increase as more vendors look to move away from older proprietary phone operating systems, while Microsoft will receive a boost from the arrival of new models, and new brands, coming to market using Windows Mobile 6.0. The still under-penetrated market for mobile e-mail will provide tremendous growth opportunities for Microsoft, RIM and others, Lashford added. But in volume terms it will be hard to catch Symbian in the near future, particularly if it provides a competitive foundation for consumer-oriented smart phones at the lower price points that market demands.

So is it safe to say organizers aren't dead as the IDC report from Feb. 8th suggests? But rather people prefer organizers with celluar radios?

Agreed. I have always thought that all of this 'the sky is falling...' cynicism about the death of the pda / organizer is completely absurd. It is identical to the early mid nineties with desktop PCs. Back then, i don't recall people saying 'PCs are dying!' just because they got internet capability. It's the same thing. The only difference is that you can't upgrade a PDA to cellular capability in the way that PCs could be upgraded to add internet connectivity - so u buy a new one.