Gx5 has released version 1.0 of DialByPhoto, a replacement for the Treo's built-in phone app. It's certainly much better-looking, but has the drive for better graphics left usability by the wayside? Read on for the full review... 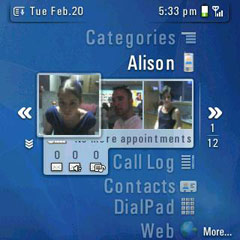 If there's one consistent critcism of the Treo (and Palm OS in general), it's the dated look-and-feel of the interface. With the Treo 680's new tabbed Phone app Palm are certainly taking steps in the right direction, but their efforts are undermined by outdated fonts and "flat" scrollbars and buttons. DialByPhoto (DBP) does away with the standard PalmOS UI elements altogether and instead implements its own graphical style. The result is fantastic: DBP looks great and much more befitting of a modern device like the Treo than the usual Palm OS fare. Everything from the status bar to the dial pad has been revamped; nothing is left untouched.

You can customise the layout of the interface in four different ways:

In addition to the different layouts, you also have the option of changing the background image to one of your choosing. The default image is a generic, unintrusive dark blue that looks quite nice and worked just fine for my purposes. If you're looking for some variety, then Gx5 has a nice (and cheap!) treo wallpaper pack available.

Graphics, of course, are only half the story: what new usability features has DBP brought to the table?

The most obvious new addition is the Photo Speed Dial. Like Palm's plugin for Windows Mobile Treos, DBP allows you to assign contacts to a photo strip for one-tap dialing. In a nice touch, you can also select a picture and press the Messaging hard button to go straight to an SMS message. It's simple to set up, but gets repetitive if there are multiple people you want to add to the list. As mentioned earlier, you can also enlarge the strip from 3 photos across to a 3x3 grid, giving you convenient thumb-sized access to up to 9 contacts at once.

Apart from the PSD, DBP also gives us the welcome addition of a web search box. Just tap the "Web" option and you'll be presented with a Google search box. Type in whatever you're searching for and you'll be whisked away into Blazer to view the results. You're also given the option of searching Wikipedia, Dictionary.com, or just typing in a plain old URL. There are also Movies and Local Businesses and Services searches that use Google's Local and Movie Showtimes services to give you access to location-based information. Top marks here; the only thing missing is the ability to add additional search engines to your list.

I also appreciated the way the virtual dial pad "clicks" when you press a button; apart from the aural feedback, it also briefly turns black, which is a much better visual cue than the standard "depression" animation that occurs on the built-in Phone app. 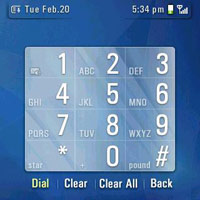 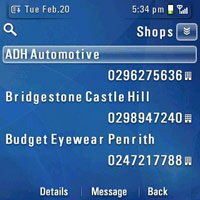 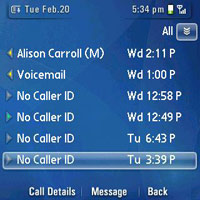 DBP also has its own Contacts and Call Log applications that present themselves in the DBP graphical style. As with the rest of the app, they look superb. Plus, you can also see the call duration, which was a glaring omission from the 680 Phone app. Finally, a reject by SMS feature is included: good news for Treo 650 owners, who have been left in the cold for awhile on that front.

All Your Favorites Are Belong To Us

There are two problems with DBP: the first is the absence of Favorites. Unlike the standard Phone app, DBP does not have a Favorites menu. While this problem is somewhat mitigated for speed dialing by the PSD, you won't have one-button access to your favourite applications, weblinks or group SMS contacts anymore. Depending on how often you use Favorites, this may be a dealbreaker.

The second problem is the placement and size of the main screen options. When you're viewing DBP in Horizontal mode, or the PSD in Extended mode (the 3x3 grid), the DBP menu options are shrunk to a size that renders them virtually impossible to hit with a thumb, leaving you with only the 5-way navigator to select things. This wouldn't be so much of a problem if there weren't so many options visible at once; for instance, say you wanted to choose Contacts. By default, the focus is on the top row of the extended PSD, so you'll have to click down at least three times to get past the PSD to the options, and then another three clicks to move from the upcoming calendar appointment to the Call Log to Contacts. Cumbersome to say the least! 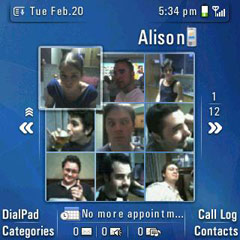 However, if the interface is in Vertical mode then this isn't a worry, as the buttons become thumb-sized and a lot easier to hit.

Another minor niggle crops up with the way DBP handles the Phone hard button on the Treo 650 and 700p. The built-in Phone app uses the hard button to bring up a menu that displays recently dialed numbers, Dial Pad and Call Log options. DBP can be set to launch from the Phone app if your press the hard button, thus neutering this menu. However, you can disable this toggling from the DBP Settings menu. (And if you're using DBP, then you're likely not going to be needing the built-in Phone app anyway.)

Disappointingly, the on-call screen is unchanged, but I suspect that it is hardwired into the Treo and can't be altered. (Do any developers care to correct me?) Finally, the Voicemail notification can be somewhat unreliable and doesn't always let you know when you have new messages waiting.

DialByPhoto is a great-looking, well-designed piece of software which brings some clever new features to Palm OS Treos. If you're finding yourself looking jealously at the extra functionality Palm has bolted onto their WinMob Treos, or are just sick of the dated looks of the built-in Phone app, then this may be just what you're looking for.

DialByPhoto is available from the PIC Software Store. It costs $14.95 and is currently on special for $11.95. There is also a free trial available.

FWIW - I set DialByPhoto to launch the original Phone app with a second tap of the phone hardkey. I then set the original phone app's default screen view to 'favorites'. Finally, I set the favorites to frequently used apps and boring work contacts.

So, I can enjoy the superior user experience of DialByPhoto, and still get access to favorites with a second (or two, if I'm not in phone mode) tap.

a couple of other nags

Thanks for the good review. I agree with your assessments on this app. I like it and I bought it. The enhanced look is worth the price of admission. But there are a few issues. The one's you brought up are valid. Especially having to use the 5 way to get anywhere. The options are generally too small to get to with a thumb and that is a problem.

The second issue is that when something is selected it turns yellow. That is great indoors but if you are outside or in the car, forget it. I have no idea what is selected because it is small and I can't see it in the outside light. They need to work on daylight visibility.

Finally, my only other beef is that if I copy a phone number from an email or out of a calendar appointment, I can't go to the dial screen and hit the menu button and choose paste like I can in the standard phone app. That means I have to hit the phone button twice and go to the built in phone application.

Awesome app! Everything works flawlessly. Takes the boringPalm look to a new level.