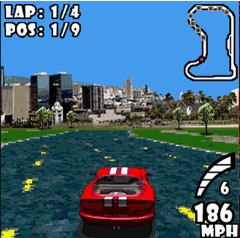 The release of OS5 and the Tungsten T ushered a whole new era of optimism for the Palm OS and the Palm-economy in general. However, despite purchasing an original Tungsten T upon release in November 2002, I didnt find a particular wow-worthy gaming title that levered the full capabilities of OS5 until the spring of 2003. That fateful day was when Astraware and Pazzazz Games released what many gamers claim is still the definitive Palm OS racing title, GTS Racing. I immediately purchased the game upon its initial release and have been playing it on and off for nearly four years now. Read on to see how this time-tested program has aged extremely well (with the help of an occasional update from Astraware, of course!)

Program Testing and Methodology
I tested GTS Racing v1.05.23 on my Treo 700p and Palm TX. This is the most recent version of the title, having been released in February 2006. Over the past few years various revisions of the game have performed flawlessly on a series of OS 5 Palm devices (T|T series, T5, T|C, LifeDrive etc). Due to its mature status, the game is nearly bug-free and rock solid stable, other than one small but annoying glitch (though some may view the alert as a bonus feature). On my 700p, the little bell notification icon in the top left corner of the screen continues to flash even during gameplay, often creating graphical glitches during the game play screens.

Graphically, this 2003-era game is still a stunner. While 320 x 480 graphics on T3 and better Palm devices would be fantastic, Im used to being disappointed when it comes to Palm OS action titles and full screen support. While Ive never had the opportunity to test it, fullscreen accelerated graphics are available to Tapwave Zodiac users. Any long-time console gamer who remembers the glory days of F-Zero on the Super Nintendo consoles Mode 7 effects will feel at home with GTS Racing. The track basically rotates and scales around the players car. The illusion of speed and depth, while not realistically convincing, is still fast and amazingly well done for the lowly Palm OS and its related hardware.

Four gameplay modes are available  Single Race, Challenge Cup, Grand Tour, and Championship. Since most of my gaming is during quick breaks at work or while waiting in lobbies or traveling, I usually stick to playing through a single race or two. When time permits I do enjoy playing in Challenge Cup mode, which stipulates the driver finish 4th or better in each race (not as easy as it sounds). All game modes offer four difficulty modes, with extreme mode being unsurprisingly nigh impossible. Normal difficulty offers a fair challenge for the average gamer or casual racing fan. 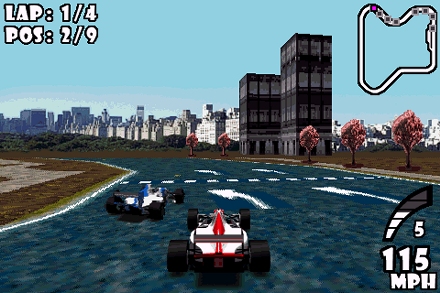 As usual, the hard button and control scheme limitations inherent in most Palm OS devices are the main culprits when failing to achieve true mastery of the game. While there are a few minor handling and acceleration differences amongst the three generic car types offered in the game, I didnt notice drastically different results when racing with one particular car vs. the others. Regardless of the slight differences in handling properties and acceleration characteristics, I usually go with the Dodge Viper-esque Sports Car. This is due to the garish color scheme of the coupe and, well, because Ive always been an admirer of the Viper in real life. 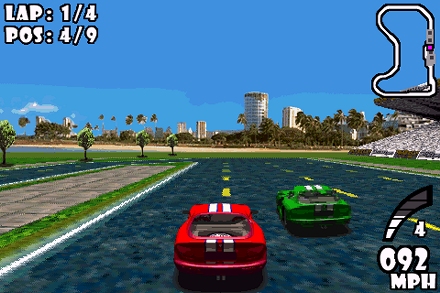 Conclusion
GTS Racing undoubtedly ruled the Palm OS racing roost the first few years of its existence. Annual updates from Astraware have certainly kept the game feeling fairly fresh and bug-free. As far as overall preference, I still find it a toss-up between the older but time-tested arcade action of GTS Racing and the technical prowess of Raging Thunder. My recent play outings have been oriented more towards Raging Thunder but this is likely because of that titles newness in comparison to GTS. Since both titles have their relative merits, Ill continue to keep both on my SD card and alternate between them as I see fit.

Its hard to make a poor choice with any Astraware products and this one is no exception. GTS Racing makes for a nice break from their many puzzle titles and does a fine job of maintaining the companys reputation for fun titles with excellent support.

GTS Racing is available now for $19.95. Both Palm OS and Windows Mobile versions are available.

Just a quick note for everyone:

The first pic (the red car by itself) is of the regular 320x320 Palm version of the game.

The two widescreen shots are from the Zodiac-enhanced version.

I think it is certainly a bit sad to read a review of GTS Racing in the year of 2007 and still rated it as still one of best Palm OS game titles. Doesn't that mean the Palm platform is so bad in gaming?

While GTS racing is good in 2003 or 2004 at maximum. I am sure anyone have seen what game graphics are capable on a Sony PSP!

If you are looking for funny games, look at Nintendo NDS and you will wonder why Palm games can't have the same fun!

Seems like you have to know the secret codes to turn the car. Cryptic - anyone know what a 'Hard One' is? (Aside from the obvious humor). Can't play it at this point, so kind of hard to say if I'd want it, but looks like it could be fun.