Built on a modified version of the same engine powering the earlier GTS Racing, Hellfire: Apache vs Hind is essentially Astraware and Pazzazz Games 3D take on the classic Choplifter action title. This single player-only game offers the player a choice of commanding either an American or Russian gunship through a variety of global hotspots.

During each mission, the player must not only obliterate the enemy forces but also attempt to rescue of your captured comrades held in hardened bunkers. There are 16 missions of combat action featuring realistic pre-rendered player helicopters with accurate weapon loadouts and capabilities.

Technical Details
Hellfire: Apache vs. Hind is available now for Palm OS for $19.95. It requires a Palm OS 5.0 device with a 320 x 320 or better screen. Four hardware buttons are also required to play the game. I tested version 1.02.29 on my 700p and TX without incident. A feature-limited trial version is offered for download. A Pocket PC version is also available. 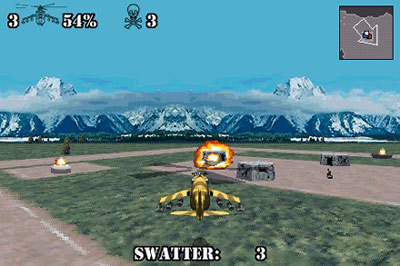 Conclusion
A definite must-have if you grew up playing Choplifter on the Apple II like I did! Hellfire seems better suited to the hardware restraints and control limitations of the Palm OS than its earlier brethren GTS Racing. I hope Astraware continues to support this fine title with future version updates and/or a mission pack or proper sequel.

This and GTS are at least a couple years old. :-/

I almost thought PalmInfoCenter has some problems that some old reviews or news re-appear as new...

What else IS there to review?

Well, there's an absolute dearth of quality Palm OS titles out nowadays. And the handful of ones that do get released are immediately pounced upon by everyone and their brother and hastily reviewed all over the web.

Since the other Palm OS sites have the market for day-glo, candy colored puzzle titles absolutely cornered, I'm trying to focus on non-puzzle titles and/or overlooked gems. Also, keep in mind that the pinnacle of Palm OS software development probably occured around 2003 or 2004 or so--OS5 was in full swing & it was immediately prior to the decline of the user base. After 2004, the major publishers either closed, scaled back their efforts or jumped ship to PPC/WinMob.

There's also a lot to be learned in revisiting older titles that have received sporadic updates over the years to see how they perform on more recent devices (the hard button reshuffling on the NVFS Palm PDAs and then again on the Treo 700p & 680 spring immediately to mind).

As always, if you know of anything new & cool that Ryan and I may have missed (other than Arcade Reality-I am about to post a review of that one), by all means feel free to contribute a guest review and/or send an e-mail and tell us about it!

RE: What else IS there to review?

I was just saying it should have been done sooner. :-P

RE: What else IS there to review?

Trust me, it gets depressing scouring the web looking for new Palm OS games to review! Heck, at this stage, it's a challenge to find anything worthwhile software-wise to review!