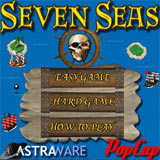 Seven Seas is Astraware and PopCaps take on high-stakes action and strategy on the high seas. Seven Seas is hard to categorize but easy to play. Essentially, its a pirate-themed version of Battleship with some real-time, cannon blastin action elements (think Rampart) and chess (think Rooks Revenge) strategy thrown in for good measure.

During each single-player-only mission, the player must not only obliterate the enemy naval fleets but also avoid the usual nautical perils such as whirlpools, islands and sea monsters. 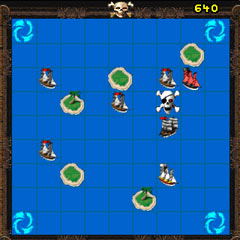 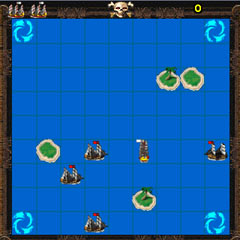 Technical Details
Seven Seas is available now from Astraware for Palm OS 4 or 5 devices at a very reasonable cost of $9.95. It is also available as part of the PopCap Games Pack 1. Palm OS 4 and 5 devices are supported in160x160 and 320x320 resolutions, both color and grayscale. The game takes up 588k of memory for the high-resolution OS5 executable. It runs fine from an external SD card.

The only major technical problem I encountered was finding my Treo 700ps home button disabled during gameplay. Fortunately, my TXs ever-present status bar keeps this from being an issue on this device. Unlike some older titles that require a reset to quit the game, I was fortunately able to exit Seven Seas by pressing shift + home on my Treo.

I tested version 2.3 of the game. While this is the most current version of the title, it was last updated in September 2004. The game ran without problems on my 700p and TX other than the home button issue noted above.

A limited trial version is offered for download. In addition to the Palm OS version, versions for Windows XP and Windows Mobile/PPocket PC are also available.

Conclusion
Typical of most PopCap/Astraware productions, Seven Seas is just a fun little game in every aspect. I found it a nice mixture between action and strategy. Its colorful, cartoony graphics and appropriately pirate-themed audio is a great addition to the game. I just hope Astraware can crank out a new version of this title in the near future to support the reshuffled hardware buttons of the recent Treo devices. For owners of older Palm devices, this is a fine title that has stood the test of time and is easily worth the sub-$10 purchase price.

How sad is it when reviewers have to resort to reviewing games that came out 3 years ago?

I perioidically like to do an "oldie but goldie" game review, especially for titles I still enjoy to this day and/or seem to have been overlooked.

In fact, I had earmarked a batch of solid older ('02-'04) Palm OS games last year that I felt deserved a 2nd look. It's also worthwhile reporting on compatibility results with the latest Palm OS devices when running titles last updated a few years ago prior to the shift to Treos and/or the NVFS transition. This is actually the pentultimate title in the "oldies" reviews, so it'll just be new stuff from here on out unless there's a particular reason to revisit an older title.

As always, if you or anyone else has any hot new Palm OS releases (games or apps) that we may have overlooked, please point 'em out or drop Ryan a line and I'll be all over it.

This pirating of Palm hardware has got to stop!!!