Palm has released a number of new accessories including a IR wireless keyboard, a 1.3MP SD digital camera and a multifunction stylus. Most of the new accessories are available now or by October 1st. The company has also debuted new cases, styli and accessory kits. 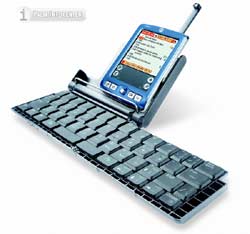 Wireless Keyboard
Palm has developed a wireless foldable keyboard. The keyboard connects to a Palm branded handheld wirelessly via IR. It operates on two "AAA" batteries for three to six months of life, depending on usage.

The keyboard has a similar folding design as the Palm ultra thin keyboard, and uses the same keyset array. It weighs 5.75 ounces and will retail for $69.95 USD. It works with all current Palm handhelds.

1.3 Mega Pixel SD Camera
Palm has also come out with a new SDIO digital Camera. The new camera card has a 1.3 MP CCD and can take 24-bit color JPEG photos at up to 1280 x 1024 resolution. Other features include adjustable focus for close-up shots or landscapes, digital zoom for photos, a swivel lens for self-portraits or forward-facing photos, and a video capture function. Compatible with all current color Palm handhelds with Palm Photos or PhotoBase software (Tungsten C, Tungsten T and Tungsten T2 handhelds). The new camera card is scheduled to be available in December for $99.95 USD. 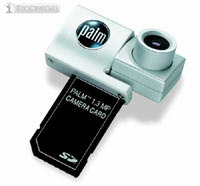 Zire lighted Stylus and Tungsten Gold Plated Stylus
Palm's answer to the lack of a backlight in the original Zire is a new light up stylus. The replacement stylus includes a translucent tip that lights up and illuminates. On the higher end a new 24 karat gold plated stylus sells for $29. It fits the Palm Tungsten C and W handhelds.

The above accessories are available for online order from the Palm.com Store.

It's hard to tell from the pictures, but given that the keyboard communicates with the PDA via the IR port, it may even be possible to have the PDA charging at the same time. And with the keyboard running off it's own AAA cells, it looks very interesting indeed.

I think more beneficial would be a BT keyboard in the slim XT form. (especially if i have to put batteries in it)(why not a BT w/ rechargable then they could justify a $99 price tag) I too do not understand why the 1st XT is $99 & now an IR version is $69...

The camera is nice with a higher resolution, & video capture, but to have no memory, or expansion for memory, that hurts.. (at least this in a Zodiac wouldn't be bad, you have a second slot) but also the lack of a flash decreases it usefulness (my brother's Samsung mobile phone has a tiny flash, not that it does a lot, but for close ups of parts it would be useful) & looking at the size of that attahchment is should have something.

the pen to me is pointless.. really unless it fits the unit or somehow goes well with it... forget about it.. [IMHO] but for those it works for, enjoy.

a great product would be a Wi-Fi SD card ! [b or g flavor]

see you all @ Tapwave.com tomorrow moring for pre-orders! :-)

=> NO, I don't think that the designers should have used BT instead of IR for this keyboard.

hkklife @ 9/16/2003 5:22:39 PM #
I seem to recall this having been answered a while ago, with the debut of that Microinnovations IR keyboard, but I couldn't dig up the answer to it right away.

Does anyone know if a Palm (any model) can be online via BT or modem/cell on the UC and receive input from an IR keyboard? Is it a driver issue or a Palm OS/hardware limitation?

That's a good question. Earlier in the another room watching TV and using my T|T, VeriChat and Palm folding keyboard (1st generation). When I upgrade to a Zodiac and get the IR keyboard I hope I can still do that.

Now if they only had multi SD slots..

I wonder if this camera would work with the Zodiac's duel SD slots?

hkklife @ 9/16/2003 11:29:22 AM #
Well, this solution could be remedied if they'd just put a SMIDGEN of memory into the camera itself-4mb would suffice, at least for the low-res shots these cameras are capable of, at least until the user could offload them onto a dedicated SD for storage or a desktop. Anyway, I'll keep on waiting, thank you.

Also, the pictures from the new Clies with the "assist light" (not a flash) are surprisingly decent looking. It's a shame whoever OEMs these for Palm couldn't have come up with some sort of similar solution involving white LEDs.

The other accessories announced today are just rebranded stuff you could get from Belkin or Brando-just not as stylish looking. Still, a nice move on Palm's part but what I'd like to see are some really innovative gadgets that utilize the UC-perhaps a Guyver-type sled with wi-fi, an extended battery or charger and another SD slot? Or a newer, smaller BT card. I also think it might be a good move by Palm to try and rebrand one of the memory/wi-fi SD cards from Sandisk as a "Palm wireless storage solution" type of gadget. Their margins on the current Palm-branded backup cards and SD cards are very good...

Hmmm, that possibility hadn't occurred to me.

"I know you are but what am I"

"What are you? You're about to get your ground pin yanked out, is what you are..."

Who knew SD really stood for Spontaneous Dueling
Think I'll just stick with the one slot then...

Wollombi @ 9/16/2003 7:46:02 PM #
One positive is that OS6 will supposedly allow native files in RAM, which with enough RAM would make this camera pretty useful on an OS6 machine.

Just a thought. I'd rather have dual slots, but at least PalmSource is working on some kind of solution.

Palm store has no record of any of the above!

GHaavy @ 9/16/2003 3:14:42 PM #
These products have only been announced. They won't be released for sale until October 1st (all except the camera, which will be released at some later date).

You won't see them show up on the Pa1mOne website until the 1st (although other websites may 'jump the gun', so to speak).

I think I'd rather use the locking nonbattery XT keyboard in my lap (reclining with my feet up) and a T3 sitting nearby on my desk at eye level. I hate the poor laptop ergonomics of hunching over to read a screen that is attached to a keyboard, poor ergonomics that is only made worse on a handheld.

Please don't tell me to get a thumboard. I hate those even more.

Navamske @ 9/16/2003 1:22:51 PM #
Does the camera *really* take JPGs? That similar Veo camera was advertised as taking JPGs, but it actually saved the images in some proprietary format and they didn't become JPGs until you sync'd with your PC. That seems to me to defeat the purpose of having an on-the-go camera with you all the time. I want to be able to see the image on the Palm immediately, then transfer it to an SD card and from there, via a card reader, to whatever PC I happen to be sitting at. This is clumsy because you have to swap out the camera for the SD card, but it's still better than the Veo way.

Altema @ 9/16/2003 3:04:52 PM #
They have a work-around for the Veo camera called Veo Transfer. It takes the Veo images and 'develops' them, producing jpegs on the card. Hope a similar option is available for this if it does not have it's own memory.

palmhiker @ 9/16/2003 1:35:49 PM #
It looks like the apparatus that holds the PDA is designed to allow for a landscape orientation. This would be a pretty sweet setup if the keyboard folds down to the size of the current ultra-thin.

My thoughts exactly. One of the reasons many would want a T3 is because they could work on doc or xls files in landscape mode. But, since the T3 won't have a second universal connector comming out its side, well, you'd have to have some other solution. The "tray" on this thing looks just the right length to hold your T3 in landscape. And if that indeed is the case, you could possibly hook a sync/charging cable up to it and charge while typing. (Note that the operative word in that last sentence is "possibly").

It runs on 2 AAA and power should last for 2-6 mo. with typical usage (however that's defined...)

I may get a Quadra for myself, I like the LED flashlight, the laser pointer is not a need for me. The downside to multi-function pens is that they always seem to have some loose parts that rattle around and make noise. The only exception so far is the cheapy Papermate PhD Multi, which is nice but doesn't fit in my case. Otherwise I would use the cheap but nice PhD Multi.

I love it. It came engraved in an aluminum case, and I got it within a week. It's got a pen, stylus, and laser pointer, and comes with 2 extra batteries for the pointer.

Hey everyone: It is palmOne not pa1mOne

Not that palmOne without the "1" is so much better...

The official name is, as you suggest, PalmOne.

Their logo, however, clearly depicts the number '1' in place of the 'L', hence some of the confusion.

So everyone is right.

Don't blame us for joking about it...we're not the ones that designed that logo.

G M Fude @ 9/17/2003 3:06:49 AM #
I think the letter 'el' that looks like a numeral 'one' has also been done for trademark reasons. It's probably a more recognisable design that is easier to register as a trademark.

Or maybe there were some mind-altering substances involved. I don't know.