Reader reports have begun to come in that early Tapwave Zodiac pre-orders have begun shipping. The Zodiac is the first Palm OS handheld designed primarily for gaming and mobile entertainment.

Zodiac Shipping Reports
According to user reports, first-day Zodiac preorders are shipping. Customers are notified by an email from Tapwave, that the products ordered are now in stock, and will ship on 10/31. Apparently, Tapwave doesn't ship or deliver on Saturdays, so people who chose the next day delivery option should receive their orders on Monday.

The Zodiac is based on Palm OS 5.2 and features a 3.8 inch diagonal 480 x 320 pixel screen, analog joystick navigation with integrated triggers and buttons, 3D graphics acceleration, stereo sound and Bluetooth for multiplayer wireless gaming. It will have two SDIO expansion slots for memory expansion, games and accessories such as a digital camera. Internally it runs a 200mhz i.MX1 Motorola ARM9 Processor, and has a ATI® Imageon W4200 graphics accelerator (with 8MB dedicated SDRAM) and a Yamaha audio component. 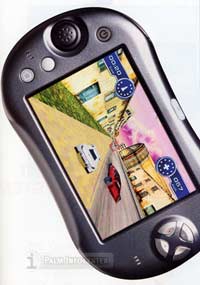 Tapwave has created a comprehensive program to attract and support a broad range of developers and publishers from the professional video game industry and the Palm OS community. Tapwave is will launch with a number of premier video game titles from companies like Activision, Infogrames, Midway, and others.

Launch Games
It will launch with roughly 15-20 games optimized for it including, "Neverwinter Nights," "Tony Hawk", "Spyhunter" and "Doom II." Games will also be sold on SD cards for $29.95. Games that are labeled tuned or certified for Zodiac are specifically optimized for the console and have passed third-party quality testing. These games must take advantage of specific features found on the Tapwave Zodiac hardware, such as the analog controller, the 480 x 320 display, Bluetooth and more, in order to be awarded with these qualifications.

Developer Support
For developers, Tapwave offers a fully customized version of the X-Forge 3D game engine (www.x-forge.com) for rapid prototype and development. In conjunction with the Tapwave hardware offerings, the company will both publish games and continue to aggressively support independent game development specifically for the Tapwave platform. By keeping the platform open, building a strong developer support program, and providing a distribution channel, Tapwave will leverage the thousands of developers focused on mobile gaming and build a strong win-win business opportunity. Since announcing the company in May 2003, more than 500 game developers have signed up for the Tapwave development program and requested the Software Development Kit (SDK).

Thanks to Craig Simpson and others for the tip.

Especially now that Sony Japan has officially announced new CLIEs with Palm OS6 will come out in 2004 Spring.

One can imagine new OS6 devices also coming out around that time too. So would anyone not hold out a few months for a OS6 PDA ? Even for a OS6 Tapwave?

indesman @ 10/31/2003 2:11:42 PM #
I think it is going to hurt their sales since most people who are looking at high end devices are aware that OS6 is coming. I think I could jump more easily if Tapwave came out with a statement regarding an OS6 upgrade. I'm really interested in the Zodiac but I'm on a three year upgrade cycle so I don't want to miss out on what's coming. I guess I'll have to limp along another 6 months with my IIIx.

Never, ever buy anything, until you need it. After you buy something, stop looking at prices and features for at least 5-6 months.

OS 6 will be a fundamental shift for the Palm OS. Currently there are very, very few applications that run under OS 5 only (most work under OS 5, 4, 3, and even older releases). There will be many OS 6 only applications. It's like buying an OS 9 Mac that'll never run OS X, just a few months before the OS X release.

Furthermore, while it's true that in the future there will be better devices with better features, improvement doesn't progress at an even rate. Look at the proliferation of new devices in new formats with new features that have come on the market in the past two months. I don't think there's ever been so much innovation in the Palm world in such a short period of time.

Foo Fighter @ 10/31/2003 2:28:35 PM #
Unfortunately it looks like Tapwave is only processing orders placed on 9/17. Those of us who ordered the next day, or later, won't be served until next week, hopefully Monday. And according to the CSR I spoke with, orders are processed during normal weekday business hours only, which rules out any chance of getting a confirmation email over the weekend. Bummer. 8^(

bcombee @ 10/31/2003 7:06:50 PM #
From working directly with the TapWave people, I know firsthand that they are putting in a LOT of overtime right now... I'd expect that getting the manufacturing line up and going, as well as getting the final software builds ready, has been very challenging.

How is it for Palm functions?

jbeedham @ 10/31/2003 7:25:40 PM #
After seeing the N-Gage I was expected to be disappointed by this device. However, this may become a major contender since it does not look as stupid as the N-Gage. With the specs, it seems like the best value for a Palm with a 320x480 screen. My question is, how good is it for regular Palm programs and stuff?

RE: How is it for Palm functions?

It has incredible controls, making playing even normal Palm games a much more enjoyable experience. And yes, it's completely backwards compatible, just like any other Palm OS 5 device. If a game or app works on Tungsten|T3, it'll work on Zodiac too. The analog joystick acts like a digital 5-way-pad when used with normal Palm apps.

The screen is large, bright and very pleasant to look at. If you've ever seen a Sony UX50, you'd know how important these 3.8" are.

The reason behind all of this is that Zodiac is nothing more than a handheld, *designed* with games in mind. It's not a game console, with Palm functionality slapped on. Everything's been worked out 'till perfection.

macshimidh @ 11/3/2003 11:13:33 AM #
I preordered at 5:45am on the first day, and paid for next day/afternoon delivery. All through the weekend (and in fact, even currently) my order status on Tapwave's site was unchanged and my card was not billed. However, my Zodiac arrived by 9:30am EST tis morning.

This thing has been appealing to me for months. I'm really into it.

But will I really miss that much if I decide to buy it and not get an OS6 machine? Inevitably I will move up there, but is it a reason not to move to the Zodiac?

I'll have to wait until someone's written a review on this before I buy I think. I'd like to know how it REALLY works from some of the regulars around here.

I dunno which PDA you're using presently, but let me say that I'm pretty happy switching from TT1 to TT3 for about $150 (I sold my T1 at a good price).

Hey, same here. The wife did not want a hand-me-down this time after seeing the T3, but I also got a good price for my T1. If I did not use my device for work, I would have considered the Tapwave. But, I am enjoying the T3 immensely. Only drawback for gaming is getting used to the button layout for games like the old SpyHunter and GTS Racing. Some games work better, but the two-handed shooter games take a little getting used to.