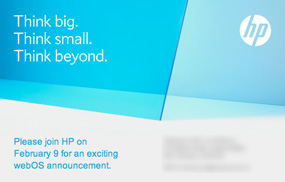 HP has just sent out a press invitations for an "Exciting WebOS announcement" on February 9th in San Francisco. Details are scant on the announcement but the tag line of "Think big. Think small. Think beyond" may indeed indicate a multitude of forthcoming devices, quite possibly a Pixi successor, a large-screen keyboardless device, and of course, the mythical "PalmPad".

Of course, the Palm name or logo is entirely absent from this invitation, which will only fan the flames that the "Palm" brand will indeed be retired after the arrival of the Pre 2 and a nearly 20-year run in some capacity.

It will be a sad day indeed if not even the *owner* of Palm describes their products as Palms.

In a way, there is a certain psychological advantage for dispensing with the name. If a person really wants to write a history of Palm, at least now there will be a definitive end-point of *when* it became OK to let go of one's passion for Palm. In the status quo, however, a historian writing the history of Palm would need to keep following what happens with HP.

Will there ever be an OS that unites so many people around a common experience the way that happened with PalmOS?

Around a common experience?? Hmmm, the early days of the Mac were comparable, I suppose, but I'd say the early/glory days of Palm OS (1996-2003) were pretty much unparalled, especially considering the rise to prominence of the www, newsgroups and other online forums where users could share tips, advice, and programs.

Anyway, back to the present. My predictions for the event?

-Ultra-thin Pixi 2 announced in Feb, to be available in late Feb/early March

-Large-screen (4", 800x480) flagship WebOS device w/o a keyboard announced, to be available in April

-WebOS upgrades for legacy devices will be discussed briefly but the buck will be again passed back to the carriers. At this stage of the game, HP really isn't wanting to support Palm's old crud any more and they are hoping people will eventually give up hope and buy a new device instead of waiting for an OS update for a 2-year old Pre. HP's billions or not, this IS the make-or-break event for WebOS.

Actually, the event & announcement art just part of the risk--HP must have near-flawless execution and perfectly-executed timing to pull this one off. Within the next 3-6 months we will have dozens of Tegra2-powered Android smartphones & tablets running Gingerbread and Honeycomb, not to mention the iPad 2 and maybe even RIM's Playbook. And these devices won't just be vaporware, they will be available and hitting store shelves on a daily basis.
Pilot 1000->Pilot 5000->PalmPilot Pro->IIIe->Vx->m505->T|T->T|T2->T|C->T|T3->T|T5->Zodiac 2->TX->Verizon Treo 700P->Verizon Treo 755p->Verizon Moto Droid + Verizon Palm Centro-> Verizon Moto Droid X + Palm TX

Jon: We have a variety of products coming out. Next year we'll have a very different conversation.

3:12PM Kara: Okay, so when is your phone coming out? Is the Palm name going to continue?

Jon: What do you think?

Jon: Okay you heard it here first. You know honestly I have no allegiance to it. It has some good connotations, it has some bad.

Thanks for the link Gekko. He said it .... It's truly over. If they were going to use itl he would never say it had bad connotation or is just a benign name. Over.

Why don't they sell the name? Geeeesh, a lot of commoners still think highly of Palm, Pilot, & Treo. iI guess that would just feed a direct competitor.

Thanks for the link Gekko. He said it .... It's truly over. If they were going to use itl he would never say it had bad connotation or is just a benign name. Over.

Why don't they sell the name? Geeeesh, a lot of commoners still think highly of Palm, Pilot, & Treo. iI guess that would just feed a direct competitor.

the HTC Inspire 4G will be AT&T's version of the Desire HD. It features a 4.3-inch display, Android 2.2 (Froyo), HTC's updated Sense UI, an 8-megapixel camera with dual-LED flash, and it will be the first device in the U.S. to be compatible with HTCSense.com.

Or this just means there will be both HP and Palm devices. Maybe their WebOS tablet will still be HP and their WebOS phones will be Palm. "Palm" for a tablet doesn't make much sense anyhow. Call tablets "HP Pad" and handhelds/phones "HP Palm".

I'd hate to see HP toss the Palm name as it holds quite a bit of value in the mobile world. Compare that to WebOS - which almost nobody has heard of. The average Joe Schmoe out there thinks of Palm as, "didn't they used to make some neat PDAs - whatever happened to them?" In contrast, the average Joe Schmoe out there says, "WebOS? WTF is that??? I've heard of the iPhone, and I know there's this Google/Android thing, and Microsoft has phones - WTF is a WebOS? I ain't buying that."

If HP is planning to cash in on the "WebOS" name, they're even bigger idiots than I thought.

Going big or yet another delay?

I was actually hoping to see something new at CES. Now I'll have to wait yet another month at a time when my eighteen month old Pre Minus is almost ready for retirement.
Fool/Palm Apologist
Shouting down the PIC Faithful Since 2009
Screw convergence
Palm III->Visor Deluxe->Visor Platinum->Visor Prism->Tungsten E->Palm LifeDrive->Palm TX->Palm Pre
Visor Pro+VisorPhone->Treo 180g->Treo 270->Treo 600->Treo 680->T-Mobile G1->Palm Pre
http://mind-grapes.blogspot.com/

RE: Going big or yet another delay?

what are you a masochist or a sadist?

anybody else have PIC log in and posting issues?

YES. It seems that logging in to this website to post is very hit or miss. Sometimes I can, sometimes I can't, but in ALL events, the computer screen shows "Welcome, HyperScheduler."

This needs to be fixed.

I made some adjustments server-side last night. Hopefully this issue is resolved. If people are still having trouble, do let me know.

anybody else have PIC log in and posting issues?

Nobody else is. They're just trying to keep out the undesirables.

at least i'm trying unlike most of you.

Isn't Apple planning a press event for later this month to announce new products - sort of an end around on CES? HP is just taking a page out of Apple's playbook and is trying to have the final say by having theirs at the beginning of Feb.

So HP is planning an announcement event for AFTER the Verizon iPhone debuts. Sounds like the same fantastic timing Palm doomed itself with when locking Sprint into an exclusive on the Pre until after Christmas so Google's breakthrough Android could make all the VZW sales.

Only Palm fanatics wait in anticipation of WebOS announcements, the rest of the world has simply moved on.

BTW, I am still a Palm user as my wife has a Centro and I have a Treo 650 but I have a hard time believing WebOS will ever be anything more than a niche product at this point. Palm had their shot with the Pre but they blew it by giving Sprint an exclusive. Game, Set, and Match.

Hey, "the PC guys are not going to just walk in".
Pat Horne

Actually as "PC guys" they have one thing that the others don't have. They could supply a mini PC as an accessory that can be your own personal private cloud device. They can make them small enough to be slightly larger than a large wall wart. All it needs to do is have it connect to the internet and provide "cloud" services like storage, etc for people that do not want their information on the cloud like private businesses. All they'd need to provide is a server that will keep track of IP addresses and let the phone device know what the current IP address is sort of like a DNS service so that only that user's phone or phones can use that storage and they can have complete control over their data.

I may be old fashioned, but I don't believe that I should trust service providers more than I have to.

Awesome concepts. But, I would just be happy to be able to record phone calls again and see the year view in my Calendar again, all on something greater than a business card size display. Maybe I'm pushing too hard tho?
Pat Horne

Reverend - why don't you get this?

That is a smokin' hot device I must admit. According to CES announcements, is ATT saying that they are deploying HSPA+ (rebranded 4G) in all current 3G markets? Now, or when?
Pat Horne

Too Late for the iPhone - Android an unstoppable juggernaut

Too Late for the iPhone
by Dan Lyons
January 11, 2011 | 10:37pm
The tech buzz about Apple's new Verizon iPhone misses the point. While it would have snuffed the Android a year ago, Dan Lyons reports, Google's device has become an unstoppable juggernaut.

Apple will only sell 12 million iphones on Verizon this year in addition to 60 million ipads.

The company will be ruined!!! LOL!

Agreed; what a nut-job.

While I would say that any judgment about an Android versus iPhone platform battle is premature, it does pay to remember history. Apple is one company, producing one line of hardware. If they don't produce what you want... well, tough luck. Want a phone with a keyboard? No. Want a flip phone? No. Want a netbook? No. Want a 5" tablet? No.

This was what happened with Palm and the Treo. They had one device--extremely popular, yes, but one device. If you wanted anything else, you had to go to Windows Mobile. The same is true with Apple. If you want anything but their buttonless tablets, you have to buy Android. And you can do so for considerably cheaper than you can buy an iPhone.

Now, Apple has advantages Palm never had in the form of their ecosystem, iTunes, and their massive brand recognition. However, they'd be most unwise not to recognize that Android poses a very real threat to them, by undercutting their prices, absorbing large parts of the low and middle range phone market, and providing a far broader diversity of devices. I'm willing to bet you that most people who switch between the two platforms are going from Apple to Android, not the other way around.