Verizon's own website now shows a small teaser that states the Treo 600 smartphone is "coming soon." 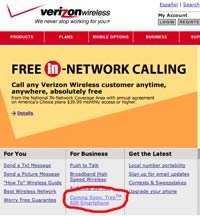 The screen capture to the right shows the Verizon website. In the business section there is a small mention of the Treo 600 and states it is coming soon. However, the link for the teaser goes to a page unavailable error.

palmOne said in early March that they were working with Verizon to deliver the Treo 600. One of the main reasons for the long delay to market has been Verizon's arduous handset approval process.

palmOne has previously commented that they plan to launch the Treo 600 with 4-5 new strategic carriers during 2004. Verizon is expected to be included within the list.

UPDATE:
As of 4/8 Verizon has removed the reference to the Treo 600.

Thanks to Michael Farner for the tip.

You hear that, Foo?

What makes all of you think Foo will actually *get* it?

Why, there are people here who haven't upgraded their PDA in years! YEARS!

This coming from a guy that drooled all over the TH55 when it was first announced, saying how exciting and wonderful it was....and never purchased one after all.

I have bought *nothing* yet, so the best you can complain is that I haven't bought a TH55 *yet*.

And now you know why I will never again purchase a PalmOS device with less than 64MB of RAM. 32 is way too limited for my tastes.

Uh, no it has 64. Well, actually 56 user accessible. But it can't be upgraded to the latest Windows Mobile Service pack. So no landscape view for me.

Now, I'll be absolutely content with the 610 is out on Verizon...or when Verizon has a Moto phone w/ built-in BT.

hgoldner @ 4/7/2004 7:13:00 PM #
I went to the demo days at Sprint last week to see the Treo 600 (again, again, again) and asked the PalmOne reps who were there *specifically* whether they anticipated any new Treo's this spring.

He said he believed that any new Treo's in the 600 or later series would not be out 'til fall.

My guess is Ryan's intelligence sources are more reliable than that, but the source was credible.

Of equal interest was the fact that while both PalmOne reps there had Treo's they said they regularly relied upon, I know that BOTH reps were using other Palm OS units because I saw them use them, rather than their Treo's.

Oh, and one of them was using a Clie....but emphatically denied it when pressed (and wouldn't take it out to disprove my assertion....)

Meanwhile, over at CompUSA

TooMuch @ 4/7/2004 8:52:11 PM #
You can order and receive a Treo 600 overnight from AT&T right now via their national sales over the phone. They have stock now (maybe not in the local retail stores yet). Just got one for an associate.

Proteus @ 4/8/2004 10:58:32 PM #
Too Much: Following your posting here, I called AT&T to see about this overnight availability. Nope, still out of stock -- heck, their CSRs can't even call up history information on their screens for it! (Talk about making no sense: They can't even talk from a frame of reference?) So, I dunno.... The other thing I'd keep in mind is that even if I did blunder into a window and somehow get a phone, what if there was a problem? No way to switch me out? That would require a LOT of faith -- in something just out (for them).

grapemonk @ 4/7/2004 6:24:11 PM #
It's interesting that it's not listed in the "For You" column. Does this mean it will only be available initally as part of a business package, and not to individuals?

Scott R @ 4/8/2004 10:21:45 AM #
It probably means that they'll be overpricing it. Targeted at consumers = consumer-friendly pricing. Targeted at business customers = overpriced.

They seem to have a PDA pricing scheme, and it's super dooper high. Am I just spoiled by the $10/$15 unlimited Vision from SprintPCS?

vesther @ 4/7/2004 11:56:26 PM #
Verizon better keep up with their promise mainly because all they've been offering lately are outdated equipment. Moreover, some of the phones apparently have either voice receiving issues, and/or clarity issues, such as the Motorola T720C.

Second of all, if Verizon was to attract Palm OS-souls, then Verizon shouldn't restrict the PalmOne Treo 600 to Business-Types, as the Treo 600 is probably gonna be used by all types of people who want a PDA and a Cell Phone in one device.

Third, I hope that Verizon can start a relationship with PalmOne in order to broaden choice of their electronic devices mainly because their selection of phones as I speak doesn't look too attractive at this point, mainly because the majority of the phones are either Audiovoxes or LGs. Let's see MORE Palm OS-based phones like this within Verizon's Network.

Finally, once Verizon starts a relationship with a Palm-OS-based Phone Maker, that Verizon continues its long-term commitment to provide Palm OS-based phones rather than providing Pocket PC-based phones. An alliance with MSN is just WAY TOO MUCH IMO.

In addition, it's not just Verizon that needs some culture, it's EVERYONE. US Cellular, Nextel, you name it.

Proteus @ 4/9/2004 11:49:56 AM #
Just to be clear, Verizon has had a relationship w/ a PalmOne supplier -- vis a vis the Kyocera 7235 -- for some time now. Realizing that the battery issue may be a fly in the ointment, I'm guessing they will none the less be looking to that history in terms of what they do w/ expanding Palm OS relationships. And you know, I know there are some who will criticize the Kyocera now that Samsung is out w/ the i500 and such. But remember that they were really out front w/ convergence, and when it first came out, the 7135 was considered top of the line.

Verizon is pathetically slow in rolling out new phones. For all the time they take in 'testing' and rollout, they STILL screw it up (ala 720c debacle).

Whoevers managing their handset programs should be fired. It's cost them a lot of subscribers and money.

This is welcome news. Verizon is very late to the party, but at least they're showing up this time.

WireLess_OneDer @ 4/8/2004 2:26:16 AM #
I'd say that poor network management will get you fired sooner than offering a limited choice of handsets. I'd bet the network engineers at AT&T Wireless are brushing up their resumes right now.

Get real! VZW doesn't make the handsets, they just sell them for use on their network. I'd fault Nokia, Motorola, Sony/Ericsson and the like, for not manufacturing phones for the VZW CDMA network.

VZW would love to offer all of those cool Nokias with ringtones, bluetooth, flashing lights...etc...
But Nokia has to make them before VZW can sell them!

PalmOne has ONE device for sale to cellular carriers the Treo 600. Atleast LG and Samsung have a complete line of phones in their lineup.

So let me see...VZW is supposed to drop everything and get the Treo600 approved so that the handful of users who want to use a 600 will be delighted??????

Buy a Treo 600 and go with Sprint.....of course it doesn't matter how good the phone is if the network sucks.

To a Mobile PC phone.

Gekko @ 4/8/2004 10:49:52 PM #
Does Verizon Wireless use ONE network for all their phones or is it like AT&T Wireless where they have 2 networks - a TDMA one and a GPRS one? Are all Verizon's phones/network CDMA only?

AT&T's TDMA Network is great but can't do data well, and their GPRS Network sucks. I use the AT&T TDMA network.

I may have to defect to Verizon if the data/voice coverage is extensive/all-in-one.

Foo Fighter @ 4/9/2004 12:09:32 PM #
Verizon uses all CDMA. Except for new broadband network called EVDO they are preparing to roll out nationwide. Verizon will be the first wireless carrier offering broadband data speeds.

Foo Fighter @ 4/9/2004 12:27:44 PM #
Let me restate what I said earlier because it came out wrong. I meant to say that Verizon's network is COMPLETELY CDMA based, including the new broadband EVDO architecture.

No that's incorrect... The 1xEvDo that Foo is referring to is the 2nd generation roll out of cdma2000. The CDMA Treo600 ONLY supports 1xrtt and cannot run use 1xEvDo...sorry. AFAIK, it would require a completely different radio to support 1xEvDo just as the current quad-band GSM Treo600 cannot suport Edge. You have to wait for the next generation Treo to support these 3G standards...

Verizon's network is all CDMA and analog. It's CDMA network mostly works in the 800 MHz band while Sprint exclusivley works one the 1900 MHz frequency band. Verizon also has analog which is convenient in rural areas where digital coverage isn't as good, but this is irrelavent to Treo600 users b/c the Treo is only dual band 800/1900 MHz CDMA and does not have AMPs! DOH! Verizon wireless Express Network or data connectivity is based on 1xrtt although they have also begun rolling out 1xEvDo or "data only" in select market as well. Sprint has decided to completely forgoe Do and will jump straight to 1xEvDv at a later date fyi..

so are you saying in theory that a Verizon-Treo600 will not have the same coverage capability as another Verizon phone because the Treo doesn't do Analog?

Nothing theoretical about it. The Treo600 doesn't have AMPs and thus can't roam in anaolog. But the digital coverage of Verizon is pretty good and you have two digital bands to fall back on.

Besides the days of analog are numbered anyways. Companies like Verizon want to gradually move away from analog b/c their digital coverage has gotten better reducing the need for analog. Also, you can't access data connectivity if your using analag..

AT&T GPRS/GSM network sucks right now, especially in rural areas. Hopefully, the merger with Cingular will drastically increase coverage/quality. I don't want to switch from TDMA until the GPRS/GSM covers about 85%+ of the TDMA area.

Has anyone here recently switched from AT&T TDMA to AT&T GPRS/GSM? Comments?