The arrival of August brings not only the close of summer but the annual rite of the back-to-shopping season that's always a strong period for tech gear sales. Based on a leaked weekly sales flyer scan, Best Buy is kicking things into high gear the week of August 3rd-9th with a solid crop of Palm-related deals. As always, these deals may vary in availability or price from region to region.

Palm's newest remaining handhelds, the TX and Z22, both introduced in October 2005 and rapidly approaching their 3-year anniversary, are both marked down from Best Buy's usual prices. The Palm TX, still Palm's only Garnet-based product with 128MB RAM, 320x480 screen and Wi-Fi, rings in at an attractive $254.99, a $60 savings from Best Buy's strangely higher-than-MSRP usual price of $314.99. With the recent beta availability of an unofficial SDHC driver for older Palm devices such as the FAT32-enabled TX, this device's long-term viability just became quite a bit brighter. The entry-level Palm Z22 handheld gets a $10 price cut down to $89.99, a savings of ~$10 from its usual $99 price tag. 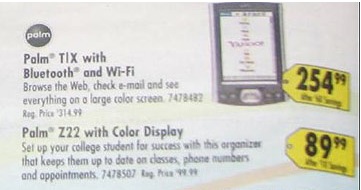 Palm's popular Palm smartphone, the Centro, has generally has seen lower pricing with its AT&T GSM version than with the CDMA carriers. Next week's upcoming Best Buy ad shows that all colors (white, black and the new electric blue) of the AT&T Centro are going to be offered for free in-store after several instant rebates and the usual 2- year contract. From my personal findings, white is the only Centro color carried in-store by many Best Buy locations, at least in the Southeast, but it's possible that the stores are ramping up their inventory in anticipation of next week's sale and the back to school rush.

The newest version of the Palm Centro, found on Verizon Wireless, will available for $49.99 for new contracts or for $99.99 for qualified current customer upgrades. Verizon's version of the Centro is available only in a dark "Cobalt Blue" color scheme and is at present the only CDMA version of the Centro to sport standard Google Maps location functionality. Of note is the fact that current Verizon customers can also pick up a Centro or a Treo 755p for free online by utilizing their "new every 2" $100 upgrade credit on top of the closeout price of $99. With last week's news of the 755p's EOL status by Verizon, availability of this device is certain to be quite limited but is reportedly still available in some zip codes. 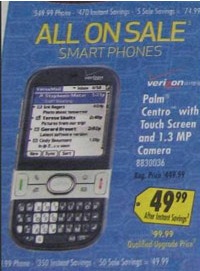 Best Buy has been quite aggressive recently about beefing up their mobile phone offerings as well as replacing mail-in rebates with "instant" savings and price drops. The previous low price record for the AT&T and Sprint Centros from Best Buy (and apparently any nationwide retail chain) has been $40, seen here. While some online retailers have offered "free" Centros for quote some time, they are usually tied into mail-in rebates and don't offer the instant gratification and security of purchasing from a physical establishment such as Best Buy. Additionally, Best Buy's free Reward Zone program offers customers a few dollars back in the form of gift certificates tied to members' monthly purchases.

With retail availability of Palm PDAs drying up left and right, the nod definitely goes to Best Buy for those wanting to nab one final Palm OS handheld or a "free" Centro in the coming week.

Wasn't the T|X $189 or something prior to Xmas last year, including some sort of extras?

I really don't understand Palm's pricing strategy. Seems if they can sell them sub-$200 and make a profit then they'd be better off keeping interest in the product by selling a somewhat decent PDA at an aggressive price rather one that just has people saying "eh...." Everyone including Nintendo DS is walking all over Palm, not even wasting the energy to kick them anymore.

Pricing the T|X and E2 as though it were 2007 or 2008 instead of 2002 would certainly generate some interest in Palm once again.

Paying my annual PDA update tax to Palm since 1997.

Yes, the best price on the TX thus far was $199 from Palm.com w/ a free wireless keyboard & free shipping. That was right around Black Friday '07. I am sure this holiday season will bring some nice deals, as Palm prepares to really blow out the remaining PDA stocks.

Palm's so deeply in bed with the domestic wireless carriers that they cannot be bothered to care what you or I think.

For starters, the Z22 should be mildly revamped to become the Z33 with an improved LCD, stereo headphone jack & microSD slot. It should be $75 (at most) and hanging in blister packaging on the shelves of every Target & Wal-Mart in the country.

Redo the E2 as the Palm E3 and basically make it a kid's/poor man's Treo. Basically a Treo 90 for the new generation. Give it a 320x320 LCD, decent battery capacity, wi-fi (drop the BT) and a Treo-style thumboard and sell it for $120-$150 and pull the rug out from under Sony's Mylo. Throw in an integrated mic and some solid bundled software and you have a compelling Mylo-style chat/messaging/email/VOIP device for the kiddies who can grow into Centros later on as well as the adult types who don't need/want a smartphone and cannot bother with Graffiti. Offer it in a handful of colors and print on the packaging "NO Contracts! NO long-term contracts! NO monthly charges!" That's the kind of rah-rah marketing that Palm's good at.

Then the TX simply needs a faster CPU, a higher-capacity battery, full SDHC support, a few gigs of internal flash storage, and a software revamp and position it at the $200-$250 pricepoint. Oh yeah, and a second model with a cellular radio as well!

A question for the financial types amongst us

Can someone with knowledge of the way these things are accounted for please give a (quick) plausible reason why Palm has not cut the MSRP of their remaining PDAs down to "reasonable" levels? I mean, wouldn't $50-$75(Z22), $125-$150(E2) and $175-$225 (TX) make much more sense and at least put these things within striking distance of competing with cut-rate cell phones, mp3 players, PMPs etc?

I mean, if we were to take a stroll through the local BB, I doubt we'd find ANY products/SKUs that had been on there shelves for 3+ years like Palm's handhelds (no, packaging refreshes for the E2 do not count) aside from maybe a pocket calculator or an alarm clock. Certainly nothing in the $200+ pricerange that continues to appear semi-regularly in the weekly circulars!

Would the most reasonable argument be:

1. Palm still plans to introduce new handhelds with more/better/newer features at the $99, $199, & $299 pricepoints and permanently reducing the pricing for the remaining handhelds by 10-20% would make people expect their replacement models to not exceed that price?

2. Palm is so greedy that they want to milk their dying handheld lineup as long as possible, even when their feature sets & pricetags make them look awfully archaic?

3. Palm's component costs have not dropped as much as we might be inclined to believe and the Z22 & TX were underpriced when they were launched nearly 3 years ago? (by that same logic, can we draw a conclusion that Palm's material cost on a Centro is not as cheap as we might assume and those devices are either being very heavily subsidized by the carriers and/or sold at a not-insubstantial loss by Palm in order to move units?

(revisiting point #3): FWIW, the unlocked Centro is $299 from Palm.com, which is precisey what the TX costs when it's not on sale. The Centro's component costs are increased by the cellular radio, SIM card slot, removable battery, physical keyboard & more bundled software on board (thus higher licensing fees to Normsoft, Dataviz etc) but the TX counters with wi-fi, a larger/high-res screen, a metal stylus etc. I'm no Digitimes reporter but I'f figure the unlocked GSM Centro & TX to be roughly similar in pricing, with the Centro honestly probably costing more material & support-wise on a per-unit basis.

P.S. I find it astonoshing that Apple's per-unit iPhone 3G cost is just ~$174.x. If that were Palm it'd probably be $100+ more. I wonder if/when Apple gets around to doing, say, a CDMA version with a removable battery (no more one size fits all GSM version) & a few more bundled features if they'll be able to enjoy such nice margins.

my guess is that they want to keep their ASP - "average selling price" number as high as possible to please the analysts. not sure it matters much given the dramatic sales decline of pdas. i think palm rightfully recognizes that the pda market is dead, so their is not much of a marketing/pricing strategy there in terms of trying to move units. the pda is like the typewriter, it's been supplanted by another device. there are no more pdas coming. it's over johnny, it's over!

apple has the clout and the volume where they can buy components much cheaper than a palm can, hence the lower relative costs/price and higher margins. vendors are bending over backwards fighting each other to win those contracts. these vendors may not make much on the deal, but they can tell their own analysts/shareholders/employees that "we provide the X for the iphone." also, apple has a diversified high-margin product portfolio of ipods, macs, itunes, etc. palm is a one-trick-pony which relies on smartphones for its revenue/profits. hence, the fooleo. the fooleo was an attempt to diversify. but i think the cart came before the horse:

colligan: hawkins, we desperately need to diversify our product portfolio. can you strike lightning again? any ideas?

hawkins: yes, i'll create the fooleo and it will be the most successful palm product yet.

colligan: great. because we've about milked this pda/smartphone thing for all that we can. and now that we have real competition, we better come up with something before it's too late. even if it fails, at least it will buy us some time to blow smoke up shareholders/analysts asses in order for us to sell some more shares. and then we can repeat the cycle with more smoke and mirrors with nova. can you believe that we've been able to live off of the dead carcass of the treo 600 since 2003? what a great country!

Shortage: Palms are hard to come by

oh, how times have changed -

Shortage: Palms are hard to come by

The Palm shortage, the company says, results from a combination of high seasonal demand and a shortage of LCD panels and flash memory, two critical components used to construct the devices. (The same shortages, as reported by ZDNet, are also affecting mobile phone handset vendors.)

ZDNet News found that Palm's Palm III and Palm V line of organisers are on back order or out of stock at Palm own Web store as well as other online resellers, such as Egghead.com. Brick and mortar retailers face similar problems.

Somsak called the shortage of devices a "pleasant problem," explaining the company prefers it to an overabundance of devices and no customers.

Dads and grads
"Everybody's having component problems. It's 'Dads and Grads' season right now ... and the devices are in high demand," she said. "Production has not slowed at all. Demands is out of balance (with supply) right now."

The tightness of supply of components is expected to continue for a few months, with some relief from the shortages expected in the company's June quarter, Somsak said.

As a result of the parts shortages, Palm has begun buying certain components in bulk, qualifying additional component suppliers and has also purchased some flash memory on the spot market, she said.

Palm partner Handspring, at least for now, seems to be unaffected. The company's Web store on Tuesday listed all of its models as being in stock and available to ship within three to seven days.