Palm OS fans on Verizon Wireless are, as of this writing, still having to make do with the aging Treo 700p. Both the Treo 755p and Centro remain no-shows on the Verizon network, despite persistent rumors to the contrary regarding the former. However, several hints have recently appeared to indicate that a Verizon 755p release is imminent. The earliest cause for optimism appeared back in September when a Verizon release roadmap was leaked. The documents indicated that the 755p's release date was to occur at some unspecified date in November. Just recently Verizon made a semi-announcement in October via a press release from that stated the 755p was indeed an upcoming device. However, no additional specifications, pricing information or release date was given at the time. 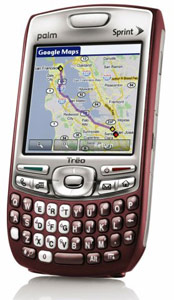 More recent events pointing to the 755p launch include numerous reports posted to PIC and TreoCentral with Verizon Wireless corporate sales staff now aware of the 755p as an upcoming device. I personally received several responses ranging from winter, soon, and late November or early December when I inquired at several local Verizon retail outlets. Both November 20th and sometime in 2008 have been tossed out as possible release dates based on information received from Verizon corporate store sales staff.

Adding fuel to the recent spate of rumors is the appearance of a new lime green battery cover on the Seidio online store for the extended-capacity 755p battery recently covered on PIC. Some users are speculating that the green color will be offered by Verizon (or possibly Telus) as a way to differentiate their versions of the 755p from the older Sprint blue and burgundy versions.

The EVDO Rev. 0 CDMA Treo 755p is Palms first antenna-less CDMA Palm OS Treo and has been available on Sprints network since May.

You never know with Verizon Wireless but....

Verizon has been releasing phones for 'pre-order' each of the last successive Tuesdays with the new phones available the following Thursday. The phones released so far have all been on the original "Verizon Product Release" which boy genius released to either Engadget or Phonescoop or perhaps even to PIC.

It is completely consistent for the 755P to be announced on the 20th ---- and I really hope so, 'cause suddenly my needs have changed and I have to migrate from my T|X to a smartphone and the 755p will fit the bill just fine and dandy.

The honorable thing would be for Palm/Verizon/Sprint to admit to the Keystone Cop-like series of misadventures which have left 700P owners clutching devices with severe problems either caused by the patches or caused by the fear of bricking their phones with the notorious patches. In admitting to their misadventure, they could "throw us a bone" in the form of a $100 upgrade to the 755P.

I have a year left on my contract and have had some of the common issues, but have held off on patching due to the horror stories. I had hoped that the Linux phone would be out and solid by the time I am up for a new phone, but I now doubt it. Given their past methodology, I have to suspect that when Google comes out with a Linux phone it will have an option to emulate the calendar and other familiar Palm apps and provide a conversion process. In the next 18 months I will go to a Linux phone one way or another. I'm fed up with the non-multitasking Palm Treos where the PDA does not work when the phone trumps the PDA because of marginal signal. Still - if Verizon threw me a $100 bone in the form of a 755P, I'd take it and I'd be more likely to stay the Treo course. Are you listening Palm?

I spoke with the manager at the local Verizon corporate store and he confirmed that the Treo 755P will be released on 11/21/07.

I'd love to know the final color and price point they settled on -and what kind of rebate(s) if any will be available -from Verizon and/or Palm.

At least I've had my new-every-two $100 discount for months and it's burning a hole in my pocket...

I dont think the Treo will be at verizon tommorow. This is getting really old.

I was at a Verizon Store earlier this week and they gave me a 755p product specification sheet. So the 755p release must be very close...
-Marko-