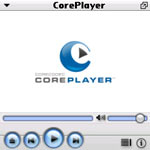 CorePlayer, the new and improved commercial successor to TCPMP, has been released for Palm OS devices today. CorePlayer is a advanced multimedia player that handles a wide variety of video formats.

This new version is compatible with a wide range of video formats including DivX, H.264, mpeg-4 and much more. The program also includes a MP3 and AAC audio player with support for album art and enhanced podcasts. It also includes new support for skins and streaming support.

Can someone who has this please let me know if it can stream Bloomberg radio? (PalmOS) (Link Below) With no trial period, I don't want to waste $20. I'll try to email developer too.

^^ Got the message: MMS protocol not supported!

Thanks for the bad news, freakout.

I just got my registration for it today. Be on the lookout for a review in the near future. It'll be more of an "initial impressions of 1.0" sort of thing but early impressions aren't looking too good. Grab TCMP while you still can!

All... we are working hard on CorePlayer Mobile for Palm as we have found a few bugs;

We will notify users of the new Palm version when we release it via email.

Thx for all your support and patience with this initial release!

I've noticed that videos that played as smoothly as a baby's bum in TCPMP now stop and stutter all over the place. It'll play a few frames, and then hold a still image on the screen while the audio continues. about 20 seconds later, it'll play another few frames, then seize up again.

Rather disappointing, considering the free one worked fine!

Oh, and also, the Settings ---> Advanced menu options are cut off by the scrollbar.

-Background audio.
-Shouldn't tapping a song in your playlist play the song?
-As Gekko noted, MMS streaming would be nice too.

I'll say this, though: it's a damn sight prettier than TCPMP. ;)

I got the same problems as Freakout mentioned. I am switching back to TCPMP until the bugs are worked out.

This is probably the idea behind no trial version, especially at this stage. Anyone trying out the trial would realize that this is not ready for prime-time and not purchase it. This way they get some money up front so they can continue working on it. Not a great buisness practice.
Of course, this is just my take on it and may or may not be correct.

I think Colormeweb is right. No demo is a tactic often used by devlopers (particular game developers & publishers) if they do not intend on updating their title or releasing any future bugfixes.

Occasionally you'll have someone cave in & eventually a very limited demo, like Namco/PalmGear did with their arcade ports of Pac-Man, Dig Dug etc. Anytime I see a title that does not offer a demo or trial version, I become VERY hesitant. I think I can count on two fingers the number of apps I've blindly bought without first having a trial or eval version.

CorePlayer is off to a very rocky start (missing Palm OS forums on their site, numerous delays & bugs etc). This isn't going to do anyone's perception of them, the fading Palm OS software market any good. Quite a shame after the great legacy of TCMP. I suppose this also strikes a blow for any hopes of Palm bundling a customized version of CorePlayer in future Treos.

Yeah, this is odd. I'd expect the pay one to be at least a a LITTLE better than TCPMP - which is excellent (except for all the missing codecs).

After being burned by so many Palm developers that DO release trials (but churn and burn their customers with ridiculous definitions of "upgrades") I'm getting very jaded about spending any more money on Palm software unless:

1) The utility of the program is exclusive and outstanding

2) The developer promises to be fair with definitions of "upgrades"

3) The price is reasonable in relation to my net wages.

4) The price bears some relation to reality compared to a comparable program and/or physical product (why does the Palm version of Monopoly - an infinite product - cost *twice* the price of an entire physical Monopoly board game - a finite product)?

Perhaps developers will follow the tact of the RIAA and blame any loss of sales on piracy rather than bad products or their own anti-customer policies. But from someone who's spent hundreds of dollars(and recommended thousands) on Palm software over the years - I'm less and less motivated to spend a dime on less-than-stellar stuff that requires continual payments as the developer gets the program fixed.

Here's a developer that "gets it" (and my money): http://ranosoft.net/ufug.html

No WMV support on Palm?

How come there's no support for WMV on the Palm version? Can the codec be moved from a Windows-device over to my Palm?

At least it's coming!

...now the important thing is: what kind of update/upgrade policy do they intend to offer? Will every added codec be a paid "upgrade"? Or will this be worth purchasing now?

Fantastic! Then there's finally a reason to buy it! I'm very, VERY pleased with my TCPMP so far!

Listen betaboy! Coreplayer can easily live upto its name - know what? Just bundle a dvd-movie files catalyst to Coreplayer with the expected bug fix updates plus wmv and it'll be the ultimate. Try my suggestion.
Afaebe.