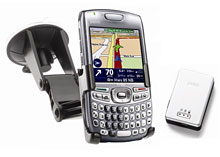 Palm has updated their online store listings with the newest addition to their line of superb GPS Navigator kits. Supporting the full line of both Palm OS and Windows Mobile Treos--650, 680, 700p, 700w, 700wx and 750, the new GPS Navigator SmartPhone Edition 3 package ships with an updated version of the TomTom Navigator 6 software, as the earlier 6.01 version reviewed here only supports the Treo 650, 700p, 700w and 700wx. This new bundle will presumably also ship with the latest 2006 TomTom maps reviewed here.

Palm provides few details of the new bundle other than the fact that it still ships with a pre-loaded 1gb miniSD card with a supplied adapter. Seeing as how the only Treo curernly supporting miniSD is the 750, this move might be a harbinger of allfuture Palm devices moving to the miniSD standard. Fortunately Palm is still providing a USB SD reader in the box along with the same accessory bundle as before. The Bluetooth GPS receiver appears unchanged as well.

On what planet is MiniSD better than SD. SD is already too damned small.

It all boils down to saving $

Full-size is already on the way out, as 2gb is the ceiling for conventional SD cards adhering to the official specs. SDHC is the replacement for full size SD 1.1 and with 8gb SDHC cards available for <$70 now, prices are dropping rapidly and 16gb cards are on the horizon.

Retreating to miniSD (and soon, probably, microSD) gives Palm another year of breathing room. 2gb miniSD cards are still relatively pricey and scarce, so that lets Palm get another round or two of Treos out without having to spend any $ on SDHC compliance (in the case of the WinMob Treos) and, in the case of the Palm OS Treos, hacking Garnet for >4gb volume support.

The Treo 680 "unofficially" supports SDHC cards but it has issues with 8gb cards as it sees them as two separate 4gb volumes on a single card. As far as Palm's support pages are concerned, 4gb SD 1.1 non-spec cards don't exist, nor do the 4gb and 8gb SDHC cards that work (mostly) fine on the 680 and with a hack on the 700p.

Palm will do whatever it takes to keep from having to invest ANY $ into R&D or cutting edge hardware. And unofficially supporting a card is different from testing and officially guaranteeing support for a different size or format.

Smothering the life out of the PDA line allowed them to retreat to the lesser spec'd Treos (no wi-fi, only 320x320 screens, 64mb RAM instead of 128mb, no internal storage volumes etc) and now regressing from fullsize SD/SDHC to miniSD lets them avoid having to deal with supporting cards larger than 4gb for a little while longer.

RE: It all boils down to saving $

I certainly hope it's not as severe as the picture you paint. I can't imagine it could possibly cost that much money to make the step from SD to SDHC.

That being said, I truly hope they don't make the change. It would definitely be a slap in the face to people who have invested in SD cards over the years. SD has become the de facto standard for handhelds, digital cameras, etc. Like the first poster said, I think the SD form factor is right at the point where any smaller isn't any better. Not to mention that the new SDHC cards are currently the only way to get significant storage for multimedia for your Palm

I'm not dead Yet.

"Oh, there's a special room over there with the one oddball and his Treo 180"

"A Treo 600. How quaint." The beutiful model turns to discuss the comming colored mini-sd cards with the tall Doctor.

I schlepp off to my "special room".

But it comes IN the phone:

RE: Blackberry just introed their own GPS package

Pardon, that was the wrong link (though also about that phone). Here's the PR release:

Well, just bought an Edition 2 last week at the low price, so I don't feel so bad.

Is there a rebate somewhere in the Ed 2 units?

Also, are there any forums that address the Palm GPS Navigator unit? The Palm Help forums have numerous posts with zero replies, so that is not a useful source of information. Varous TomTom forums don't appear to adress the Palm version either.

Your best bet is posting here. I and a few other PICers have the GPS 2 kit so we can at least give it a shot.

Hey Ryan--maybe that would be a thought--What if we set up a separate forum section for Palm GPS products since Palm are starting to take that segment pretty seriously?

When I select, on my Treo 700p, TomTom Plus Services, Check for updates, I get a response from TomTom's servers that 6.01 build 7630 is available via TomTom HOME.

But TomTom HOME says there are no updates and when I enter my Product Code on TomTom's maps upgrade site it says I have the latest maps version (which is a bummer, as it has old BigDig maps for Boston, while Garmin had new ones out a year back).

I called Tech Support and they didn't know what I was talking about, so passed my inquiry on to the Navigator Support Team (after a total of 55min on the phone) on Monday - it's Wednesday and no call back yet.

Any idea if I have the latest stuff? TomTom sure doesn't know or won't tell...