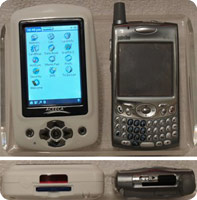 After months of delays, the long-awaited (for some) Aceeca PDA32 appears to finally be a reality. Tam Hanna of TamsPalm fame has already begun posting a detailed multi-part review of a pre-production version of the device.

Aside from a brief first impressions post, Tam's first area of coverage and second relates to that physical dimensions of the PDA32. There's simply no avoiding the fact that this is a very large, utilitarian device. Utilizing a variety of comparable tech gadgets new and old alike, Tam has given us a very good idea of the PDA32's girth. According to Tam, the Nokia N900 smartphone is the only device that even comes close to matching the PDA32's dimensions and it far outclasses it in hardware and software capabilities. Other devices often criticized for their size, such as the nearly six-year old Treo 650, still end being distressingly thinner than the PDA32. I was expecting a chunky device with a rather bland, staid appearance but was in no way prepared for the PDA32 to be so much fatter than any other Palm OS device!

It's how you use it

1. I think anyone still interested in reading about this sucker know by now that it's a ruggedized unit for a few very specific purposes.

2. No idea on the battery life. We don't have a review unit and Aceeca hasn't contacted us or send out any press info. And Tam certainly hasn't gotten around to finishing his review by now. I made a very general conjecture and gave the mAh figures of the two biggest stock batteries I could think of in past Palm OS handhelds. At this point, that's all anyone can do.

3. It's definitely a trip down memory lane and there are still some folks out there that need, can use, or actually want a brand-new Palm OS device that's not a leftover Centro. Just yesterday at work a service tech for the alarm company came out....he was carrying a Symbol Palm OS unit (probably running OS 3 or 4).

Agree. To look at the PDA32 as a consumer device is ludicrous.

This is a rugged, industrial device. It goes where other "girly man" devices like the Treo 650, Pre and iPhone dare not to go. You can almost drip kick this thing and it will keep on working.

Unless Tam has experience reviewing industrial devices like voltmeters and the like, I don't give his review much credence.

Well, that might be the case but until I see/read otherwise, Tam's review is the only game in town. In fact, his pics are the only evidence that we have that this thing exists at all!

Also, I think that some of the Aceeca peoples' earlier comments, posts, & emails suggested that this was a semi-consumer oriented device, as opposed to the completely industrial nature of their previous products. That might be where Tam was coming from. I know that I was sort of expecting a small production run type of semi-consumer device....like having an IBM XT PC in your home in the 80s as opposed to a Commodor, Apple, Tandy or similar.
Pilot 1000->Pilot 5000->PalmPilot Pro->IIIe->Vx->m505->T|T->T|T2->T|C->T|T3->T|T5->Zodiac 2->TX->Verizon Treo 700P->Verizon Treo 755p->Verizon Moto Droid + Verizon Palm Centro

You know I downloaded the Graffiti 1 to my Evo and was surprised to find that I could enter more dependably than from the standard android keyboard. The lack of spellcheck holds it back. If the phone could be modded so that I could use the Graffiti for finding names and Swype or something else for emails and such that would be perfect.
In short, I had always believed that the world involved magic: now I thought that perhaps it involved a magician.
- Chesterton

why put wagon wheels on a Ferrari?

That's a stretch Gekko! Ferrari earned their reputation and stands alone, kinda like Apple. EVO is just another android device (and they couldn't even be creative with the name, everyone knows it stands for extra virgin olive oil !)

Did G1 have spell check on Palm? G1 on the Vx were "the good old days" as far as Palm is concerned. I could see it being very useful on a phone O/S for simple tasks like finding contacts or names or even simple text messages.

Spell check?? I have a dictionary that I can refer to on my Palm. Graffiti is just one heck of a lot faster and accurate for me than all the virtual keyboards I've tried. Last good physical keyboard I've used is the Treo 700P. Gimme Graffiti for my Pre. Not going to happen as long as Access has control of Graffiti. Why would they help Palm after they passed on Cobalt. I figure there's bad blood there in that relationship. Oh well, I can use a wish to sustain me just as I believed in the tooth fairy and santa claus.
Have a nice day!
Pilot 1000->Pilot 5000->Pilot Pro->IIIe->IIIc->M500->M505->M515->TC->T3->T5->Treo 650P->Treo 700P->Droid>Pre Plus