Samsung is showing a Virtual laser keyboard running with a Palm Powered Smartphone at a trade show in Asia. 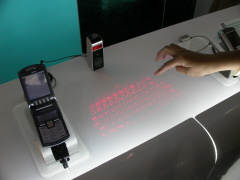 Samsung is currently demonstrating the technology at the ComminicAsia trade show. TelecomsKorea states that they plan to integrate the feature into mobile phones and PDA phone before the years end.

The Virtual laser keyboard on display was show in conjunction with the Samsung SPH-i500 Palm OS Smartphone. There is no definitive word from Samsung on when the technology will debut.

An american company, iBiz, also has a Vitual Laser Keyboard product due soon. The company is offering a $99 virtual keyboard accessory that will work with many current handhelds.

Thanks to Craig Bowers for the tip

;-(( @ 6/17/2004 11:33:06 PM #
Samsung should not be given even another word of press until they start shipping some REAL products. These jokers are Olympic-class vaporware-meisters. How about they team up with Panasonic and announce a new phone with a few new SD peripherals? An SD "personal massage device" should be tops on the list.

It's funny how big, bad Samsung got their arse handed to them by tiny Handspring in the smartphone market. I still can't believe we have no new Samsung PalmOS phones available in North America as of June 2004. Poor Sprint is stiil stuck with that ancient Samsung running PalmOS 4.

SONY ERICSSON P1000: bow down before its magnificence!

Glenman @ 6/18/2004 9:21:22 AM #
Sony Eric are committed to Symbian (well someone has to be) and last I read have no intention of switching or doubling up with Palm smartphones.

Dearest Frosty,
I know it pains you to accept the fact that you know nothing about Palms, but at least try to spare us from your ill-informed, ignorant comments. There is a reason why Palminfocenter's editor deletes every post relating to the SD Bluetooth driver fiasco. Even you must be wondering why there is no response to the demands of Palm users for a set of working drivers.

If Sony Ericsson does not have a PalmOS smartphone announced before the end of 2004 I will gladly admit here I was wrong. But when I am proved correct, hopefully you will finally (as they say in Madrid) S T F U.

But I, as the rest of the world, try to stick to facts.
I only see insults and hysteric bashing coming from you, not facts.

Anyway, as I already said 2 other times, of course I'll apologize if you were right. Just show proofs - or eat flaming death and go away. Pretty please.

Because I have also asked you what exactly has to happen for you to accept that you are NOT right, and I still have seen no answer.

All in one, please

If I am going to carry something around to type with, why not use a 5-row stowaway, and have full touch typing capability? Duh.

LiveFaith @ 6/18/2004 10:08:55 AM #
Turn down the lights or your keyboard goes away. I too like that monster power-supply / projector that it uses. Oughta come with a Batman accessory belt to carry it all.

dstrauss @ 6/18/2004 12:17:07 PM #
Look at thast contraption. How can it ever compete with a Stow-away keyboard. When (if) it's integrated into the top edge of the phone, give me a call; until then, just another gimmick from the King of Vaporware (yes, Samsung is even WORSE than M$oft when it comes to pre-announicng stuff - BY YEARS, not just months)

and this is Palm-related how???

Please stick to Palm-related stuff. Even if its boring software update announcements. This Samsung hooey is just that...

a. its connected to a Palm OS Smartphone in the article

b. its able to work with Palm OS devices

cervezas @ 6/18/2004 12:46:53 PM #
I looked at the Treo 600 and had no problem at all deciding that the Samsung i500 running "ancient" OS 4 was a much better smart phone for my use. As far as I'm concerned it's state of the art in every respect that makes a difference: it's a better phone than the Treo since it has a standard phone keypad, it's got a dedicated Graffiti area that accepts original Graffiti, and it is rock solid both physically and in terms of the software. I get great cell reception, flawless internet connectivity, and nary a crash. Furthermore, it's smaller flip phone style is more appealing and less of a target for theft than the Treo.

I'd like to have just a bit better one-handed control over applications using the hardware buttons, which is perhaps the one small area where the Treo outshines the i500 in my book.

If you don't want to wait for a new Palm OS smart phone from Samsung, I recommend going out and buying the best thing on the market right now: the SPH i500.