According to a post made to the official TeleNav forums by Gina, a TeleNav employee, version 5.0 of the TeleNav GPS Navigator has just been released for the Sprint version of the Palm Centro.

Some features of the app listed in the post are 3d maps and a favorites list that synchronizes with the MyTeleNav website. A full feature comparison matrix of the various versions of the app can be found here. Unfortunately, the rumored internal aGPS capabilities of the Centro have not been magically unlocked and the usual Bluetooth GPS receiver is still required. 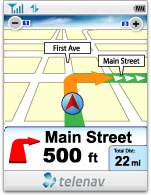 Unlike dedicated software-based "purchased" GPS solutions such as Mapopolis or TomTom Navigator that require hundreds of megabytes (if not several gigabytes) of local storage, TeleNav downloads its map data wirelessly over an available carrier wireless data plan. The service costs $9.99 as a monthly subscription or can be prepaid for $99 annually or $250 in advance for four years. All other Palm OS and Windows Mobile Treos, including the older 600 and 650, are supported by TeleNav.

When I upgraded to the Centro from the 650, I went ahead and put TeleNav on it, just to see what would happen. It worked great (I guess it thought I was using a 755p).

The 3-D maps are really great. All in all, a really nice application.