The Palm OS Cobalt Phones That Never Were

MobileRead's Bob Russell has posted a fascinating article that is certainly makes for interesting reading, what with the rumors and official statements from Palm their own in-house Linux-based OS will not be ready until early 2009. The debacle surrounding the flameout of Cobalt/OS 6.0 by PalmSouce after numerous missed deadlines and broken promises certainly makes for a cautionary tale for anyone thinking that a robust mobile OS is an easy thing to create.

In addition to the Cobalt editorial the article has three high-resolution product sheets from Singapore's Oswin Technology. The images showcase two Cobalt-based smartpohones that never saw the light of day even in their native Asian markets. While a bit chunky and unstylish by today's standards (especially the "Slide ID" flagship), the phones' specifications list is still impressive today, besting all of Palm's current offerings in several areas such as a large portrait 2.8" LCD and a 3 megapixel camera with flash along with hardware-assisted MPEG-4 encoding and decoding.

Both phones touted a Freescale imx21 CPU. Backwards compatibility on each device was assured by the presence of the PACE emulation layer and a full suite of PalmSource applications would have provided reasonable out-of-the-box multimedia and PIM functionality. While the spec sheets do not specify the exact version of the OS, these phones presumably would have shipped with the newer Cobalt 6.1 that added integrated telephony, Bluetooth, and Wi-Fi APIs. A 2005 copyright date at the bottom of the sheet along with the presence of USB 2.0 OTG also suggests the presence of Cobalt 6.1. 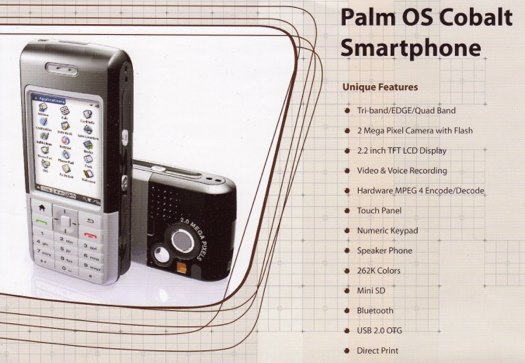 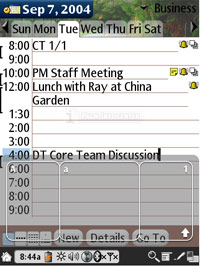 The first of the Owsin smartphones depicted in the MobileRead article looks suspiciously like an unnamed Oswin smartphone running Cobalt that we saw back in 2005. David Beers was able to spend some time with that particular device at the PalmSource DevCon back in May of 05 and he wrote this review piece for PIC about his hands-on time. The phone evaluated by Beers does appear like a restyled, sleeker version of the 240x320 candybar phone shown above.

With the release roadmap of new Palm OS Garnet devices looking bleaker than ever and the prospect of no new Palm OS II devices until at least early 2009, now is a good time to revisit those relatively halcyon days of 2003-2005, when PalmSources mythical Cobalt OS was rumored to be shipping soon on dozens of devices from a variety of licensees. Many users, myself included, were waiting with bated breath for a Cobalt-based successor to 2003s Tungsten T3 or 2004's Treo 650 to be launched at some point in 2004 -05. None of these devices, or even OS upgrades to existing devices, sadly, ever saw the light of day.

The remaining Palm OS faithful enter 2008 much like they have every year GSM Palm Centro is indeed the swan song for the tired OS 5.x that is now in its seventh year of service life.

What? My Dell X50p Works Great

Where have you all been? My X50p with Cobalt 6.1 is still going strong. The great thing is that Cobalt has nearly double the clipboard limit to 1928 bytes. Strong!

PS - Still wondering if Access is going to get a hotsync update for Vista?

I still love the look of cobalt. Too bad they couldn't have released a single PDA running cobalt.

I guess these guys had to succumb to the market on the OS. But, wow had they released and updated those phones, they could have made some waves.

Boy, Cobalt must have really been a dog because everybody was loading up early on. Sony just abandoned the market and the others dissapeared. Remember, the "13 devices by years end" quote by the CEO. Ugggggh.

"I still love the look of cobalt. Too bad they couldn't have released a single PDA running cobalt."

Agreed. I run a Cobalt skin on my T3. I even still had the Cobalt simulator running on my PC up until not long ago.

the iPhone that could have been

Cobalt wasn't perfect at the time but 4 years of improvement since would've gone a long way. I'm far less optimistic Palm will be able to salvage things with Palm Linux over the next couple of years.

RE: the iPhone that could have been

Exactly. I still maintain that it was not entirely Palm Sources fault (per se) that it tanked and it was not because it was a bad OS - it was more due to Palm (the hardware comopany) that killed it because by the time Palm Source delivered the OS, Sony was gone so Palm (or pa1mOne or whatever they were then) just said "Nope - we no longer need to spend 1 cent on research and development because the competion is gone". I think this theory is proven by Palms inability / unwillingness to do a innovate in the years that followed Cobalt's demise.

I spent time with it on the simulator and wrote some code using the APIs - I thought it was a great improvement over the old Palm OS from a development perspective.

Cynics like TVOR spent a lot of time on messageboards back then insulting the PalmSource people (as in, directly insulting individual employees that were willing to discuss the OS on forums) and claiming that the failure was the technology. Bull. I'd take Cobolt from 3 years ago ANYDAY over the cringe-inducing Windows Mobile 6, the supposedly more 'advanced OS' because it has full multitasking and has the word 'Windows' in the title, but is slow as a dog (still!), has an god-awful UI. Sadly I don't have the choice if I want a newer, 'thriving' OS - so I am now using and developing for the Blackberry OS.

It would be nice to have seen some sort of feature adding update for ANY of the palms i've owned. Palm really just took money and ran with it. For them to have a overall unchanged 7 year old os and not back-port something easily... grr.

waiting the new OSD you can download the update for treo 680 unlocked realeased today : http://www.palm.com/us/support/downloads/treo680update/unlockedgsm.html

Give out FREE COBALT!!

Some smart guy Out There will jigger a way we can put it on our PDAs.