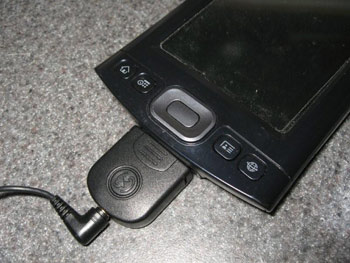 With the Palm TX approaching two years on the market and no new Palm PDAs on the horizon, Tech Center Labs brings us another delightfully innovative product to extend the functionality of Palms recent handhelds. TCL's new Palm Treo Headset Adapter module is a nifty little gadget that can conceivably prepare Palm PDA users for an eventual upgrade to a Treo smartphone. Additionally, owners of both Palm PDAs and Treos can use the module to share a single headset such as our recently-reviewed Palm Stereo Headset Pro between their devices.

Overview
The module is simply a go-between from a Palm PDAs multi-function Multi Connector port to a 2.5mm stereo headset seen on the Treo line and many other smart and feature phones that conform to the same pin spec as Palm uses for their Treos. A little-known fact of the Multi Connector standard is that in addition to stereo audio output, it supports audio input on several Palm devices that do not have onboard microphones; namely the Tungsten T5 and Palm TX.

Design & Construction
Tech Center Labs (aka Tale Stuff, aka Gary Mayhak) has uses the same basic housing for the Treo Headset Adapter as they do for their first-generation TX/T5 external microphone (reviewed here) and vibrate/microphone combination modules.

As usual, this is a simple and straightforward plug'n play installation with driver installation required. Build quality is solid, if unspectacular, and on par with the other TCL modules. Im of the personal opinion that the little 2.5mm jack on this module is likely to be more durable over the long haul than the much-maligned jack on the bottom of Palms Treo models!

Testing Methodology
I used the same Palm Stereo Headset Pro recently reviewed for the duration of this test as well as my usual assortment of TX recording programs (SoundRec and Personal Audio Recorder Pro). In the interest of brevity, a detailed review of the audio output and recording capabilities of the Palm Stereo Headset Pro can be found here. 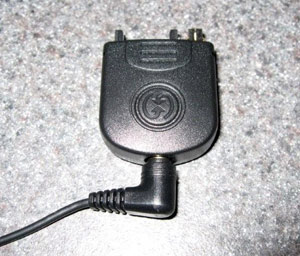 I only encountered a problem once where the sound continued to play through the TXs speaker instead of through the stereo headset. Simply removing and reseating the TCL module resolved the problem.

I noticed no discernible difference in audio quality while listening to a variety of high-bitrate MP3s with the Palm Stereo Headset Pro and PocketTunes Deluxe 4.03 on my TX with this adapter or when plugged directly into my Treo 700p. The sound quality of the Palm Headset Pro remained as uninspiring as ever but this is of course no fault of the TCL modules design. I also found all microphone and recording tests with SoundRec and PAR Pro 3.3 unaffected by the presence of the adapter. The module operates seamlessly with no conflicts with any of my TXs OS functions or 3rd party software.

Music aficionados will naturally prefer to go with their devices standard 3.5mm stereo jack for high-quality headphone usage. Then, if desired, they can add one of TCLs stand-alone microphone modules (ideally the TCL mini bud mic) attached to the Multi Connector for audio capture purposes.

TCL maintains a list of useful links to a number freeware VOIP, voice command and sound recording applications on their website. I was unaware of the existence of several of the apps listed, so its definitely worth checking into since the Palm TX and T5 do not include any bundled voice recorder, voice command or VOIP software. Time constraints (what else is new?!) prevented me from really delving into VOIP on my TX but this is definitely something Id like to play with in the future as I feel it could really be a killer app for wi-fi-enabled Palm PDAs and this adapter would provide the TX with perfect functionality for such usage.

Compatibility & Availability
The TCL Treo Headset Adapter a standard Palm Athena/Multi Connector interface and works only on the Palm TX and T5. The Tungsten E2, being a lower-priced model, does not have the required DSP onboard for audio capture. It is available now for $17.95 + shipping direct from TCL (check for availability).

Conclusion
This is first and foremost still a niche or specialty accessory for a certain type of PDA user and TCL makes no pretentions about mass-market appeal for these cool little gadgets. That said, for VOIP and dictation functionality, this adapter is hard to beat given its ability to consolidate both stereo sound output and audio input in a single headset.

Gary refers to it on his site as the "TX adapter for Treo 2.5mm Stereo hands-free headsets." So I changed the title to make it more clear, thanks.

I am going to try this device with my Treo 680 as a way to reduce the wear and tear on the audio jack.

Sounds silly, but I like the idea of using it on a 680. My first 680 got locked in headset mode after I inserted a stereo headset in the little jack. I've been too afraid to stick anything in that hole with my replacement unit - can't afford to lose another week waiting for a return.

Thanks for the great review Kris!
I think it has generated a lot of interest, my allotted web page traffic has been exceeded so EarthLink has shut me down for the rest of September!
Most of our products are available in our ebay store... http://stores.ebay.com/Tech-Center-Labs

I'm sure Kris meant to say 'with NO driver installation required'.

OF COURSE I DID!