Ok, Ill admit--my geek quotient is high enough that Id want to travel with something like Palms fantastic GPS Navigator kit. But its not high enough to want to ruin my dashboard with a permanently installed cradle or a messy but flimsy adhesive-backed mount. In the past I just would use my cars cup holder as the general hold-all for all loose items, electronics included. When I travel and use a rental car I generally bring along my GPS receiver, a cordless radar detector and the omnipresent cell phone/Treo. 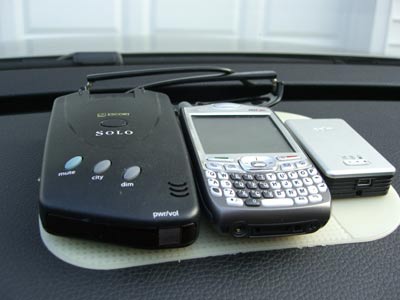 One day about three years ago while I making a very innocent trip to a local auto parts store I noticed a nifty counter display promoting Handstands sticky pad. I was initially attracted to the name (it conjured up suggestions of Handspring) and the price was right so I bought a black StickyPad on a whim. Over the past few years HandStands has released several evolutionary updates to the original design and Ive loyally purchased the latest style each time. Ive now evaluated all of Handstands offerings, currently encompassing four different sizes of pads. Read on for the pros and the cons of my second most indispensable travel accessory (Palm travel charger being the most important!)

Original StickyPad
Clad in black, this was my introduction to the wonderful world of StickyPads. Out of the box performance was excellent and I immediately bought several more for friends, family, and coworkers as gifts (yes, Im cheap). The Sticky Pad leaves no residue on the cars dash, doesnt leave any gunk on your devices, and can be rolled up and washed ad infinitum. This sure beats the nasty suction cups and Velcro pads I used to use to keep my radar detector at bay!

Unfortunately, after a few months, my Pad began to curl up on its edges (maybe its the heat here in the South?) and lose its adhesiveness. I followed the instructions on the packaging and washed it in warm, soapy water to restore some of its stickiness. It improved slightly but never truly returned to its factory-fresh form. I also noticed that the Pad was a magnet for lint and hair whenever I renewed its stickiness. So I had a serviceable automotive solution but it wasnt flawless. While this was a very positive introduction to the world of StickyPads and I continued to use the black pad in my car daily, I was hoping that a revised version would eventually come along (one did).

StickyPad Jelly
I purchased this 2nd generation design at CompUSA about two years ago. Upon first glance I know that was the improvement I had been awaiting! I bought the red version (or, as Handstands prefers to call it, Cranberry) by default since it was the only color remaining in stock. Black and blue are the other available color choices. I was immediately impressed by the improved tactile feel to the pad upon removing it from its packaging. The pad is considerably thicker and a bit heavier than the original StickyPad so curling edges have not been a problem at all. In tens of thousands of driving miles I have never had my phone, radar detector, mp3 player or sunglasses slide off of the pad unless I had to make an emergency maneuver or a sudden stop. After a year of use, I bought two more Jelly pads, both in black, and positioned them side-by-side on my dash because I wanted to make room for a GPS receiver. While crowded, this served me well until I saw 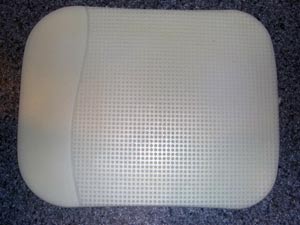 I got this monster sized Pad at Best Buy a few months ago on clearance. Obviously HandStands missed the memo from Cupertino that Nano black is the new white! This Pad began life as a lovely alabaster white but has since faded and yellowed from UV exposure. It now looks like a yellowed almond/vanilla color, made all the worse by the contrast provided by my cars black dashboard. Ugh. I miss my old black and cranberry Jelly colors!

While the disappointing aesthetics are a major letdown, this is still the best execution of the classic StickyPad yet. Despite the increased size It fits perfectly on ever dash Ive ever used it on. The XL also has a notably smooth and grippy underside. My current arrangement of a Treo 700P, radar detector, sunglasses and Palm GPS receiver fits nicely on the XL with a bit of careful positioning. If the XL just came in a color other than white it would garner a perfect 5/5 rating. This one is my personal recommendation for anyone who has more than a single item to fit on top of their dash.

NOTE: Do not confuse this latest iStickyPad XL with the older, far inferior Super Size Sticky Pad that comes in black. The older SSSP is based on the inferior original StickyPad design mentioned above and its not nearly as large or as heavy as the white-only XL variant.

Conclusion
One of the best bang for the buck accessories Ive ever purchased. While PIC readers who dont spend much time in their cars may not find much value in these StickyPads, any fellow road warrior who has logged many miles while swapping rental cars can appreciate having a reliable spot to store stuff. The StickyPad is a durable, attractively priced impulse purchase that I recommend to nearly everyone who rides in my car. In the truest test of its usefulness, a StickyPad becomes more indispensable the longer its part of ones daily routine.

Do the later iterations of the StickyPad have the same issues with lint and dust and hair sticking to the surface as the original one you commented on? I can see one of these being useful in my MX-5 Miata but, no roof = much more crap floating in.

And a question you can't answer -- why have the marketing braniacs stuck a lower case 'i' in front of the name now... has the World gone iMad?

Wow, it's a small world. My wife bought me one of the black ones about 3 months ago. I thot it was a little silly, but put it in my new Ridgeline anyway. I can't live without this thing now!

Putting my Treo on the dash is safe and sound and works perfectly with a bluetooth headset, allowing a stable place and good positioning for the Treo's traditionally weak signal.

When lint and dust attach to it, I just wash it in water and viola it's like new. When dust accumulates, the Treo and headset can slide off in hard braking or cornering. The only real problem is the curling edges. Mine began to do that from the moment I attached it. Maybe "Armor All" on the dash caused it.

Your review gives me the itch to find one without the curlies. This is a highly recommended accessory IMO.

man I love those things. I have the StickyPad Jelly and at first I never thought they worked, but I bought one since it was $8 lol. Now, I can't live without it...and I gotta go run to CompUSA and buy somemore for the other car.

I put my iPod on it since I already have a tape adapter, and the iPod never moves.

----------
Senior Editor, Webmaster, and host of podcast at www.palmforums.org

GM Fude; thanks for the compliment-glad you enjoyed it. No, the Jelly & the iSticky XL do not have the lint/hair problem. I've ridden the dog in the car and it hasn't posed a problem at all. The bottom of the newer 'Pads is strangely...smooth and moist compared to the original thin Sticky Pad.

About the only problems I can forsee in a Miata would be the sun drying the pad out (you might want to wash/soak it monthly) and possibly causing its color to fade. I've noticed my white XL turns the previously mentioned "dirty milk" color and the Cranberry Jelly pad is a much lighter pinkish color--but that's after a LOT of time in direct sunlight here in the South! I wouldn't worry about it.

Pat;
The ArmorAll DEFINITELY did is the culprit! So you have the "thin" original StickyPad, huh? I definitely recommend an upgrade to one of the newer designs/compositions. No more curling edges!