I've put together a 5 minute video demo on the Palm OS Garnet VM running on a Nokia N800 Internet Tablet. In the video I walkthrough setting up and launching Palm OS apps in the Garnet VM, show of the various setting and options and of course demonstrate classic Palm OS and third party applications running on the Nokia Tablet.

Read on for the video clip as well as some live shots of the VM in action. 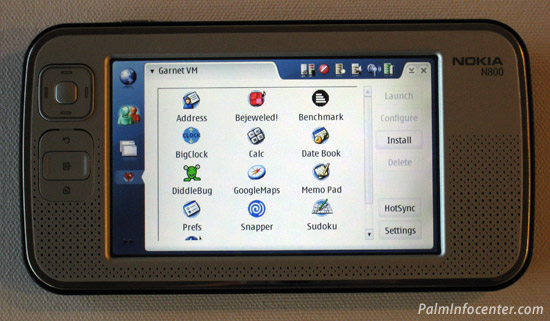 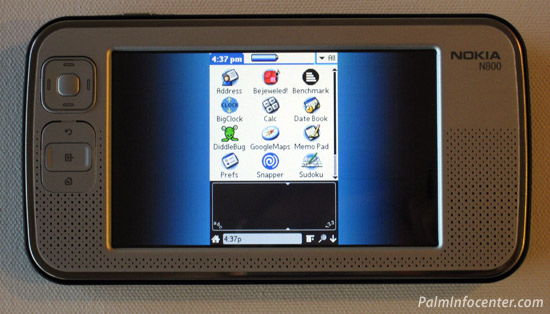 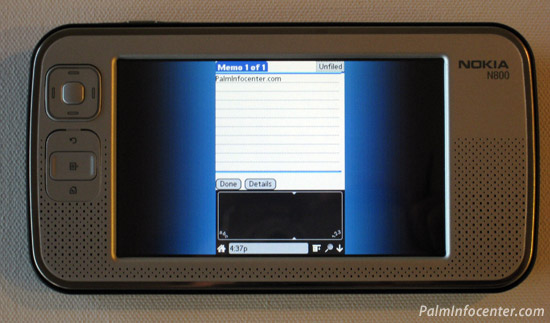 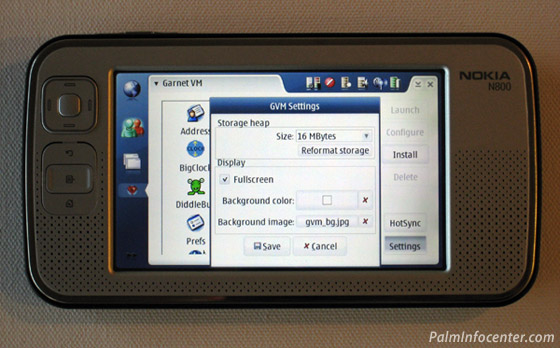 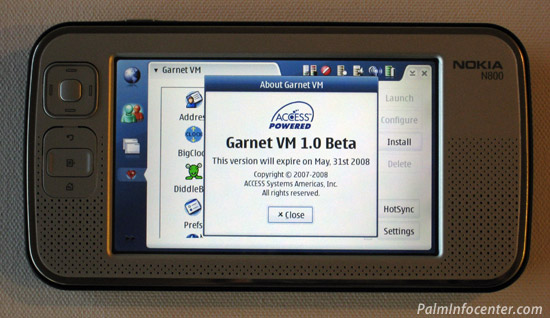 Finally, there is something to look forward to for palm os. I thought it is already in its course to a natural death.

Great video Ryan. Thanks.
Any idea about the use of "hack" type apps and DA's? I'd really like to see if CKJOS and Chinese character recognition software works. Nokia just might make another sale if that kind of stuff is possible. It'd give me a way out of this current "dilemma" without having to dump everything at once.

This kind of stuff is actually giving me some hope I haven't had in a while.

Unfortunately the Youtube conversion process makes the display almost illegible. I'm trying to get a higher quality upload to work on google video so that the clearer native resolution of the video display and you can view the screen better.

That isn't exactly YouTube's fault, it's Access's fault for not putting the resolution in full screen and only operating in a window. Hopefully this is fixed in the GM release.

Also, is the N800 REALLY that unresponsive? A few times, you would touch a menu button, and the thing would just sit there as you tapped three or four times, until it finally woke up and registered all taps. Looks frustrating.

I'm glad something like this is available, and for free. The next step is to get this running on Windows Mobile.

Running the Garnet VM is a 480x320 window simply makes sense. The N800 screen is 480x800, so scaling the "standard" Garnet screen out to full screen on the N800 would probably create not just a few problems. (My mind drifts back to my Handera 330 with it's 320x240 screen and the "unique" complications that caused.)

The bottom line is that Garnet is truly a dead end OS. Nobody, Palm included, is building their future on it. It is simply being "supported" in the ALP OS, and now in the Nokia internet tablets, and supposedly in Palm's next Linux based OS. But it isn't as if anyone is moving "toward" Garnet, and I don't expect that Access is spending too much time trying to enhance Garnet beyond what it was when they bought PalmSource. Still, I readily admit that I can't see a lot of purpose in Access releasing this Garnet VM for Nokia. Anyone?

As best I can remember, Styletap still doesn't support Hotsync, right? Otherwise, seems like that is a realistic option for WinMob users who still want/need to run some Palm apps.

But it isn't as if anyone is moving "toward" Garnet....

We recently portrayed Palm OS development as dead, only to be lambasted by StyleTap, creators of the Palm OS emulator for Windows Mobile. According to StyleTap their emulator isn't just used for running legacy applications, but is enabling the development of new apps as well as improvements to old ones, by companies and programmers who like the platform.

Thanks for the video. The N800 looks so much better today.

I'm really impressed by the speed of the emulator. Anyone who has a little experience with palm development emulators, knows how excruciatingly slow they are. However the responsiveness appears to be really good, as in the case of google app. Applications seem to take a while to load, but anyone who has lived with NVFS won't mind.

Access has an interesting thing here. Especially if they plan to move it to other arm-nix devices ... maybe the idevice .... :-)~~~

You are forgetting that you are looking at a demo WITHOUT the gobs of DB records a real PDA would contain. There is no way in hell I'm going to try to move over my 8MB+ of Memos to test out the VM's real-life speed. (For one thing, I'm not even sure if it could *read* the LifeDrive's Memos format now, after Palm extended the Memo size; same for Calendar data, etc...)

Well, you may be right and more testing needs to be done.

However I don't see this as a replacement for PIM, but rather a stopgap measure to avoid missing those old palm application that are still around and have no replacement on the target device. I have a couple myself (with big db's too). For that, it's a good solution.

The nokia still misses decent calendar / todo / memo functionality and the emulator is not going to fill the void. However the TX (and the rest of Palm's offering) has become so bad at "doing the internets" that resisting to the urge of change is almost impossible :-)

You are too kind. Sentence Revisionizer switched on:

>>>However the TX (and the rest of Palm's offering) ha[ve] become so bad.

There. Better. Fat-free, yet true.

I just happened across this and first - BIG thank you for the informative video. Second I agree with the comment maybe there is hope after all. Been using palm devices since long before they were integrated with a phone and it is agonizing to see them give up the lead and slide behind the competition! But I have the system and software syncing reliably with the computer  tons of books pictures music and videos all working smoothly and DO NOT want to have to learn use a new system. I stood in line with all the kids and got one of the first iPhones  and was the first to return it. Live the phone but could not do with losing the software on my 650/computer! Been hoping my 650 will last until Verizon gets off their butt and makes the 755P available (any day now  just wait  its next week  well sometime anyway)

Nokia is looking good to me right now!

So abasco please let us know how well the emulation works when you have all the apps and files loaded will you?

I may have to buy one.

It seems like it might not take too much programming power to map the image onto the full screen. You wouldn't get better resolution, but you would get a bigger picture. My eyes are 40 years old after all!