In yet another tightening of the PDA belt, Garmin has quietly posted a notice of discontinuation on their website of two of their four Palm OS GPS-PDA hybrid handhelds. One of the companys Windows Mobile-powered handhelds, the iQue M5 running WinMob 2003SE, is also discontinued. Garmin has not issued an official announcement short of adding the models to its discontinued product list and putting up a discontinued sign on its product pages. 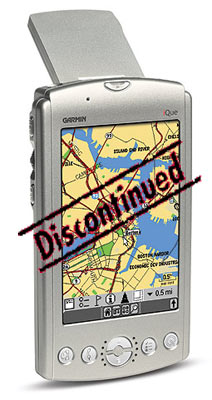 The Garmin iQue 3600 was released in July of 2003 amidst much hoopla. It was the first 320x480 non-Sony Palm OS device released and beat Palms own Tungsten T3 to market by several months. The iQue also had the notable distinction of being the only non-Palm device to use the Universal Connector accessory connector. Unfortunately this connector design was on its last legs for Palm by the time of the iQues introduction.

The second discontinued Palm OS model, the iQue 3200, was released approximately one year later as a reduced-feature budget version of the 3600. The 3200 had a 320x320 LCD in place of the large 320x480 of its older stablemate. The 3200 also omitted the headphone jack, mp3 player, voice recorder app, and microphone from the 3600s design. It did, however, improve the 3600s SD-only limitation by offering an SDIO slot.

A slightly modified version of the 3600 is still in production. It is the0 iQue 3600a, intended for aviation purposes and in-flight usage. The iQue 3600a is still a current product, if the information on Garmins website is correct. This highly specialized model was introduced in early 2005 and has a unique cradle mount and software bundle. It also boasts main memory expanded to 64mb while touting 96mb of pre-loaded ROM data.

The newest addition to Garmins line of Palm OS GPS-enabled handhelds is the iQue 3000, a restyled, smaller, lower-cost version of the iQue 3200. The iQue 3000 was announced in early 2006 but delayed several times before its eventual arrival to the market. This handheld is listed as a current model by Garmin and still enjoys widespread availability.

I almost got one.

I was very tempted to buy one of these. They were cheap at my brick and mortar store. But the processor is only 200mhz so I didn't want to go for it. If it was faster like 312mhz I would have gotten it.

These are very snappy in my experience. That's the silver lining of lacking non-volatile RAM: it's the good/bad ol' days where all your data is always in RAM.

Too bad - they were decent units and quite snappy (even licensed the Palm "universal" connector of the day), but probably ahead of their time. Battery life was not so great, and people comparing processors would balk nowadays. I'm pretty sure they also had non-upgradeable firmware but could be wrong on this.

Although Garmin started building PPC versions of these to mollify the Windoze contingent, they're really in a dead sector because of battery life. The dedicated GPS's are better, cheaper and allow for the handheld to be free for it's other functions. And the Bluetooth GPS units are extremely cheap and better now, combine them with Tom-Tom in your favorite PDA/Smartphone hardware and it's hard to justify the iQue's older hardware and price.

One less competitor to force Palm to innovate is the real tragedy here.

Garmin is still producing the 3000 and 3600A devices. The 3600A is a more-expensive version of the 3600 that's certified for use in airplanes and comes with a special plane-mounted cradle for in-flight use.

It could be a chip availability issue -- the older 3600 and 3200 devices used older versions of Freescale's MX chips, and they may be end-of-lifed. The 3000 uses a newer MX chip, IIRC.

They're all dead. DEAD.

Sony - Sonny-Boy left in disgust (has anyboby seen the lost sheep, Cobalt?)
Tapwave - tapped out
Fossil - sunk into the tar pit after a comedy of errors
HandEra - squeezed out by Palm/PalmSource greed + told to "Talk to the HAND"
HuneTec - Who Tec?
Kyocera - Left YEARS ago - Sayonara YKyocera
Samsung - swansong was 3 YEARS ago; PalmOS plans killed by failure to deliver products to Sprint in a timely manner
Handspring - staggering near bankruptcy, forced to give HANDjob to Palm
AlphaSmart - went the way of the dumb dodo
Garmin - can no longer be located
Legend - never happened
Symbol - signs indicate they actually more or less checked out 2 years ago
Acer - Bwahahahah! This company was a Joker

Aceeca - oh dear, the future of PalmOS rests in a sickos hands
Palm - since they will soon move most models to Windows Mobile looks like Palm's giving Access the finger
GSL - PalmOS gave them a GSW.
LG - Hell. Gee. W T F?

RE: They're all dead. DEAD.

Actually Garmin still has two Palm OS iQues, one regular and one for pilots. AlphaSmart still sells the Dana Wireless. Janam takes Symbol's place, they even have colour and more than 33 MHz ;)

I don't think Palm is going all Windows Mobile, thus Treo 680. Also Palm PDAs will have the current lineup, until ALP (or Palm Linux-based OS?) is ready; announcing now the transition might have Osbourne-like consequenses.