The Missing Sync for Windows Mobile is the only Mac sync product that supports Windows Mobile 5 devices, including HP iPAQs, the Palm Treo 700w/wx, the HTC TyTN, Motorola Q, the new T-Mobile Dash and many others. The Missing Sync also supports devices running Windows Mobile 2002 and 2003, allowing Mac users with any of these products to connect and synchronize personal information, such as contacts, calendar events, tasks and notes.

One of the most asked-for features in version 3.0 is synchronization of notes. Since Mac OS X doesn't include a full-featured application for creating, categorizing and searching through notes, The Missing Sync includes Mark/Space Notebook, a powerful helper program, for free. Mark/Space Notebook includes notes categorization, Spotlight searching, support for pictures and even voice memo syncing. Notes can also be synchronized with Microsoft Entourage 2004.

Also new in The Missing Sync for Windows Mobile v3.0 is file and folder synchronization, which lets users setup folders and files to keep in sync between their Mac and mobile device. Imagine sharing important Word and Excel files with your Pocket PC device; editing them on the go; then having them update on your Mac and Pocket PC automatically, all with the touch of a button. With this functionality, the Missing Sync essentially provides a digital briefcase capability for mobile device users. 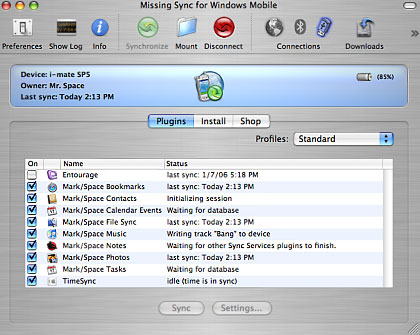 To leverage the multimedia capabilities of Windows Mobile devices, this update introduces plugins that synchronize directly with iPhoto and iTunes. Users select iPhoto albums to send to the device, and The Missing Sync automatically resizes them for optimal viewing and downloads them to the device. Photos from camera-enabled devices can be imported directly into an iPhoto album or into a folder on the Mac. Similarly, selected iTunes playlists can be downloaded to the device. While Windows Mobile devices can't play protected AAC audio files, such as those purchased from the iTunes Music Store, they will play podcasts and unprotected music, so users will always have something available for listening.

"With this update to The Missing Sync for Windows Mobile, we focused on delivering new features to users, while keeping pace with the latest innovations and rapid delivery of cutting edge devices from vendors such as HP and HTC," said Brian Hall, Mark/Space president and CEO. "From notes and file syncing to much-improved iPhoto integration, there's something in version 3.0 for everyone. Windows Mobile devices are capable of so many things, and The Missing Sync gives Mac users easy access to those powerful capabilities."

Looking at just how nice this version of Missing Sync is, I'm thinking we need a Windows version, as this has several advantages over ActiveSync.

I know, I know....probably never happen, but I can dream.