I love watching movies and I love my various Palm devices.  Sometime, when I'm watching a movie that's a bit slow to deliver the action, or when I am casually rewatching an old favorite, I whip out my TX or Treo and combine two of my favorite leisure activities.  Landware's long-running Leonard Maltin Movie Guide has recently been updated and revised for 2007.  Couch potatoes, the missing link has now arrived!  Read on to see how Landware has managed to blur the lines between the silver screen and the 2.5" LCD screen.

Leonard Maltin Movie Guide 2007 adds improved one-handed support and a revised UI, the ability to import/export movie lists to your PC, and a "back" button for easier searching. In addition over 460 new films have been added.  Support for newer Palm OS devices has also been improved.

Testing Methodology & Results
I gathered together a selection of some personal favorite flicks to run through LMMG 2007: A few all-time Hollywood classic (Casablanca, 2001: A Space Odyssey), a cult classic with mainstream appeal (Office Space), a foreign film with a big-budget American remake (Insomnia), AN underappreciated cult classic (Liquid Sky), and some recent Hollywood blockbusters with a string of predecessors (King Kong, Poseidon). I was delighted to see that all of the films listed above were present and accounted for aside form the most recent (2006s Poseidon starring Kurt Russell and its low budget, made-for-TV 2005 remake). However, the original 1972 Poseidon Adventure was listed and the capsule review even listed the films mostly overlooked sequel. Leonard Maltins reviews were usually quite on point and do a nice job of summarizing the general consensus of a film in very limited space.

A capsule review was available for all of the titles listed above. All of the movies filmed in widescreen even have information listed such as aspect ratio and widescreen format (Panavision/Technovision/Super 35 etc). However, I noticed many smaller and/or older films that are in some sort of widescreen format not indicated in LMMG 2007. The apps Academy Award info (for the pertinent titles) is thorough and mostly complete. However, I did notice a huge bug in the listing of 2000s Russel Crowe feature, Gladiator. LMMG 2007 incorrectly lists 1992s Gladiator (a boxing film starring Cuba Gooding Jr.) as the recipient of all of the Ridley Scott-director Gladiators Academy Awards. Whoops! 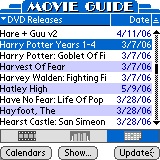 For this app Landware installs their usual Windows installer that, while potentially aggravating some power users, proves to be a boon to novice handheld users. The Landware installer automates the LMMG 2007 Hotsync process and queries the user on internal memory or external card utilization. Additionally, the Landware desktop components have an auto-update checker, a PDF users manual and an option to reinstall the application.

Conclusion
Landware has done an amazing job continually refining and updating this classic mobile app.  While more detailed information is available on Wikipedia or IMDB, it's a tedious chore to hunt it down. In the next version Id love to see a bit more technical detail for each film as well as a list of similar titles (If you love _____ then check out _____) and maybe an option to connect to a mobile-formatted web site to pull up additional info such as full cast listings or screen captures. Still, this app is simply a must-have for the mobile movie buff!

How does it compare to VideoHound?


It's all too amazing for words

RE: How does it compare to VideoHound?

I like VideoHound much better. VideoHound has around 28,000 movies and LM has 22,000. Plus the VideoHound reviews are more complete and have tons more data like cinematographer, composer, etc. Some of the Leonard Maltin "reviews" are like two sentance reviews.

The pain of VideoHound is that it doesn't have any kind of automatic HotSync updating. You have to manually download every new zip file. You have to go to the PocketSensei website to get the monthly updates and to make it worse they don't seem to advertise when the updates occur, though I've found they seem to occur around the first week of every month.

But aside from that pain, I find the VH way better.

My laptop's hard drive went kerflooey, along with my archive of software license numbers for my Palm apps that I've bought. Then, my Treo decided to forget all my registration numbers for the programs I use. Bummer. Should be a minor annoyance, just email the companies and get the license numbers again, right?

Mostly right. With Landware? Wrong. Went back and forth with a progressively-more-rude support person who didn't have a record of my last two upgrades of Pocket Quicken. Won't give me the license number for the version they DO have a record of me purchasing. So, basically, I either pay them again (full retail) or I'm out of luck.

Sorry, Landware. Not gonna get another nickel from me.

I won't comment on the Landware service, but dude, you've got to keep you registration codes backed up. Is the handheld your one and only copy? That's just dumb.

People need to understand that computers (including Treos) need to be backed up. I bet you have baby pictures on your home computer that you haven't backed up. Every person, pro or home user, needs to keep important data in two or even three independent locations.

When your hard drive crashes (it eventually will) are you going to blame, DELL or Seagate or Microsoft? Always Always Always backup.

I have to admit that it IS harder to get in the ol' dock/charge/sync habit when you are a Treo user (vs a conventional Palm handheld user).

With Internet anywhere on the Treo it's a lot easier to skip or just forget about the frequent Hotsyncs. Before I would sync 2x daily just to get the AvantGo updates on my OS 4 & Tungsten era devices!

See, that was the problem. My primary storage and backup storage both died within about a week of each other. Terrifically bad luck, but nevertheless: I paid these jokers upwards of $70, and they won't even give me the code that they ADMIT I purchased.

Heck, this was the first time I'd ever lost data on my Treo. Despite other folks' horror stories, mine has been pretty bulletproof for over a year. Go figure.

I've never had a single problem getting a vendor to re-send me a registration code. I had no reason to suspect that I'd have a problem this time. I am now enlightened, and hopefully I can save somebody else the headache.

>Won't give me the license number for the version they DO have a record of me purchasing.

Hey Moofie, if we have a record of you purchasing the maltin guide then we would have issued you a code no questions asked. I'm not sure what the background is, however if you wanted to email me your details directly I will get it sorted for you.

ok I should learn how to read. You are talking about PQ.

If you are the Lee Gibson from Plano Texas we have no record of you purchasing the app from us. According to the notes at this end we are waiting on proof of purchase or a reg cad from you.

To be honest I find it astonishing that one of our support people would basically say "Yes I see you are registered, I see your registration code but no I'm not going to give it to you."

In any case why don't you contact me and I will help you directly.

Very good news on this front. Clinton got me all sorted out, and I am again a happy customer. I hate to be the squeaky wheel, but I am very glad this has been resolved.