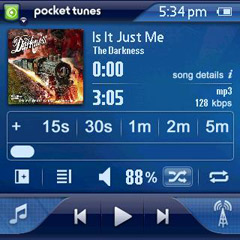 When Pocket Tunes 4 arrived on the scene back in December 06, one of the most welcome additions was the new Sleek UI. In our review, I called it a welcome and much-needed improvement over the cluttered and, well, ugly High Fidelity interface of pTunes 3. Based on customer feedback, Normsoft and Gx5 have further refined Sleek in the months since, claiming to improve the listening experience.

My, What a Big Playlist You Have

The original Sleek UI succeeded largely because it managed to fit a lot of controls and info onto the screen without making things feel cluttered. Thats no small accomplishment, considering the Treos limited screen real-estate. But there was a price for doing so: a limited playlist view and an eye-strainingly small album thumbnail. Sleek Enhanced seeks to rectify this by giving us three separate views, which are toggled by two small touchscreen buttons above the playback controls. For lack of official titles, Ive named them Navigation, Playlist, and Album Art. Imaginative, eh?

Navigation is the default view, and where most of the changes have occurred. The first thing youll notice is the new Jump Bar, which allows you to skip around your audio in precise increments. Its especially handy for audio books and longer music tracks, where the position slider can be somewhat hit-and-miss. But although its useful (and big enough to be thumb-friendly), it looks cluttered and detracts from Sleeks overall visual appeal. Whether you appreciate its addition or not will depend on how often you use it. 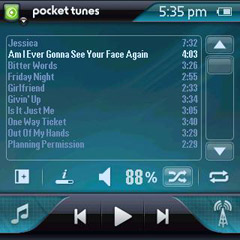 The track information area has been slightly rejigged: album art is now much larger, the artist name area has been shrunk slightly, and file type & bitrate info make a comeback after a brief sabbatical.

Playlist view is fairly self-explanatory. In our original review, I noted:

It's unfortunate that you can't tap or drag the playlist scrollbar; it can be difficult to accurately hit the up/down buttons without the aid of the stylus. It also would have been nice for those of us with 320x320 devices to have the option to expand the playlist view to fill the screen.

Im happy to say that these niggles have been erm, de-niggled. The up/down buttons are bigger and much more thumb-friendly, and the playlist now fits 11 songs comfortably. In their place, however, I have a new qualm: you no longer have at-a-glance access to your playlist. Its either a page full of playlist or no playlist at all.

Album Art view basically takes the track information area from Navigation and blows it up to fill the screen, sans the bitrate and file type. On this view, the album art will look more like the CD case you have on your shelf, and less like a nondescript puddle of pixel vomit.

Universal to all three views are the new, larger Volume, Shuffle and Repeat buttons. In order to make room for the View buttons, the volume slider graphic has been dropped and now just displays a percentage.

I Take It All Back 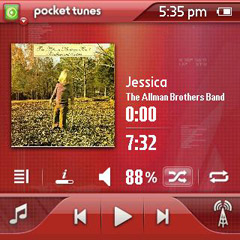 Im torn. The Sleek (Enhanced) UI takes a frustrating two steps forward and one step back. On the one hand, complaints that the original Sleek had been too simplified have been knocked for six; theres now even more information at your thumbtips. But on the other, these enhancements have actually detracted from Sleeks original appeal: lack of clutter. (I suppose youd call that spartan.) Whether that matters to you will come down to personal taste, but this reviewer will be sticking with the original.

Sleek (Enhanced) is available as a free download from Normsofts website. It comes in Blue, Green and Crimson varieties. Pocket Tunes 4 is available from the PIC Software Store in Deluxe and Basic versions for $37.95 and $19.95, respectively. There is a free trial available.

I've been using the sleek-enhanced since it first came out and it (like almost all of g5x's UIs) is an awesome interface and, in many ways, a great improvement over the regular sleek skin.

However, this comes at the expense of 5-way nav. Where, in the old sleek version, the 5-way could be used in the standard Treo method to move around the UI and choose songs from the playlist, toggle repeat or shuffle, and do other typical nav tasks. The new "enhanced" version, however, has relegated the 5-way to an iPod like control, where volume, skip, etc. are the only tasks it can perform.

NormSoft was excellent in addressing this issue in on their Yahoo list, however, suggesting a future update may re-introduce the 5-way nav. (Hopefully, and especially, in the play list view).

Other than that, I think the skin is a great improvement and it has become my skin of choice.

D'oh! I actually made a note of that and forgot to mention it in the review...

It's still a great design though, and (IMHO) a much better mobile music experience than you'll get on a dedicated mp3 player, ala` iPod.

Looks like these newer skins are not being made in 320X480. For cryin' freak'n out loud, you can't tell me that it would be that difficult. If you can make a Green one why not the Blue and Crimson as well. Why do I seem to get the feeling certain developers are giving the middle finger to us TX/Lifedrive/T3 owners. I have bought more software in the last 6 months then I had in the last six prior years. I will continue to support developers who create for the TX and dog those who do not.

The client provided several Palm handhelds for testing, including the LifeDrive and Tungsten T5.

I risked missing project deadlines to incorporate dynamic sizing. Our team thought the full screen view of patient data would impress our client and help our client impress its clients during sales calls. It took two days to learn how it worked and 15 minutes to 4 hours to incorporate it into each form. It also added additional testing time to ensure dynamic sizing support didn't break the application on legacy devices.

When we demonstrated dynamic sizing, our client responded, "OK." They immediately continued their line of questioning to ensure that (a) the data on the screen was accurate and (b) the feature set is equal or better than their competitors. Little else mattered.

So what's your point?

This is a consumer application which they already have a Green Version of the skin but don't put out a Red or Blue one. See the skin is already made they just need to change the freakin' color.

4 hours to incorporate into a form. Ah yea right. Better pull that Palm OS for Dummies book out one more time.