Sprint Treo Pro Launch Still Up in the Air

Originally rumored to be on sale in late January, then pushed back to Feb. 15th, now word comes in that the Sprint Treo Pro launch has been delayed yet again for unknown reasons. The Boy Genius Report has just posted a recent internal Sprint memo that states the CDMA Treo Pro "will not launch on 2/15/09 as previously communicated." (View the full memo after the break.)

Sprint's version of the Windows Mobile powered Treo Pro has been in the rumor mill for some time now. The device has already received FCC approval, official specs and a number of rounds of spy photos have been posted about and many stores have already received some product, so the latest holdup is quite curious. Palm's official website has even been recently updated with a "coming soon on Sprint" notice. 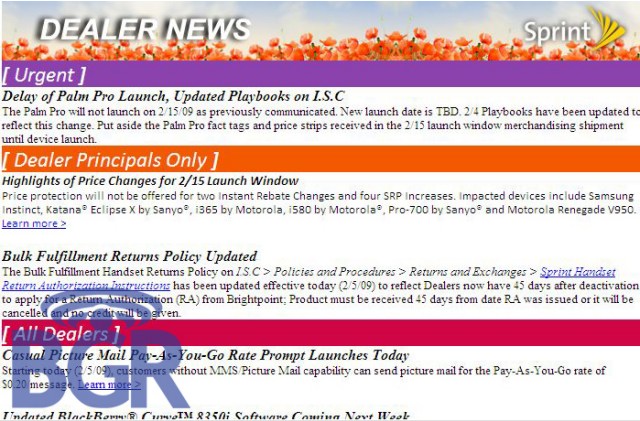 Fewer and fewer if message board/web traffic/words are any clue. E.g.:

== "...while we totally buy Sprint's statement that it's the
== testing process holding up retail availability, we're wondering
== who's going to come rushing with cash (or plastic) in hand when
== this sucker is sitting next to its webOS-powered sib a few months
== down the road. Anyone?"

Actually, I was referring to the question in the subject of this thread.

Corporate types who have no choice but WinMob, WinMob or WinMob might be quite interested in a sleek WinMob phone with such nice specs. I would be. But fortunately, I don't have to use WinMob.

Somewhere within the last few days I've read that Sprint has essentially no presence in the Enterprise.