Rumor: Originally rumored to launch next week, new details have emerged that claims the Sprint Treo Pro release has been slightly delayed. According to the latest scuttlebutt from MobilityToday and a reported Best Buy internal memo, the new release date is now set to be February 15th.

This news comes after the Sprint Treo Pro made its premature debut on Sprint.com yesterday, only to be quickly pulled. Sprint reps are now saying that yesterdays posting was put up accidentally and that the "The Treo Pro hasn't passed our testing yet." 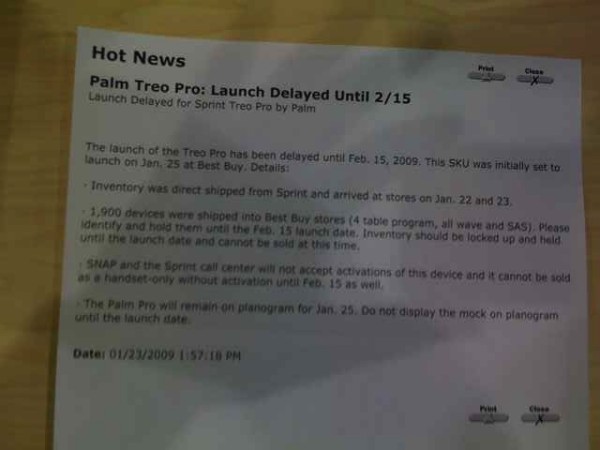 Due to the numerous leaks to date, we now know that the Sprint version of the Treo Pro will feature some slightly beefed up hardware specs. The retail packaging has also been leaked. And finally yesterday's posting on Sprint.com gave us the likely price of $249.99 after the usual rebates and 2 year contract agreement.

Another datapoint and reason

On Sale at Best Buy

The pro is now on Best Buys web site, it shows a two week ship date. However it shows in store availability at several stores around Indianapolis. The price is listed at $699. Personally I'm waiting for the pre, but the price is probably going to keep me away. I don't see how they could sell it for less than the $299 w/contract that the pro is commanding.

For some time now, Microsoft has been working on a significant overhaul of its operating system, known as Windows Mobile 7. However, that project has hit delays, prompting Microsoft to push forward with an interim update, Windows Mobile 6.5, which the company is widely expected to detail next month. Lees declined to comment specifically on either version of the operating system, but promised the company would have more to say on the OS front in Barcelona.

He noted that the power of the kinds of phones that come out next year will be incredible, well beyond even today's devices. Phones next year will have dual-core processors, super-fast data connections, and graphics power rivaling that of the original Xbox.

"That's a phenomenal thing on a phone," he said. The phones of the future will also have location information beyond just GPS sensors. "It will know where it is pointing, it will know which angle it is being held at."

Web browsing has been another weak spot for Microsoft. The company made up some ground late last year with a pocket browser that essentially crams the desktop Internet Explorer 6 into a Windows Mobile phone. But it lacks the kind of easy zooming and gesture recognition present on the iPhone or in Palm's Pre. Lees promised that Microsoft would surpass those interfaces by the end of the year.

RE: Microsoft aiming to recover lost ground in mobile

Lees promised that Microsoft would surpass those interfaces by the end of the year.

Since he promised, we can be sure that MS will do it. They are a company that has consistently kept their promises, particularly when it comes to features and release dates.

RE: Microsoft aiming to recover lost ground in mobile

6.5 has already engendered reactions in people - like getting a knife in the gut.

If at first you don't succeed ... It looks like Dell will try its hand once again on a smart, handheld device with apparent plans to jump into the smart phone market.

The Wall Street Journal says Dell has come up with handsets running both Android from Google and Windows Mobile from Microsoft, a version with a touchscreen, ala Apple's iPhone and Pre from Palm, and one with a slide-out QWERTY keypad.

Is anyone surprised by this?

Speculation was rife last year when Google was preparing to release its own mobile operating system that Dell back then would release its own handset running it. That didn't happen.

Then, as Palm descended into the abyss of irrelevance, there was widespread speculation that Dell would buy it. That didn't happen either.

When Dell hired former Motorola executive Ron Garriques, there was speculation that he was brought on board to launch Dell's handset initiatives. That didn't happen because of his non-compete clause.

Nevermind that all the while whenever he was asked, Dell CEO Michael Dell poo-poohed the idea, referring to an already crowded smart phone sector, and the difficulty of breaking into the dominance of Research in Motion and Apple .

What's amazing to me is how long this company's hand-wringing has gone on. Dell has watched Apple and Research in Motion, and Samsung and Nokia tighten their control at the expense of just about everyone else trying to gain entry. Palm grabbed headlines with the Pre, but we still don't have a release date or price - and it'll run on Sprint Nextel - so no one's really sure how much of a competitor it'll be.

Plus, why Dell decided to re-invent the wheel when it could've bought Palm for a song last year is beyond me. Unless it shows just how messed up Palm was that even a company behind the 8-ball such as Dell didn't think taking out Palm was worth it. Ouch.

Dell has been a sore under-performer since its prodigal, namesake founder returned to rescue it. The company continues to lose ground against Hewlett-Packard , its stock - down 60 percent last year, is now trading below $10 a share. It's plagued by layoffs, hiring freezes and cost-cutting. And now, to try to improve things, it's trying to enter one of the most competitive sectors in all of tech.

Dell apparently won't confirm a smart-phone entry, and the Journal says it could still abandon its plans. Seems this would have made far more sense a year ago, or two, or three. Instead, Dell becomes a Johnny-come-lately to an already very crowded party, at a time when wireless providers Verizon, AT&T and Sprint all seem to be suffering.

Dell's success here, now, or well into the future is everything but certain.

Maybe it's not coming at all?

The Sprint Treo Pro - was it cancelled back in December so EP had to quickly give Palm another chunk of bucks to cover the unexpected shortfall?

Many have questioned WHY Sprint would even bother with a Treo Pro given the 800w and Pre.

Many have asked "Why did Palm say they had plenty of bucks then, within blink of an eye, they got another $100 million from Elevation Partners?".

And at least one poster postulated "Did the Sprint Treo Pro get cancelled so Palm had to scramble to make up the bucks by giving Elevation Partner's a REAL gift of super-cheap stock?". Some retail investors in Palm stock are actually talking shareholder lawsuit over the timing of that $100 million purchase, BTW, since Palm at the time HAD to know that their stock price was going to appreciate dramatically very soon (after CES) with more than a little likelihood.

Now all sorts of delays/strangeness is happening with the "Sprint" Treo Pro.

And even Palm is playing games on their website by flashing a page with some words "Coming soon on Sprint". But shouldn't that be "Coming soon TO Sprint"? We've seen "on" before...

The coming weeks are going to be ... interesting...