While seemingly having little uptake in the smartphone market, Access have now set their sights on the nascent Mobile Intent Device (MID) market. The company has just announced that the Access Linux Platform will ad support for the emerging MID format.

Larger than a classic PDA and even more portable than a "netbook", MID devices are a relatively new niche in the mobile computing market.They typically come in a tablet like form factor with larger screens optimized for browsing the web. Nokia has made some strides with its Internet Tablet series, and other tech heavyweights such as Microsoft, Intel and Ubuntu are also working on MID projects.

Access said in a statement that they will be supporting the growth of the Mobile Internet Device (MID) market with the capability of running ACCESS Linux Platform on the emerging MID form at, giving MID manufacturers the same complete, flexible, commercial-grade, Linux mobile platform available for mobile handsets. The flexibility of ACCESS Linux Platform will enable licensees to create differentiated experiences, including UI innovations and support for larger displays.

The Access Linux Platform was first announced in in late 2006. It features a Linux core and also includes the ability to run Palm OS Garnet, Java and native Linux applications. It has been up until now primarily marketed towards smartphones. There has yet to be a commercial device available offering the operating system. A handset was partially announced earlier this year by Samsung and Orange, but due to recent reports it has been canceled.

The Access Linux Platform for MIDs is available to licensees immediately. Access is currently demoing the new functionality on Texas Instruments Zoom Mobile Development Kit at the LinuxWorld Expo going on this week in San Francisco. 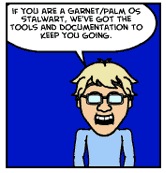 "Mobile Internet Devices will allow people to browse the web better than they can on today's smartphones," said Philip Solis, principal analyst at ABI Research. "Some of these devices will have support for full cellular voice and, in some cases, will replace handsets. This market will begin later this year and grow to about 90 million devices in 2012."

Update to ACCESS Linux Platform SDK released
Access is also releasing a new update to its ALP SDK. The new features include support for touch user interface; improved audio and video support; updated ALP-Glade (user interface designer) to support new ACCESS Linux Platform widget components; and added support for the SDK to run on the latest Ubuntu 8.04 release, in addition to the earlier version 7.10. The ALP v2.4 Update 1 update will be available for download from the ACCESS Developer Network (ADN) website at accessdevnet.com later this month.

Thanks to Mike Cane for the tip.

Gosh, will somebody put Palmsource / Access Linux Project out to pasture already. After getting their deck swabbed by Samsung/Orange this week, they make yet another desperate move. Just the thing ALPOs needs is another strategy shift. Since the day this trainwreck spun off from Palm it has been little more than a disaster waiting to happen.

MID may eventually get some traction in the marketplace. I for one am interested in the concept. But, expecting this group to do anything more than they have done since promising 13-14 Cobalt devices by year end (2004), would be tantamount to trying to support your family by playing the lottery. The Palm economy and clings to Centro-based life support with life-saving / life-ending Nova-surgery coming in the next 12 months. Don't forget the execs who got massive bonuses as the jumped of the sinking ship.

Somebody please burn the very last ediface of ALPOs and spread it's ashes across the Pacific from Japan to Silicon Valley. Just pocket what change you have left and give Palm Inc and a couple others enough rights to get past this disaster and try to recover.

In case you're wondering, I'm a little pessimistic about the future prospects of this shift. :-/

"Gosh, will somebody put Palmsource / Access Linux Project out to pasture already?"

Funny, that was exactly my thought too. Surely they have to run out of money eventually??

IMHO, the MID market is a terrible area to focus on, especially now with the EEE-PC, Wind etc taking up much of the consumer $$$ that might have been spent on such devices.

I don't know what Access should do at this point, but I'm pretty sure they should get out of the OS game - it's too crowded. They need a blue ocean.

Not really....IF MID (both Intel Atom-based and others (VIA etc) devices can continually undercut netbooks in pricing-and there's no reason why they shouldn't--then I could really see MIDs taking the entire remaining PDA market and a good bit away from PMPs/netbooks/cheap Wintel laptops/low-end smartphones.

ALP was far too closely tied to the customization whims of the carreiers. Lefty even said as much here that Access had to craft ALP into whatever their 'customers' want (the carriers). I doubt a cheap Chinese hardware manufacturer (think Everex etc) would be AS picky! And there aren't all of those nasty approval/testing/certification phases to go through either.

If Asus can profitably sell a 2G Surf EEE w/ Linux for <$299, then there's no reason someone couldn't do a tablet-sized MID for $100 less with no keyboard, otherwise comparable specs and a slightly smaller LCD.

I seriously wonder if there's been any chatter between Access and Palm about....someone seling something to someone for some lower-than-paid-for price?

Here's someone who has not been paying attention.

*Not one* of these MIDs are even in the frikkin neighborhood of the Asus 7xx or 9xx prices!

Unlike the Asus and other netbooks which use off-the-shelf components, these MIDs are all custom-designed jobbies. That's expensive.

Formula for FAIL, I think.

There's no reason Asus couldn't essentially reshuffle the EEE 7xx or 9xx innards into an UMPC-style device. We have every possible permutation under the sun already of EEE in netbook form and now the EEE box. I wouldn't rule out a tablet/UMPC/MID and/or set-top box versions of it down the road one bit.

Right now, while it's not the most powerful thing out there, there's no disputing that the Acer AspireOne packs a lot of oomph for the $ and if it wasn't so ugly with such spotty availability, would really have set a new benchmark for pricing in the category IMO. I really see $400 as the current price ceiling for <10", non-XP netbooks, regardless of the CPU choice. $300-$400 was traditionally the point where PDAs (from any era) stopped being attractive for most users and I think MIDs are going to have the exact same problems.

And while it may be a large, attractive niche, it shall remain a niche category destined to live in the shadow of cheap $400 dual-core 15" Wintel machines unless netbooks & UMPCs become entrenched in the traditional B&M retailers (at least Stateside). Not everyone lives next door to B&H, J&R or Fry's and that's the kind of thing most people will want to fondle before buying!

I actually think this may be good

Unlike the rest of you guys, I honestly believe, if Access made MIDs with ALP, I at least would buy one.

Keep in mind, ALP is NOT GarnetOS. It HAS GarnetOS emulation layer, but also has a Java layer and a native application layer. A LOT of fancy UI design has gone into it. Not to mention, it would have the latest version of NetFront, almost certainly featuring embedded media, AJAX, etc.

Not all MIDs look like mini-laptops. Think of the Nokia N810. It's essentially the same size as the Palm TX, but with added horsepower and features. And with ALP's GarnetOS emulation ability, it's essially what many of us Palm TX owners have been waiting for, a functional device that's not a smartphone! lol.

Now it's up to Access to get good hardware and build style.

All in all, I'm actually quite optimistic about this turn for Access and ALP.

IF there was an ALP-based MID device on the market today, I'd have to give it at least a very long, serious look. If Access can partner with a handful of solid hardware manufacturers, support SEAMLESS, BULLETPROOF importing of all Palm OS PIM data (from all versions of the OS, from Garnet 5.4.9 to OS 1.x) and come out of the box with at least a usable, fully-supported Garnet VM, then they stand to capture a still-quite possibly-substantial side of the market that Palm has utterly ignored for the past 3+ years.

If affordable MIDs take off (let me again stress the term affordable), it'll be IMO just the 3rd fork of the three-pronged evolutionary path that the PDA ended up taking (smartphones, PMPs, MIDs).

If MIDs flop, then there's always the burgeoning netbook market for those that need a screen larger than a smartphone's to fall back to.

Seriously, who cares if YOU would buy one?

For years we've been reading comments from PalmOS-fanboys: "Oh, *I* don't need multitasking, oh Blazer is good enough for *me*, no 3G GSM PalmOS smartphone - *I* don't need one" etc. etc.

You are cognative dissonanted individual. You buy Palm because it's Palm, not because it's state of the art. The market will, as it has, put Palm down as it is being overtaken by competitors with superior technology and experience. The result? JUST LOOK!

There is only 1 (!!) viable PalmOS-model left, the Centro. Compared to several models some years ago.

Who cares what YOU want? There's not enough YOUs to keep the PalmOS alive and soon you'll be crying because you don't understand why they don't make PalmOS devices anymore!

And if you don't understand the anology, same thing will happen to ALP.

yes, it looks like Access/ALP is "well positioned whichever way the market goes."

Nice vid. That reference board is a little sluggish IMO. If I was a ALPOs guy, I wooda slipped a 3ghz proc in that baby and shown off how crisp ALPOs can be.

Your frikkin link doesn't bloody work! Gives us the figures, man, the figures!

Go look. Expensive. But they're also showing one with XP (bah!).

My impression is that Alp, while well ahead in development, is still in beta and that's the reason why we haven't seen devices.

RE: Arstechnica on ALP

== "...Schlesinger tells us that ACCESS and other platform providers are
== "converging on LiMo compatibility"..."

Given what Orange/Samsung said about canceling the ALP phone and waiting for LiMo this is probably a smart thing to do...

RE: Arstechnica on ALP

Oh, I see the Linuxworld expo took place about a week after Orange/Samsung canceled that phone. THe cynic in me suggests a "spin" detection...