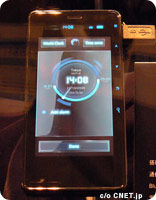 Access and Emblaze Mobile have announced a new Access Linux Platform powered device at an Access developer event going on this week in Tokyo. The device will be branded as the ELSE and is running a specialized version of ALP v3.0 called the Else Intuition platform.

The Else Intuition platform is being billed as a new, complete mobile platform developed by ACCESS and Emblaze Mobile. The heavily capitalized press release states the platform features an advanced new interface engine, accelerated 2D/3D graphics, multitasking and elegant transition effects. Access says that they are actively promoting the device to top-tier mobile operators worldwide, and operator evaluations are currently underway, though there are no other specifics on availability or device specifications (in English at least) at this time.

I so very much want to believe...

RE: I so very much want to believe...

Lefty you still out there? I hope you can provide us with some more concrete details, either on the forum here or via email.

>>>Imagine a device that is not a phone surrounded by gimmicks you will not use;

>>>where the camera literally replaces your digital camera;

>>>any one of its multitude of features is reached with no more than one light gesture of your finger and not buried deep inside folders within folders.

Who is this guy talking about?! WTF?

I'm writing this up as a poor translation from Japanese. When translating Japanese, inflection and meter is everything. If you just translate with word replacement, you loose over half what is communicated. I'll wait for the Disney version.

You loose it? As in you unleash it? Set it free?

The editor in me really wishes people would learn when to use "loose" vs. "lose"...

As for what you're saying about translating from Japanese, hai soo desu nee...

Typos on a Internet forum are best quietly forgiven. Otherwise we'd all be climbing over each other to point out silly little details like how "ne" is romanized with only one "e."

This is the future of Palm

Palm can jump off a cliff if this is for real. We'll actually have an up to date Palm with great PIM apps and seamless Palm OS integration (I'm hoping.) I hope this shows them how wrong they were to drop the functionality of the Palm for the WebOS apps designed for a high school girl.

Good points about the lightweight nature of WebOS PIM apps. The problem here is that this is actually Cobalt making yet another debut. Can anyone around here possibly expect anything besides vaporware.

Even if the unthinkable happens and it actually could be purchased, then how on earth would the platform get enough traffic to perpetually finance this endeavor?

Count me with the doubters on this one.
Pat Horne

I'm with the doubters too. I was hoping Access would come out with a Palm emulator for Android so we can use the Palm O/S we like on a platform supported across many hardware models. To try and create a whole new ecosystem will be hard against the established players like Apple, RIM, Symbian and, maybe, WebOS (if Palm survives at all).

Who knows. All comes down that Palm is calming they cannot license an OS and rolling their own WebOS lets them have more control of their destiny. That I can understand.

My guess is that Access is going mostly for the Asian market. Palm does not have the Pre in Asia.

CFreymarc wrote:
My guess is that Access is going mostly for the Asian market.

And it's common for Americans to forget just how BIG that market is. When a single telco in China has more customers than there are Americans, it shows how big the market really is.

Sure, but right now Access has exactly the same number of alp smartphones in Japan and China as in the US--zero.

What's up with the Pre in Asia? Does it support Japanese/Chinese/Korean?

nastebu wrote:
What's up with the Pre in Asia? Does it support Japanese/Chinese/Korean?

I thought this was already pretty clear: http://www.palminfocenter.com/news/9965/asiapacific-pre-will-be-secondgeneration-midtolate-2010/
I'm thinking the answer is, "There is no Pre in Asia."

Sorry! I posted without reading the new articles.

But my question was more about language support. Does it support Japanese/Chinese/Korean character sets? That's relevant outside of Asia as well as a lot of people need them even for a phone in the West.

I'll go on record as saying there is absolutely no market for this device. How are they going to best Apple, Google, RIM and Palm? By saying we have better to-do lists? Give me a break. All of the points made in the press release as MIke pointed out are moot.
For when you'd rather be doing anything other than paperwork.
http://www.rypenow.com

Did only I check Emblaze?

>>>Following 5 year of research, EM has embarked on an ambitious project to design the ultimate holistic mobile device. EM signed contracts in 2007 with Japanese giants Sharp and ACCESS to build, manufacture, and globally market the new device. In addition, EM is partnering with over 20 third-party mobile technology vendors, all of whom are the leading innovators in their specific field of mobile ingenuity. Together we are creating what will easily be the most sophisticated and revolutionary device in the market.

Now I want them to upload a frikkin YouTube vid. I want to see what they've cooked up.

More ELSE Pictures and Details

In Japanese, look in the article above for the english translation link.

Emblaze promises a proper launch for the Else on November 24th", according to FT.com (http://blogs.ft.com/techblog/2009/10/the-latest-iphone-challenger-is-something-else/). Wait and see!
BTW, more pictures here: http://www.slashphone.com/access-and-emblaze-mobile-unveil-else-intuition-with-linux-platform-237098

OK, having seen those SlashGear photos, I can now pronounce FAIL on it.

HARDWARE buttons on the SIDE?!

Have you read that the Droid isn't a single phone, but many?

Mike, it is a done deal. Lucas is on board and getting a check form this name. Frankly, I wouldn't be surprised to see R2D2 and C3PO so a a television commercial for this phone. Not that will pull in the geeks!

come on - he sold out long ago. look at all the chotchkies.

Lucas is the king of nerd merchandising. I think one of the few that was turned down was the glow-in-the-dark "light saber" condoms.

Android on a Palm smartphone