Rumor: Hands on Pictures of the Palm Tungsten T

The Russian handheld website, handy.ru, has obtained and published hands on pictures of the upcoming Palm Tungsten T. The pictures show the screen of the Tungsten T at various angles and a side by side comparison with a HP Journada 568. One noticeable change is, new default icons in the launcher screen.

The Tungsten T has a 320x320 pixel screen, built in Bluetooth 1.1, 16MB of RAM, Palm OS 5 and an ARM processor. According to rumors, the Tungsten T will use the TI OMAP1510 processor, which combines into a single chip an ARM-compliant processor with a DSP for multimedia capabilities, and runs at 175 MHz. The unit also has an SD/MMC expansion slot.

Both Palm OS 5 and the OMAP1510 chip have multimedia support built in and, according to anonymous sources, the Tungsten takes full advantage of it. It has a microphone, headphone jack, and a speaker.

Todd Bradley, CEO of Palm's Solutions Group, said his company would be launching a handheld that runs Palm OS 5 on October 28. It is widely believed this is the model he is referring to. 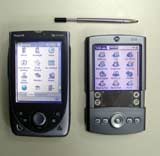 The Tungsten T already appears in the inventory system of a major electronics retailer, which says it will cost $500, though this isn't necessarily correct. The German Catalogue displays a price of 649 Euros, which is approximately $640 USD. Electronics are typically more expensive in Europe than their US equivalents.

Update: The Page of Pictures has been removed from Handy.ru, the reason is not clear at this point. We have all of the pictures mirrored here:

It's indeed that small

asiayeah @ 10/17/2002 2:38:01 AM #
The device is really compact when the graffiti area is not exposed! I wonder can the cover slides out itself automatically when the device is powered on?

The screen looks good as well.

that is my one complaint.

hotpaw4 @ 10/17/2002 3:10:38 AM #
Don't forget that virtual graffiti would require a bigger backlight which would shorten battery life. I have a T615c, but I think I'm going to like replacing it with a smaller volume unit with hopefully much better battery life. And I can't wait to benchmark a few armlet code modules and see if they really run more than 20 times faster.

Fly-By-Night @ 10/17/2002 5:46:00 AM #
Also, VG will require a physically bigger screen, so the sized of the Tungsten will always be the same size as when it is expanded. I for one would be willing to go without VG for the sake of a significantly smaller form factor.

Having said that, I am still waiting to see what Sony reveals next. I have yet to make up my mind which OS5 device to get, but the Tungsten is the current front runner!

Khunbenja @ 10/17/2002 7:52:42 AM #
I totally agree with the argument of a smaller form factor. I recently traded in my 665 for a SJ 30. Some people say I'm mad. For me, I believe that a small form factor over rides the incremental speed of the 66 MH gained with the 665. Although the SJ30 does not have the bells & whistles, I find that MP3 and the other "stuff" is worth the giveup compared to the smaller form factor. Now, If Sony produces a new SJ series with an ARM based processor and vertual grafitti, and put a phone into it, people, I believe we would have the ultimate PDA. What do you think???

RE: It's indeed *NOT* that small

That would be
1 anoying
2 a waste of battery
and 3 just another thibng to break. I dont like the idea of mving parts on the handheld anyway.

Im even leery about mem expassion becasue of the moving parts which is nothing compared to this.

Dennizlerim @ 10/17/2002 10:07:42 AM #
What did you expect? An inch less?
I mean compared to the m5xx series and the features that come with the new tungtsen, I would say it is small.
Even if it is as long as the NR series when extended, how often would you use graffiti? And would it be bad?
I mean everybody here seams to love the NR s, so where is the problem if something is as small as????

Why would you want it to do that? The whole reason I think the slider could be a nice feature is that I often use my PDA with no need for text input.

I admit i haven't measured the height of an m505 or m515 myself, but the dimensions i have seen list those units as 4.5 inches in height. Thats a difference of .4 inches between those units and the Tungsten T. The other thing here is that the Tungsten T has a D-Pad which is larger in circumferance than the buttons are (so it takes up more 'height') - thus, the sliding mechanism isn't here just to make it .4 inches smaller then the m series - its here to keep keep it from being .4 inches larger.

>Why would you want it to do that? The whole reason I >think the slider could be a nice feature is that I often >use my PDA with no need for text input.

Yes, but how often do one needs to tap on the "Home" or the "Menu" icon in the silk screen? I think Palm needs to provide a software or hardware button equivalent for those two functions, if one wants to use the PDA without sliding the cover out.

To slide the cover out, it may solves the battery issue by using a mechanical spring. Just a thought.

From previous pictures it was difficult to tell what Tungstun T is like, size-wise. Now, looking at these photos it changes my mind about how successful this wil be. I'll wait to see it in person to make my final judgement, but it looks like Plam has got a winner here.

I'm Clié fan, but I like what PalmSolutions is doing. Built-in Bluetooth in a compact size. There may be better hardware out there but noone really has it all down to this size.

blue9 @ 10/17/2002 3:09:54 PM #
Good point, it seems we'd have to apply two protectors to it; doesn't look easy applying one to the graffiti area. But I think I'm gonna have to get one of these babies next year; imo, The smaller the better. I trade off between using graffiti and the virtual keyboard now and then when one becomes annoying to use. So having the retractable graffiti part is cool. Very compact on the carry, quick and easy for input (using the vk). The thumb controller which consolidates the up/down left/right into one is a plus too; gamer friendly :-)

New Stylus (...and what's the text on the back)

ScottP @ 10/17/2002 2:59:58 AM #
What's everyone's thoughts on the new 'expanding' stylus..? Anybody notice where this fits in to the Tungsten|T or that there appears to be no raised area for easily removing it as for other styli?

On Another Thread...
Hard to tell is this is a Tungsten|T or an Oslo, due to the blurring of the top right corner. But you can just about make out the words 'Bluetooth 1.1 Compliant' on the back [under the reset pin hole] from one of the images, but anybody else able to read the others ... what's it state under OMAP))? Nice to get a better idea of the sliding mechanism though.

Still, can't wait to get the chance to have a play with one in a store.

kzemach @ 10/17/2002 3:56:34 PM #
For those of us who've been around since the early days, you may remember the DIY stylus for the Old Palm pros, 5000s, etc by a guy named Eric Handy. He used a radio shack antenna and the tip of a regular stylus. I made one following his directions- you ended up with a stylus that fit perfectly in the slot, had a much nicer, heavier feel, and then extended to over a FOOT in length, so that you could make it a decent pencil size (6") or use it as a pointer.

The Privilege of a 22Km Tombstone

The ones missing, after Prefs alphabetically, would be Security, SMS, To Do List and Welcome. Those four would be enough to account for two more rows and that's what seems to be missing according to the scrollbar. There could be two more though.

I mean, it's supposed to "take full advantage" of the multimedia capabilities. But where's that mediaplayer??

Would we be able to play mp3 in the background? I hope I can use my Palm while listening to the MP3.

Dennizlerim @ 10/17/2002 9:54:53 AM #
Probably Palm will do it like they always do.
Put in the basic progs and thats it.
But as we all know, a week after release there will be tons of software and if I remember right, there will be flash for palm. So why not Winamp for Palm....

JKingGrim @ 10/18/2002 3:37:32 PM #
Actually, I disagree. Palm always has bonus software. With the m515, you get Documents to Go, Avant Go, Chapura, Power One Graphing Calculator, and several other apps. It would make perfect sense to include a media player to help promote sales.

I wonder if Hand Zipper and Insider come with it too?

I ran the russian web page through Altavista-you can get some useful info off of that-is there anyone here who knows Russian and would be willing to translate it for us?

As to whether this is the Oslo or T,

"I do not know accurately, to what series it belongs.that whether of Oslo, the whether Tungsten, marking was absent.According to some signs/ criteria, most likely, this of Oslo, the prototype Of tungsten.But the design of the first pal6ma. under the administration Of palm OS 5.0 will change hardly."