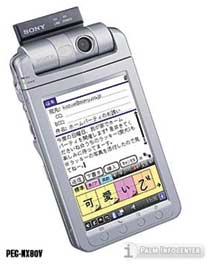 The NX80V has a 1.3 Megapixel camera, while the NX73V includes a .3 MP camera. Both also have a flash and can record short video clips.

Sony rates the battery life at approximately 14 days, an improvement over the 10 day rating of the NX70V. Sony also claims 7 hours of music playback, over 4 hours for the NX70V. 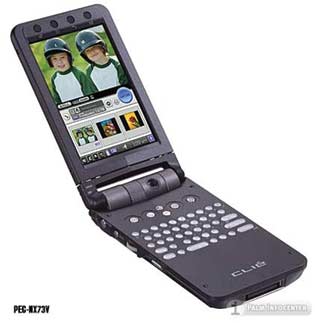 The new models include native support for the Sony Memory Stick pro format. There is also a CF slot which can be ?hidden? or retraced into the casing. Sony will also support using Compact Flash memory cards as well as the Wireless LAN card.

While the Japanese models do not include integrated Bluetooth, PDAFrance has confirmed that the European version of the NX73V will include Bluetooth. This raises the possibility that Bluetooth may be integrated for other markets.

The NX80V and NX73V will be available in Japan on June 28th and June 7th respectively. Final pricing has not been set but according to PCWeb the NX80V is expected to be around 60,000 Yen or roughly $510 USD.

Shall we start taking bets?

With Sony no longer selling the NX60V and the NX70V reduced in price, this may be showing the new ones on the horizon.

If they could get the NZ90V down to a smaller form factor, and keep the Bluetooth on-board, then I think they have a winner with me. Maybe that's what the NX73V is.

Shall we start taking bets on when the *next* Clies...

At least it's not like buying a computer that's superceded 9mo. later.

New and different models of Clies coming off the assembly line remind my of that Lucy episode with her and Ethyl working at the candy factory.

Cliesource has pictures of the NEW CLIE LINE!!

If this is the new Clie form factor, it's pretty sweet!

Kinda like the first clam-shell clies form factor that was shown on PIC in feb. 2002.

Check out www.cliesource.com for the pictures

OcellNuri @ 5/27/2003 2:31:09 PM #
The slot will not be able to be folded back with a memory card in it though. If you look, you can see that a portion of the slot is cut out so that the camera can still rotate fully when the slot is closed. If you tried to close the slot with a card in it, the card would hit the hump from the camera and it would never get closed.

OcellNuri @ 5/27/2003 11:50:15 PM #
I'm not talking about the WiFi card. A standard CF Memory card will still block the "hump" from the camera. There is a section cut out of the CF slot for the "hump" to go into. A CF card would block this. So unless you could get an ultra short CF card that goes about an inch INSIDE of the CF slot, you will not be able to close the slot with a card inside.

Kaitou @ 5/27/2003 11:56:25 AM #
I've been waiting for a reason to upgrade from my good ol' NR70V, and here it is... the NX80 has pretty much everything I need/want, a nicer camera with flash, which is good for me, as I use even the sad little NR camera quite a lot, to take notes, and just to journal a day, or catch something interesting. backlit keyboard, hardware keys on the screen half, CF slot, even with partial memory support (10-1 odds that we see a hack for it to get the CF memory working with the camera/mp3 player apps). One has to remember the nay-sayers who were predicting that Sony will no longer release a Clie with a CF slot, because of the driver. Sony does see the writing on the wall after a while, they just don't want to give up their mem stick format (and I do like the side-loading mem stick slot).
The new graffiti is interesting, and the site of the company that produced it, shows that they do have a latin character version of their program, so we may see it stay for the US release.
I do have to wonder, if the US release will use OS5.2, but that isn't too big of a concern for me. The battery life is better, with the new ARM as well (NR was also rated at 10 days, just like the NX60/70). So while this may be an incremental upgrade for current NX users, it is what I needed as an NR user, to get me to switch models.

thooeu @ 5/27/2003 12:06:49 PM #
This is definitely a good upgrade for NR users if you did not find NX worth the upgrade. Camera from 100K pixels to 1.3 mega pixels, better battery life, more memory. Even though user area is 16MB, most large applications are pre-installed now - NetFront (2MB), Picsel Viewer ("MB), Japanese dictionaries (2MB), Clie Mail, Work Alarm Clock, etc. You have the full 16MB for your applications. Not to mention the subtle improvements to the keyboards, buttons, and the overall design.

Any word if they're using the Transflective screens, like the new Palms?

I think it's fine for normal memory sticks, but it will be annoying for over-sized ones like the bluetooth memory stick (or if they ever release a GPS stick, etc.). I think the Palm i70x has the side-loading memory slot as well, and the same issue.

abosco @ 5/27/2003 3:44:42 PM #
The technology is dated by almost six months, that's why. Try comparing Palm's transflectives with the NZ90. That is one bright sucker. I suspect this new NX line to meet or exceed that standard set by the NZ.

Also, the Palm transflectives have a warmer tone. Colors have just a hint of warm color, while the Clies use cooler colors. It's a matter of preference, really.

They are just a refinement of the old NX70V model. And the new case design is also disappointingly bland. It weighs just as much, though the collapsing CF slot is very nice. The keyboard keys are still too small. The CPU speed could have been upped to 400 Mhz, but the biggest letdown is the main memory size limitation: you get just 11Kb (NX73) or 16Kb (NX80) available! How can they release this supposedly high-end device when the Palm Tungsten C gives you over 50 Kb free?

They better retail these for a lot less than the old NX70V...

Also, I see that Bluetooth is still optional, although some people claim it will be included in European versions. I doubt that. My guess is that in some places the device may be (initially) bundled with a free Bluetooth MemoryStick. Sony has too many of these overpriced sticks still lying around in their inventory collecting dust.

Thanks for nothing, Sony!

Seriously - where the hell is the 320x480 VG device in non-clamshell form factor, that we've all been screaming about for - like - a year now? iQue is nice - but i don't want GPS (would rather built-in wifi or BT). I just assumed Sony would have addressed this by now. I mean - this is the same form of PocketPCs have (PPCs have lower res though) - so u would think somebody making palm OS devices would do the obvious thing and give us what we want already. I know everybody doesn't want this - but i've heard a thousand complaints/requests about this in the last year, so i know many do.

Timothy Rapson @ 5/27/2003 7:17:52 PM #
The lack of a standard T-form factor with virtual grafitti is absolutely baffling. In fact, it has been about 2 years that this has been on the begging list of one and all in the Sony/Palm world. The Handera and original color Clies showed what was possible. We all thought when we saw the NR that it was inevitable, but that was a culmination of a year of dreaming.

How can we still be sitting here waiting? Is Sony stupid? I really wonder. Now, we have the Tungsten C. How many sales did Palm lose on it because it has a keyboard rather than a half VGA virtual grafitt screen? Is Palm stupid, too?

I can only assume that these two companies are run by fools.

I am not generally so insulting, but come on Palm and Sony! Get on with it!

But I add my vote for the Next Palm Standard:

-- and a TUNGSTEN T-like stylus. Bag that damned quarter-stylus already, Sony! Enough with the kiddie styli!

Wake up Palm SG! Get "Eric the Red" an alarm clock already! Take the above paras, print them out in 256-POINT TYPE and wallpaper his damned office with them!!

>BUILT-IN WiFi
I could live without this, though it would certainly be a nice option.

When will someone release a mainstream Palm handheld with 320x480 that isn't an NR/NX form-factor? I like the screen dimensions but I don't like the size of the device and the crappy keyboard and camera.

Lol... Whatever happened to the "zen of palm"? You need to check out http://www.palmos.com/dev/support/docs/zenofpalm/ZenTOC.html

Everyone says Palm is playing second fiddle to Sony, but the truly "special" Sony models (eg NR, NX series) are all much too big and heavy to comfortably put in a shirt pocket, IMHO. Point? Let Palm SG "dance with the girl that brung ya", and let Sony do whatever the hell it wants to do.

I for one just hope Sony stops its high-minded antics and starts making units with SD instead of Memory Stick, and Palm Universal Connectors.

I believ it, but then again, I never was a sceptic.