Sony Japan has released a new Clie for the Japanese market only. The Clie PEG-VZ90 is a Palm OS multimedia Clie handheld, that features a large OLED screen, slider hidden buttons, plentiful memory and WiFi.

The Sony Clie VZ90 features a 3.8 inch, 65k color organic EL display, with a 480x320 pixel resolution. According to Sony, the display provides a contrast ratio of 1000:1, a fast response time and a 180-degree viewing angle. This is the first Palm OS handheld to ship with a OLED screen.

The handheld runs Sony's 123 MHz handheld engine system on the Japanese version of Palm OS Garnet v5.2.1. It includes, 64MB of RAM, of which 40MB is user available, as well as 128MB of built in Flash, where 95MB of that is available to the user. The unit also features dual memory expansion, with a memory stick PRO slot and a Compact Flash Type I/II slot that can also accommodate select IO CF expansion cards. The handheld also has built in WiFi wireless and a IR port for connectivity.

The unit places a strong emphasis on multimedia, with a included range of media software for playing audio and mp3's, watching movies (MPEG4 supported) and photos. The screen is primarily orientated horizontally, with a hidden row of buttons and a control pad which slides outs from behind, it is sandwiched on the sides by a pair of stereo speakers. The display can be used in both vertical and horizontal modes, depending on the application. The unit also includes Sony's Clie Organizer PIM software. 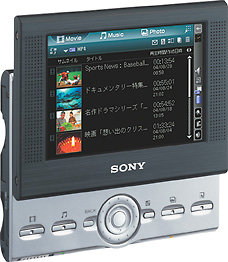 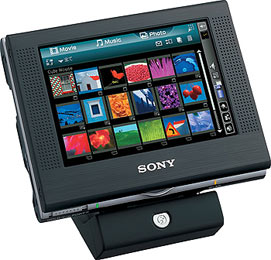 The VZ90 has a price tag of 89,800 Yen (approximately $820 USD). It will be available in Japan on September 25, but will very unlikely be sold outside of Japan, as Sony has announced they will no longer market or release handhelds for the US and European markets.

Thanks to Rich, Alfredo, Jonathan and other for the tip.

RhinoSteve @ 9/14/2004 2:02:19 PM #
The grey market is going to be huge for this one in the states! I don't see one if these Stateside for less than a grand. Why didn't they do this in the States? Simple, Japanese are more prone to pay higher prices for consumer electronics than Americans.

What makes Oled so great? If I understand correctly... Doesn't OLED have a lower life span than current LCDs?

abosco @ 9/14/2004 7:15:04 PM #
The advantage is battery life. OLED means Organic Light Emitting Diode, and in short, it means when electrical current flows through the pixels, the color that is created actually gives off light. This is actually bright enough to null the need for a backlight. See where this is going? You end up with a screen that's bright, yet doesn't need a backlight, so you can make a MUCH thinner device, as well as it having incredible battery life since the biggest battery drain is indeed backlighting.

A PDA or Camera isn't on all the time. If you think about it, a PDA screen is probably on for a few hours a month. At this rate the OLED could theoretically last for decades (although the PDA wouldn't).

Less battery power is one benefit. Fantastic picture is where the OLED really shines. Add to that, literal paper thin dimensions and weight. OLED was made to go with PDAs.

JonathanChoo @ 9/15/2004 11:30:10 AM #
It has a 2600mAh battery. That explains the thickness. Sony is probably marketing this as a TiVo like player for those who wants PDA functions as well. Expect the next version to include a proper harddrive.

Perhaps Sony's motherboard offloads a lot of video processing to a separate chip and leaves the little handheld engine to pure processing?

abosco @ 9/14/2004 7:17:33 PM #
No, you can indeed compare MHz ratings to each other if they have the same ARM core. Regardless, the HHE is slow as hell, and anybody who uses a Clie with that horrible 123 MHz processor will tell you so (and if they don't, you'll hear the inevitable "it's good enough for me!").

JonathanChoo @ 9/15/2004 7:11:41 AM #
Maybe you can on processors using ARM9 instructions but on x86 processors you can't. So many things can be a factor from the chipset to type of memory to FSB, cache size etc etc etc. Even Intel's own CPU (Pentiums) can't be compared Mhz to Mhz despite it all being x86.

Wolfgard @ 9/15/2004 9:51:56 AM #
Yes, you can't compare on the x86 line of processors due to numbers of instructions executed per sec and all, BUT from what I know, most ARM processors are comparable. The TH55 (which uses the 123mhz Sony HE), chugs when displaying Divx video even when compared to a z71 144mhz Texas OMAP!

Maybe the VZ90 has a dedicated graphics processor like the Zodiac. That should help offload some processing off the processor.

So they have gone back to the days of the n770c et al(still have one) which will still play mp3 in the background and play games better than my 144mhz Treo, because it has seperate Audio hardware.

Well that is the theory. I have no idea what sort of slowdown the Sony Media players actually give ...

GearHead @ 9/14/2004 2:55:55 PM #
I thought SOny was out of Palm business. Maybe they change their mind. Anyways if they decide to release on in U.S. I definetely want one. As long as it come with the new 270 series Intel processors at least 312MHz. I love the SONY Craftsmanship, I am sure this would be a winner. Think about almost same time as Palm about to relase their new handhelds...

At first glimpse, this device hearkened back to PSRC execs putting out feelers for a "notebook" / "tablet" device running POS. I wonder if that's alive anywhere in siliconville?

The jog dial on the other hand? The jog dial / dpad combination is an awesome idea. It even looks like the jog dial is useable when the Palm is folded up.

Too bad Sony is only releasing this for the Japan market. Oh well, let's see what PalmOne can come up with. Are you listing PalmOne? That's the EXACT style of Dpad I want on the T5 or whatever is next!

I would never buy this, or even consider it for that matter. Also, it's probably huge if it also has a CF slot.

Which one would you buy?

For those of you who are not familiar with OQO, you can find out more about it at www.oqo.com.

It was an easy decision for me, VZ90 in a nano-second.

GearHead @ 9/15/2004 7:27:39 AM #
It seems like SONY got their essence from OQO. I wish OQO was a little cheaper though! I am ready to shell out $1,000 for OQO. It seems great. I wonder what kind of processor in it? Does it come with a bigger HD? I am sure in near future others will follow OQO concept. Either way it is a very innovative idea.

I think comparing the Sony PDAs to the OQO is like apples and oranges... the OQO is technically a fully functioning ultra-mini-laptop from what I'm reading (sans floppy or optical drive built in).

its over 3 times bigger then my palm... so hows this the same

Sony Is So Good At Being Maddening!

Why would Sony just pull out of the US market? It made sense to me when I thought they were dropping their Palm PDA line all togehter, but with all of the R&D, design, testing, and manufacturing costs required for new Japanese units, it seems that those costs would be more easily defrayed when supported by the US market as well.

Sony's combination of proprietary software/hardware, overpriced MS, and must-have innovative cool design makes me crazy. Pulling it all out of the US just adds insult to injury.

RE: Sony Is So Good At Being Maddening!

yusakugo @ 9/15/2004 9:55:47 AM #
Not if they have to sell it at such an elevated price. Even with a limited production run, the costs of importing the units to the US and the marketing on top of the low number of sales probably doesn't add up for Sony... they probably would lose money from doing so. $850 will get you a pretty decent laptop already that may not be as portable but is certainly much more powerful. The Japanese market (and many of the Asian markets) are more likely to pay the premium for such devices... Sony has a target number for sales to break even on the unit. Sony probably can sell tens of thousands of these units in Asia where the market in the US and Europe is just a fraction of that for their high end units.

It also seems that Sony's experience in the European and US markets of having people return CLIEs because of their complexity (not because the units were defective) was another reason Sony didn't want to support these markets... they were losing more money in the returns and the technical support that they wouldn't face in the Japanese market.