Sony is showing a new Clie model at the WPC Expo trade-show in Japan. The new models has a slim design with a jog dial located in the front. A few details are know about the handheld and a few pictures are available from the expo. 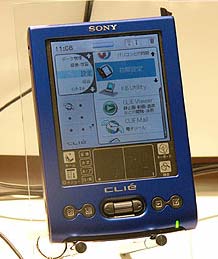 The new Clie has a 320x320 pixel screen and runs Palm OS 5.2. Sony has placed a redesigned jog dial on the front of the handheld, where you would typically find the up/down buttons. The device has a thickness of 11.9mm or .47 inches. It appears to lack an audio port and some sites are reporting the devices does not have an audio program.

It is said to come in six different colors (purple, white, black, red, blue, silver). It should be available in Japan before the end of the year for around 20,000 Yen, which is roughly $175 USD. Not many other details or information about a version for outside of Japan are known yet.

The Japanese websites, intermezzo.cool and the WPC Expo have additional pictures of the handheld and show.

According to ZDNet Japan Sony was also showing a prototype projection keyboard. The demo was put together by Canesta, Inc, which has developed the chipset for the virtual keyboard. It enables devices to project an image of a keyboard on a nearby flat surface, and then read the finger movements of a user who types on that image, as if it were a physical, full-sized keyboard. Canestas electronic perception technology resolves the users finger movements in real time into keystrokes electronically provided to the device.

Thanks to Tiger_BB for the tip!

``It will not come with a headphone jack, and will therefore not be able to be used as a music player. ``

and who is going to buy this piece of junk?

skennedy1217 @ 9/17/2003 9:19:59 PM #
Do you really think that your negativity is ever going to convince anyone of your position? It's a major turn-off to folks. You should try to be more positive and channel your energy into producing a better PDA or OS. You're obviously passionate...so do some good in the world rather than bring everyone down.

Organizer era is over, and the competition can out do the feature for same price. (wireless option and audio capability)

BTW, I agree with your point.

Actually I think gonna have to agree with Ska here. If the T|E has an audio port, then this thing is gonna look pathetic in comparison. Furthermore, how is it gonna compete with the h1935 with no audio and thus no mutlimendia capability! UGH! Way to go Sony...

When tech moves ahead it's interseting to see how disgruntled we can be towards yesterday's cutting edge. Wasn't it only 2 years ago when the m505 was the Palm OS rage? This unit is much much better.

Mr guesswho thinks the organizer era is over, but I think there is still a very strong market for a basic PDA targetted at newbies. If you want to grow the PDA market, reel them in, then they'll start to upgrade.

Basic marketing 101 says to me that there's always room for an entry level model. If we all own Honda Accords do we scoff when a new Civic is introduced? Or do we sit there and complain that it's samller, underpowerd, yadda yadda. well, maybe we do, but it's not aimed at us dudes! New buyers step in and upgrade later.

drac @ 9/18/2003 9:18:06 AM #
I *would* have agreed that organizer era is over, except that I've just been involved in the choice of PDA for three newbies, and all three say they prefer cheapness to MP3 support.

*They* want organisers. Except for the one who wants an organizer that also acts as a chess database.

Rico @ 9/18/2003 10:04:05 AM #
This model looks interesting to me. The lack of mp3 capablity bothers me not in the least. In fact, I've owned PDA's that had this capability, and wished that I could get a cheaper version of that model that eliminated mp3 capablity, since I never used it.

I like to read the various PDA discussion boards, and I sometimes wonder if it is a very specific audience that frequents these sites, the so-called "power user." I imagine that user to be younger than I am and interested in as many of the latest features (especially multi-media and gaming features) attached to a model as is possible. That person is often hard to please!

I do admire the responses that view the "big picture" of a manufacturer designing a line of models that contain various feature sets at different price points. One of those models is likely going to be what I am looking for, and one of those models might be what you are looking for.

I have no idea if, as has been suggested, the manufacturers are monitoring these boards for feedback about their models. That may be true, but I bet they "consider the source" in evaluating the conversation and opinions. I would guess their marketing department's analysis and sales figures play a greater role in their decision making.

Regardless, I enjoy reading these posts. I love the term "early adopter tax" to describe being willing to buy the most recently introduced model (long before your current model has outlived its usefulness) because the lure of "new...better" is too hard to resist. That describes me at many stages of my life!

all of the above has audio capability plus SD slot.

Many of us already have MP3 players. My iRiver plays 15+ hours of tunes on 1 AA battery. Its small enough to carry in my pocket without worrying breaking or scratching a PDA screen. And not using precious battery life of my PDA.

Its a nice CLIE to come out, in the sense that the older CLIEs' prices will now be pushed down or adjusted. So whats wrong with that? Nothing!

I say, keep coming out with CLIE please SONY!!!

Yes, but the entry-level PDA is no longer priced at or over $150. This is at least mid-range, and with dozens of PDAs currently or soon-to-be available with many more features at a slightly higher price, this seems doomed. Not cheap enough for the low end, not enough features for the middle, and kiss the high end goodbye.

If priced clearly below $199, then likely same class of buyers who make the entry-level Zire the best selling palmtop ever. I'm sure Sony would like some of that sales volume as well.

except 20,000Yen is also happen to be the target price for Dell X3.

Sony really needs an affordable PalmOS 5 device right about now, and this looks like a good possibility.

I imagine most right-handed users hold the unit in their left hand while doing entry, meaning you have to replace the stylus to free up your hand before turning the unit on/off. Also, it's harder for one-handed lookups, like turning the handheld on to check an address while on the phone.

Kesh @ 9/18/2003 9:43:39 AM #
Probably so you won't accidentally turn the unit on in your pocket by hitting the launcher buttons. Plus, it's expected on Sony units now, since every other model has one.

why not support mp3 paly?

Konstantin @ 9/17/2003 11:00:19 PM #
I think it lacks audio because Sony will probably release some sort of an audio/video adapter adapter wich presumably will be able to record audio and video on the memory stick.

bcombee @ 9/19/2003 5:18:07 AM #
It probably does support the audio API, but only has a speaker, not a headphone jack. This would allow it to play MP3 files using other software, and it would also provide feedback for games and alarms, but you wouldn't be able to use it as a personal player.

I'm actually wondering if its using the new Sony ARM "Handheld Processor" that's also being used in the UX40/50 devices. I'd think that Sony would want to move as much of their production to their own chip if possible.

Someone pinch me, I'm having a nightmare!

No digital audio capabilities...no wireless...no hi-res+ screen...no built-in camera, nor any other advanced features to speak of? So basically this device does absolutely nothing? It's just an old T615C running a new processor and OS5? Ha Ha Ha! Is Sony devolving or something? What next...monochrome screens? My God Sony, could you at least PRETEND you are trying to make competitive products? I could overlook the 320x320 screen, but why would Sony strip away every compelling feature that other handheld vendors are offering at this price?

I hope this isn't the ONLY new product they have up their sleeves, or I'll be stuffing Sony's stockings with coal (or some other material) this Christmas.

Well it looks like my choices are down to the Tungsten E or Zodiac. Hmmm...at least the Zodiac has a flip cover.

gfunkmagic @ 9/17/2003 10:36:40 PM #
I agree, it doesn't look sound so appealing, However, I'ld like to see how this new clie compares to the T|E when it's finally released. If T|E doesn't have an audio port either, both the devices are gonna be in a world of hurt and Sony and Palmone might as well cede the entire low end to HP and Dell. Hopefully, PalmOne will fullfill expections. Whoa! Isn't it funny how the roles have changed?

guesswho @ 9/17/2003 11:25:58 PM #
Sony is showing its stripe. They are a consumer electronic companey. And Clie is just another walkman product instead of computer. Like walkman, they think they can change casing with louder color, move around buttons a little and call it new product. They don't give a rats ass if the computer can or cannot run third party programs. It's an organizer, If it runs built in apps, what else would people want?

Dell and HP on the other hand are making handheld like they are making laptop. Either you redo the old stuff with lower price, or add features with new price. Otherwise don't even pretend offering a product as new and think people will buy it.

They're selling millions of their POS, the Zire m150.

guesswho @ 9/17/2003 11:48:40 PM #
Zire sale has gone down hill since. The sub $100 market was a virgin territory, that's why Palms sell zire by the bushel. But in low end PDA, once a buyer get what they want they rarely upgrade new PDA just for the heck of it. A grandma or a socker mom, won't update a PDA because it is now has color screen or faster processor. They won't purchase new PDA as long as the old one still works.

If the TE doesn't have mp3 I'll be getting myself the the iPaq 1940, with or without the yellow screen.
Period.

sandeman @ 9/18/2003 6:56:12 AM #
I think the majority of PDA's is still purchased by large companies for their employees.
These companies don't need sound, but can see the benefits of color screens, small size and an up-to-date OS. At my work new PC's are also delivered without speakers, so if you want sound you have to arrange it yourself.