Samsung recently showed off their two new upcoming Palm OS 5 smartphones at the past ITU World Telecom Conference in Switzerland.

Both models feature a small clamshell design and run the latest version of the Palm OS. The i505 features a new rotatable display. Read on for a closer look at the SGH-i500 and the new SGH-i505.

Both new smartphones feature a clamshell design run Palm OS 5.2 and operate on GSM networks. The Samsung SGH-i500 was previously first announced in March, and will be sold in europe sometime next year. The SGH-i505 made its public debut at ITU last week. 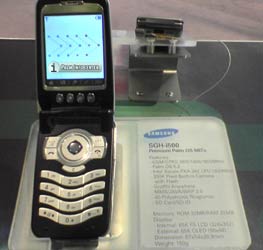 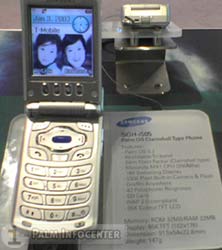 SGH-i505 - US and Beyond
The SGH-i505 has similar shape and features as the previous model, but is distinguished by its flip and twist screen. It has a 180 degree rotatable display that converts over into a tablet mode, much like the Sony NX series. It has a external antenna and built in VGA camera and flash on the back. It is expected sometime in 2004.

You can click on the images for high resolution pictures and more information.

Admin @ 10/24/2003 8:21:39 PM #
well, since Samsung has not really officially announced these models and is just "previewing" them (and they do so way in advance of availability) all the specs are not known or could change by the time these hit the streets.

treo007 @ 10/24/2003 8:59:10 PM #
True, no one knows for sure if these will be the released specs. Even more than BT however, I'm hoping for a CDMA model. The fact is that Sprint's and Verizon's data networks blow any GPRS competitor away (they'll also be the first to bring 3G to market). Hopefully, if they do release a CDMA model, it will be 3G compliant. Not to get off on a tangent, but 3G will truly change everything. It will finally make it quicker and easier to look up information than to call and get it.

The Treo 600 is evidence that you can make a CDMA handset just as easily as that of a GSM (and vice versa). I'm told there's even a GSM/CDMA handset in the works that Verizon will be releasing within the next 3 months.

I was really disappointed to know that the treo 600 didnt have BT and now got even more disappointed with this.

A Bluetothless SD card is next-to-useless in a device that just has a single expansion slot. Even if working drivers were available, who wants to be constantly swapping SD and SDIO cards in and out, moving apps in and out of RAM whenever you want to use an SDIO card and your Palm/PDA-phone at the same time? The HandEra 330 solution was the best to date: give consumers the maximum flexibility and let them decide what they want to use. But Samsung is a clever company. They know exactly what their competitors are doing and if they think it's worth it, they can easily add Bluetoothless to their design before production starts.

The CLIE UX-50's multiple connectivity options are the way of the future and don't really add much (around $10) to the hardware costs. If Sony adds CompactFlash expansion to the UX-50 it will become the most connectable PDA ever built and would be an effective laptop replacement.

mikecane @ 10/25/2003 12:19:22 PM #
At the Treo NYC launch, it was said that BT was left out because it was envisioned that the 600 would be the only device someone would carry, hence BT would be added expense and redundant.

Obviously, the people who will want to *buy* these things think differently...

...and, yes, I guess the issue of BT headsets was overlooked too.

I find it difficult to believe that a PDA-phone as well-conceived as the Treo 600 could have omitted Bluetoothless without having a reason. This doesn't make sense, unless they ran into packaging problems. The circuitry for Bluetoothless is very compact, so maybe it just was a miscalcuation. Lack of Bluetoothless is more of an issue in The Rest Of The World (TROTW), not in the USA. It would have been nice to use one of those crappy $200 Bluetoothless headsets and sound like I'm talking from the bottom of a well, but I guess I'll have to make do with a quality wired headset.

Bluetooth is kind of a wireless USB cable replacment. You can do more than just surfing the net by connecting a phone to a PDA by BT. I am shure EVERYONE wants it!!

Escalus @ 10/26/2003 4:47:27 PM #
"I find it difficult to believe that a PDA-phone as well-conceived as the Treo 600 could have omitted Bluetoothless without having a reason. This doesn't make sense, unless they ran into packaging problems."

The potential of Bluetoothless unfortunately is not matched by the reality of its current implementation. Despite this, eventually a good inexpensive (less than $200) Bluetoothless headset will be released and may make it worthwhile. BT -> PDA would also actually make sense, except for that small matter that 95+ % of Palms ever sold lack built-in Bluetoothless and there are still no drivers for SD Bluetoothless cards. The CLIE UX-50 and a Sony Ericsson T610 make a very nice combo that works now, unlike so much of the vaporware floating around these days.

"I find it difficult to believe that a PDA-phone as well-conceived as the Treo 600 could have omitted Bluetoothless without having a reason. This doesn't make sense, unless they ran into packaging problems."

I believe you're partially right. The Treo 600 was apparently designed to easily accomodate a Bluetoothless chip, but the decision to leave it out may have been due to the concerns Sprint has about customers using their phones as wireless modems. I doubt Handspring would have ditched the chips primarily due to expense - the chips only cost a couple dollars when bought in bulk, and Handspring knew not having Bluetoothless would lose them a number of sales, especially in Europe where Handspring is relatively unknown. We still may see a Bluetoothless Treo 6xx soon enough, since the Sony Ericsson P900 and almost every new competitive smartphone will be doing Bluetoothless. It will become a marketing gimmick in the USA, a bit like USB was initially when no useful peripherals were yet available.

Sprint's Treo 600 rollout hasn't been very well done so far. I hope AT&T is a bit more organized and has all of the bugs out of their system by the end of November. The early adopters on Sprint have already identified a number of minor issues and are coming up with some clever solutions to a few aggravations that aren't obvious at first glance. (e.g. Yesterday someone figured out how to use an old 652 byte freeware app (Off-It) to allow users to turn off the screen backlight when using the phone. Something Handspring engineers either hadn't thought of, or decided not to implement, even though this degree of control should have been included in all shipping Treo 600s.) And every day more and more apps are being tweaked to work with the Treo. Finally, a PDA-phone worth buying...

Turning off the Treo 600's screen during a call

As posted at a Treo discussion site:

- Install Off-It and map it to a secondary button.

- While in a call, leave the Phone app by bringing up another app. Then activate Off-It. Screen should turn off without disconnecting either call or speaker.

jselani @ 10/27/2003 2:51:59 PM #
Sorry, but am I the only one reading this that is wondering why you are using "bluetoothless" to mean "with bluetooth". Doesn't "bluetooth-less" suggest WITHOUT bluetooth? Very, very confusing jargon.

The Ugly Truth @ 10/27/2003 3:35:27 PM #
Sorry, but am I the only one reading this that is wondering why you are using "bluetoothless" to mean "with bluetooth". Doesn't "bluetooth-less" suggest WITHOUT bluetooth? Very, very confusing jargon.

You apparently skipped Sarcasm 101 in university.

Bluetoothless is a technology that has no teeth. No bite. It's all potential/hype and poor execution.

**//ska mode on
What is that piece of junk???
No triple CF expansion????
No wireless and bluetooth?
No 240x320 super duper hires screen?
It even lacks 6MP camera and where is the power on button?

I aint getting myself no piece of junk like that because it cant encode MPEG4 real time, no way!
I dont even have any money, gonna go play with my PPC emulator, errr I mean actual PPC device.

Damn it what a life, I feel like a Steve Balmer's bastard nephew.
**//ska mode off

Actualy I think this is going to be a very popular phone.

conflagrare @ 10/26/2003 3:36:29 AM #
Ska (AKA PurpleX) hates whatever piece of technology innovation the board is talking about.
I won't be surprised if you find an account of him in the PPC forums hating PPC's.

Konstantin @ 10/26/2003 10:58:39 AM #
Actualy if we review his postings we might be able to create a more precise picture of ska's psyche or his profile, his obsessive defiant disorder among others his has. Well most of his posts reveal a deep insecurity in himself and a deseperate need to be understood and accepted. One way we (the PIC comunity) can help ska when he is having an outburst of his, is to HUG him, graphicaly shown with curve brackets like this {{{{{{Ska}}}}}}.

The KEY to Ska is acceptance and tolerance.

Variations on a theme ...

I suspect that PalmSources upcoming smartphone version of OS 5.0 is based on the integration of Handsprings four way controller , and I also imagine that 160x160 will become common for OS 5 smartphones - it has a lower battery drain and screens under 2 inches don't need so many pixels to look good.

rc46 @ 10/25/2003 8:42:07 AM #
I have to disagree. Technology marches forward not backwards. In 3 years we will have 640x640 screens twice as bright using half the power. That being said, 320x320 will be the minimum on next years smart phones. The next Treo will have 320x320. I think that my Treo600 is better than both of these phones. I had a i500 and it is a bitch to do graffiti on that little 1-1/2" screen. The Treo's keyboard rocks. I was skeptical at first after using graffiti for that last 7 years, but now I am actually faster on the thumb board. You also got to like the built in MP3 player. Twice as loud and twice as clear as my TT.

I too am happy with my Treo 600, and look forward to upgrading to the next model in 12 months time.

Not one article has mentioned wether these phones have stereo headphone jacks or not. I do hope they can be used as mp3 players?

Otherwise, it's another reason to wait for OS6 eqvivalents, I guess.

I have yet to see a POS5 machine that can't run Pockettunes or some other mp3 software.

Freedom of Choice with Carriers with this one

IMO it shouldn't be restricted to GSM/GPRS, but I also would like to see a CDMA/PCS version of the i505 as well.