Things in the Palm world are understandably quiet now in the aftermath of the CES excitement, but there is definitely some noteworthy news items circulating around the Internets.

First off, a HowardForums post from member Scaredy reveals that that both the original CDMA Palm Pixi as well as the refreshed CDMA Pixi Plus has been approved by Industry Canada. Industry Canada is the Canadian government's regulatory department roughly analogous to the FCC in the United States overseeing areas such as wireless spectrum management and certification. These new webOS devices join the existing CDMA 8GB Pre and the HSPA 8GB Pre in carrying Canadian certification. To date, no Pre Plus or GSM Pixi versions have been approved for release in Canada, so Verizon may enjoy a period of exclusivity on the CDMA Pre Plus.

Secondly, an anonymous tipster sent Precentral a screen-grab of some server logs showing what appears to be a GSM Palm Pre and Pixi devices running WebOS 1.3.8 on the AT&T Network. Assuming this report is accurate, these devices could launch at some undetermined point after Verizon's 1.3.5-equipped webOS units slated for next week. The site is also speculating that the final retail versions of the AT&T Palm devices will have February's highly-anticipated 1.4 update pre-installed. 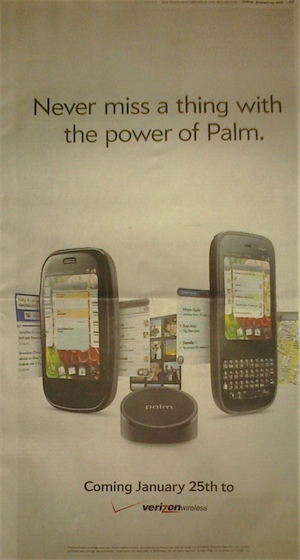 Next, we have an image of a full-page color ad from last Friday's Wall Street Journal promoting the upcoming January 25th webOS launch on Verizon. This is an encouraging sign for VZW users that their network of choice is feeling a bit more compelled to give a stronger marketing push to Palm's newest devices after several years of underwhelming support of the final Palm OS smartphones and missing the boat entirely on Palm's final two Windows Mobile Treos.

I'm waiting and will buy, if you will bring it. Pre + GSM on 1.4 version sounds great for February.
Has VZW gotten an exclusitivity period here that ATT is waiting on. Or, is Palm scheduling resources to carriers to try and launch in a manner that they can service?
My two best guesses for why the US mkt has no GSM WebOS.
Pat Horne

Reverend - i know you hillbillies are stubborn and not too bright, but why would you stick with at&t who offers nothing but a shitty network and high prices?

Womens? Pat, are you Mormon?

Plural, possessive, contractions with appostrophes.. it's all completely irrelevant here in the South!

P.S.
Gekko, if Pat's anything but a purebred Southern Baptist, I'll eat a Centro stylus!

Does the fine print at the bottom say....

1. only palm can save palm - the pre plus is a last ditch effort. notice vzw's advertising of webos devices is nonexistant?

2. I think if the iPhone (or apple's tablet project) show up on vzw, the only effect that would have on pre/pixi sales would be to illustrate how little the pre/pixi are selling on vzw.

An iPhone os device on vzw wouldn't deter palm/pixi sales at all - palm needs a compelling
reason that one would purchase a webos device over competition.

Palm allowed a bunch of sites to release reviews of the Plus devices last night/today (a few days before the Verizon launch - low-cost advertising). Most were complimentary with essentially all saying, a-GAIN, "Why buy a Pixi when the Pre is just pocket change more?".

But more importantly to THIS reader were the almost-universal comments similar to:

== "Problems aside, going back to webOS after some time apart
== reminded us of what a truly elegant and revolutionary smartphone
== platform this is"

which begs the question "Why aren't you still WITH the Pre?"

some here were blaming Sprint for the Pre's and Pixi's lackluster sales. another carrier is always a good thing but will/can Verizon get them to critical mass?

The important thing to remember IMO is timing as well as carrier adoption/support.

#1 Palm lost a lot of momentum in the nearly 6-month gap between CES '09 and the Pre's retail availability.

#2 Then lost some more momentum by being only on Sprint and not having international and/or unlocked GSM options at launch. I can understand Sprint excusively over Verizon but with a GSM Pre spotted in Barcelona in February of '09, they should have been selling them unlocked online at launch SOMEWHERE. It might not have cost them a tremendous amount of $ or marketshare but it significantly dented the MINDSHARE of Palm in the eyes of the global/non-Sprint community. Just ask poor Tim, for example.

#3 Verizon offering the WebOS devices now is only a good thing but they have already bet big time on Android. So I am sure they will sell more WebOS units than they did 755Ps and Centros...but will it be enough? As I've said here before, had the Pre (even the 8GB original) debuted in the Sept/Oct/Nov timeframe on Verizon, I know I as well as five or six people in my immediate sphere of influence would've bought one. Now, only one of those individuals is still waiting patiently on the Pre. The others bought a Droid, BB, or an iPhone.

#4. If any of the rumors are correct, anything Apple-related heading to VZW this summer will hurt Palm's chances on that carrier. The Feb-May timeframe will indeed be critical for Palm as far as Verizon sales are concerned.

#5 Ruby's recent comments, alongside NO rumors or leaks of any forthcoming WebOS products is quite troubling. There is the reported "C40" we saw from a Sprint inventory screen a while back but that could end up being a typo or simply vaporware like the Treo 500v successor. Palm could up the Pre Plus to 32GB and give it an 800Mhz CPU and it'd still be constrained by its tiny keyboard, cramped, coarse screen, and feeble battery.

#6 The critical items for 2010 are large, high-resolution screens and/or AMOLED, decent battery life, 1Ghz+ CPUs (ala SnapDragon) and good onscreen keyboards. Palm really needs to come up with an enlarged Pixi with a classic Treo keyboard, microSDHC slot, and at least a 3.5" LCD to compete with the Droid, Nexxus One, HTC's various offerings and of course the June iPhone refresh. A global CDMA/GSM hybrid WebOS device wouldn't hurt Palm's standing in the business world either.
Pilot 1000->Pilot 5000->PalmPilot Pro->IIIe->Vx->m505->T|T->T|T2->T|C->T|T3->T|T5->Zodiac 2->TX->Verizon Treo 700P->Verizon Treo 755p->Verizon Moto Droid

if you make me choose between -

trust me that slider is a PIA and gets old quick.