During the PalmSource Euro DevCon 2004, NormSoft and GlooLabs announced a partnership to launch a service that allows mobile users to navigate and listen to their home music collection using the Pocket Tunes Deluxe application. 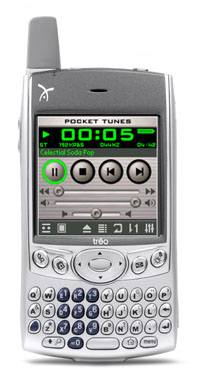 The Pocket Tunes service for Palm OS will allow users to browse their music collections and playlists stored on any home computer. The selected music can be streamed to any Palm Powered smart mobile devices via WiFi hotspots or mobile data services. Users will have access to their entire music collection wherever they may be, without requiring significant memory on their Palm Powered smartphone or wireless handheld. The service will automatically transcode music files stored on the home computer to an appropriate rate based on the available bandwidth.

To be released in Q4 of 2004, the service will be hosted by NormSoft and powered by GlooLabs GlooNet technology.

This GlooLabs powered service will bring an entirely new value to the streaming capabilities of Pocket Tunes Deluxe, said Mark Belliveau, director of business relations at NormSoft. No longer will users be frustrated having to decide which audio files to copy to their Palm Powered smartphones or wireless handhelds.

Imagine turning your TreoTM 600 from palmOne into a wireless, MP3 player with access to your entire home music collection, said David Arfin, CEO of GlooLabs. With GlooNet and Pocket Tunes, users will be able to listen to their music anytime, anywhere.

A9700rO @ 10/7/2004 2:50:57 PM #
Nice, very nice indeed, but still, if you decided to listen to your music via the wireless streaming, would that not hurt the batteries even more than the external storage does? not to complain or anything, but I just felt I should point that out, PalmOne should bundle PocketTunes rather than the crappy RealOne.

As for Palm bundling another mp3 player? What I'd really love to see is Palm and Apple getting together and bringing a version of iTunes out for the Palm. Now that would be a wild combination.

I've been fantisizing about palmOS on my iPod: love the iPod formfactor, harddrive and touchwheel/touch button UI. As these micro drives are available in larger capacities (http://www.palminfocenter.com/view_story.asp?ID=7189), there can be some room for more PDA guts.

"You got your chocolate in my peanutbutter..."

P.S. Does the above advert reference mean anything to anyone?

Why? If you really want the iTunes interface on your Palm, just get the iTunes skin for Ptunes and your set! ;)

Altema @ 10/8/2004 1:15:28 AM #
Yes, your home computer would need a network connection. The bitrate (quality) will be determined by the slowest link, whether it be your cellular connection or your home PC connection. And yes, you BETTER have an unlimited cellular data plan!

In regards to iTunes; no, changing the skin on Pocket Tunes is not the same thing as being able to play iTunes songs using Pocket Tunes. Apple will not even respond to inquiries on this, their profits are in selling or licensing Apple hardware/technology.

Pocket Tunes already can stream music via ShoutCast, so this ability is the icing on an already wonderful cake.

RE: Smart Playlists on the Palm

moot @ 10/8/2004 8:16:01 AM #
On the subject of having Smart Playlists on the Palm, I've actually been brainstorming on this for my next Palm application. iTunes stores all library information in an xml file, so on the PC side, it wouldn't be terribly difficult to build a conduit that parses this xml data and selects songs based on smart playlist parameters. Where I'm getting stuck, is on the Palm side. In order for the Palm to modify the data on the PC like the iPod does (play count, last played, rating, etc...), I would have to basically build my own mp3 player software to keep track of what is played, which I don't really want to have to do. If I could somehow intercept another program's data to find out what is playing, then maybe I could just make a small app to sit 'on top' of another mp3 player, but even that is proving difficult to even get started on.

The best I might be able to do is load the Palm with songs from a smart playlist, but not update those songs later with the Palm statistics for playback. But for people like me who just use iTunes for library management and not for listening, then that wouldn't be much of a help.

Apple has licenced their DRM technology to Motorolla to bring iTunes to cell phones, so I can only hope that Palm will be included eventually.

Oh, and the idea to write a conduit that updates the iTunes XML whenever you hotsync? Awesome idea! I wish I thought of it first! :)

GlooLabs @ 10/28/2004 2:09:42 PM #
The Pocket Tunes service will have the ability to use the iTunes smart playlists. The software that you install on your desktop works with iTunes, so all your playlists (and the smart playlists) will show up on your Treo.

Chocolate in my peanut butter

RE: Chocolate in my peanut butter

Hal2000 @ 10/7/2004 8:07:32 PM #
Why not create a great palm software like this to contol your home music files, volume, playlists from your pocket via WIFI. This would be great for everyday, parties.
BTW pocket tunes on the Zodiac is amazing- Greatest hardware/ background contol anywhere. Audio Quality competes with anybody.

panasher @ 10/10/2004 10:25:07 AM #
Have you discovered the Palm program, RP3? It allows you to control WinAmp to play music on your home computer from your Palm over Wi Fi or other connections.

I think only the first version of RP3 is out and it could use some improvements, but it has changed my life. My speakers are in one room, but my stereo equipment is in another. It has been quite a hassle over the years to go back and forth between romms to control my music. Now, I do it wirelessly anywhere in the house over Wi Fi using my Palm Tungsten C. (I put half of my CD collection on my computer to do this. I converted my CD tracks using the FLAC format, which is lossless. I used dbPoweramp to do thid. It is a free download.)

Rp3 is available from: http://empiresource.com/

In fact, once they do, look for iTunes and the like to license their DRM for this type of service. It's closer than you think...

shufuu_reloaded @ 10/8/2004 6:37:19 AM #
It's possible to do this currently using the OpenSource Slimserver software from Slimdevices here :-
http://www.slimdevices.com/
It actually works off of your iTunes database, which let's you do nifty things such as browse your music collection via their Album covers, which I'm not sure you can do in iTunes itself.

I have a Tungsten T (first one) and have so far been able to listen to my music around my flat via a bluetooth LAN connection to my home pc, at my office in work, over a company firewall and through the D-link DSL Router which I have at home, and lastly, via bluetooth and gprs over an old Siemens S55. It's pretty nifty.

The only Palm software I've found that can play streams is the PocketTunes deluxe version, which I'm loathe to buy, since I've already bought Aeroplayer for mp3 playback, and would hate to have to buy another mp3 software. Does anyone know of any more?

Additionally, you have to have a dynamic dns service if you don't have a static ip address. I used the No-IP one here :-
http://www.no-ip.com
which is free, and is directly supported by the D-Link Router, so I don't have to install any more software on my homepc.

The only drawbacks are, beside the tremendous costs of actually streaming music via gprs, are that to actually choose you music playlists, you have to use the webinterface, so you have to exit Pockettunes, open up your browser, choose the playlist, etc; There's no way to control it from within the mp3 software, but I guess that's asking too much, especially since the whole setup is pretty much free.

Ps, I don't work for any of the companies above. I just read this news article, and after my experiments in getting the same thing up and running with virtually no-cost (before Pockettunes that is), I felt other people should have a go too.

cbowers @ 10/12/2004 4:05:21 PM #
False claim alert.
Mmplayer has done streaming audio for quite some time, perhaps even first. The only innovation here is the transccoding of bit rates based on bandwidth. But that's useful only for the GPRS folks. Using Wifi on my tungsten C, I just take them as they are.

RE: What's the use