With the introduction of the new Tungsten T5, some of the prices in the current handheld lineup have been reduced. Both the T3 and the Zire 72 can now be found for $50 less. 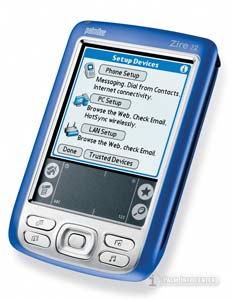 Zire 72 Rebate
The Zire 72 (review) is now $249 after a $50 mail in rebate. The rebate is valid in the US and runs until February 5th. The Zire 72 features a built in 1.2 Megapixel camera and Bluetooth wireless with a 312 MHz Intel processor and 32MB of RAM. The Zire 72 was announced in late April this year.

Bargains on these and other handhelds can always be found via our Price Comparison shopper as well. Many varying discounts are also available on the Treo 600 Smartphones for each carrier.

Hotoru @ 10/6/2004 2:45:39 AM #
I predict that the T5 will quickly be bundled with the SD WiFi card for $399. I think one of the moves of the internal flash memory was the ability to advertise 256K and the ability to use the WiFi SD card and still keep the flash memory.

I think Palm has basically conceded the "war" for the high end handhelds. Perhaps, it is a better business decision to go after the more mainstream market (Zire and TE are best sellers). One could argue that Sony was the best at offering the most hi-end options and see how well they did in the US.

Palm will probably focus their efforts on the Smartphone market which has more room for growth. I do agree that the T5 should really be a TE2 and priced at least $100 less (a price point it will likely reach soon).

I totally agree with the above poster and said the same thing yesterday on Mobileread (or was it 1src?). Palm is devoting all their talent to smartphones because that is where the future lies. When the Treo 650 comes out, guess who will be putting their Nokia 3650/Zire 72 in the drawer? Until then, the Zire is an excellent PDA.

What I would like to see is some smart third party manufacturer come up with a hard case that includes a protective sleeve built into the case to cover up the exposed WiFi card.

I would however would love Palm to progress more in its handhelds. It seems to me that for power users they are taking 3 giant steps back-not good.

That would probably be the best way of saving face, but I hope it does not take them months!

Of the 6 T series my family has owned, only one had a screw come loose. Ironically, unit six was a T3 refurb replacement, and I had the impression that the T3 screws being loose was a myth. Then on day two, I felt something odd in my pocket like a large grain of sand. It was a screw! That was a refurb which also had a weak battery, and also a loose slider, and also a sub-standard vibrator. I re-installed the screws properly and they never came loose again. Incidently, this same unit is being replaced today for a digitizer problem that began just weeks before the warranty expired. Gotta beware of refurbs, but palmOne support was right on time.

screws falling out of Tungsten T3

saintbrendan @ 1/20/2005 10:13:46 AM #
tthiel,
You're right; it's no myth. I just lost a second screw from my T3 today.
On a positive note I called PalmOne and they agreed to ship me out a foursome of screws. They were pretty quick; no questions asked. And the PalmOne rep on the phone was very courteous and professional.

ackmondual @ 10/12/2004 2:01:22 AM #
Isn't the memory used for PDA internal RAM *much more* expensive than even the type used on SD cards? If that's the case, having 256MB of memory may explain T5's high price. Otherwise, they really are milking their customers.

As for as the naming scheme goes, I still have gripes with the Z72. A Z71 but with a higher MP digicam and mem would be a suitable Z72, but with an OS update, PIM update, BT, vid cam, and VR, it oughtta be called Z81, or Z82.

I don't like the T5 name either. Even if you ignore the fact that every1 agrees it oughtta be called a TE2, It's not a successor to the T3, but an alternative (it can't be with those features at that price)

I really want wifi (would let me sell my dell axim for one thing) but really want it builtin... the card sticking out is just asking for breaking off. Also its longer than standard SD cards so it wont fit into the slots in most hard cases.. makes carrying / using it a pain IMO.

KayAU @ 10/6/2004 9:10:15 PM #
It would also include a whopping 10MP built-in camera, which will be using the same lens as the Z72 (the one which only gets sufficient lighting to take half-decent photos when held within 5 metres of the surface of the sun itself). And it won't have a reset button or infrared. However, you might find that the new universal connector (not compatible with previous universal connectors) make up for that.

Oh, and the unit will of course feature a high-quality casing, made of sexy green cardboard. :-)

nikaaisha @ 10/6/2004 10:07:31 PM #
Honestly, I think that have a solid deal with the Zire 31. I felt that they handled the transition with the Zires properly...The only way that I would even consider investing another PDA right is if Colbalt is included in the Zire but a girl can only dream!

PalmOne vastly overprices their products. I hate the waiting game, but you have to play or PalmOne will take you for a ride. This TE2 (what the T-5 should really be called) is going to be on sale for for around $250 by Christmas (supposing they get a production version that doesn't fall apart as soon as you get it.) Next Spring it will be Zire 73 $300 list. By next Fall it will be $200--my new maximum for any PDA. They simply don't cost that much to make and I am not on this planet to make PalmOne execs rich.